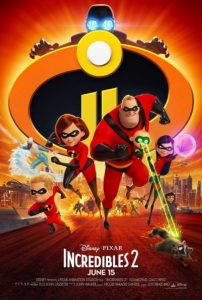 Pixar almost never fails to entertain me. Last year’s Cars 3 was one of the few low points. I love superheroes, so when Pixar introduced The Incredibles to moviegoers, the feature film hit a sweet spot from one of my favorite motion picture companies. Setting up future adventures by giving baby Jack-Jack super powers, The Incredibles left me wanting more from this family of superheroes. Unfortunately, Incredibles 2 doesn’t advance the story quite as much as it should have and instead seems stuck in limbo as The Incredibles 1.5. Teasing what could have been doesn’t salvage what is. Incredibles 2 needs more Jack-Jack and less humdrum.

Writer/director Brad Bird has a great résumé of animated films, including The Iron Giant and Ratatouille. Bird expanded into live-action fare with Mission: Impossible – Ghost Protocol and the disappointing Tomorrowland. Hopefully, he’ll rebound from Incredibles 2 for more entertaining projects. Bird’s skills as a writer and director aren’t all that he can do, and he voices the Linda Hunt-like advisor Edna Mode. Indeed, Edna’s scenes are some of the best in the film, so Incredibles 2 could benefit from more Edna as well as more Jack-Jack.

Incredibles 2 picks up immediately after The Incredibles despite the 14-year gap and inexplicable loss of the word “The” in the title. The titular family includes Bob Parr/Mr. Incredible (Craig T. Nelson), Helen Parr/Elastigirl (Holly Hunter), Violet Parr (Sarah Vowell), Dashiell “Dash” Parr (Huck Milner) and Jack-Jack Parr (Eli Fucile). The family fights against the Underminer (Pixar regular John Ratzenberger) and then gets promptly detained because “supers” are illegal. Cut free from their handler, the Parr family doesn’t know what their future will hold until Winston Deavor (Bob Odenkirk) and his sister Evelyn Deavor (Catherine Keener) of DEVTECH hatch a plan to make supers relevant and necessary for society. The focus will be on Elastigirl while Mr. Incredible plays Mr. Mom. Eventually, a new villain known as the Screenslaver rears his head and complicates things for Elastigirl and the Parrs.

The Incredibles 2 actors rank high among animated film casts. Nelson and Hunter cause that instant recognition as much as Tom Hanks and Tim Allen in the Toy Story series. Vowell has Violet’s teen angst down to a science, while Milner replaces the original Dash voice actor because, well, 14 years have passed and that child actor went through puberty. Odenkirk matches some of his smarmiest roles, while Keener deadpans with the best. Incredibles 2 features a small group of other supers collected by Winston, including standout Sophia Bush as Voyd. Samuel L. Jackson returns as Lucius Best/Frozone and performs lines as only he can. Character actor Jonathan Banks of Breaking Bad and Better Call Saul delivers the real treat as the Parrs’ handler Rick Dicker. There are lots of theories of how the Pixar films are all connected, but Dicker might be part of those theories because of how much he looks like a relative of Carl Fredricksen of Up. Hmm…

The animation for Incredibles 2 wows from the start and the transformation of the familiar Disney castle and Pixar logo to themed red versions. The style of the series exaggerates and rounds characters and environments. Taken for the animation itself, there are lots of beautiful scenes and moments. The Parrs’ new house has plenty of eye candy and fun features like water under the living room floor. My favorite bits involve Jack-Jack and a raccoon and Jack-Jack and Edna. Jack-Jack has powers unlike all of the other supers and can shoot lasers, disappear and transform himself to name a few. The exploration of those powers leads to exciting animated sequences.

The main reasons for my ho-hum reaction are the length and the dead spots throughout that length. The opening scenes with the Underminer kept me on the edge of my seat, and that’s what I wanted to feel for the rest of the two hours. Instead, the supers are still on the outs, and the movie gets stuck in a morass of family fights and problems. Nobody wants to see Superman paying his bills, and I don’t want to watch these superheroes work out their issues. Violet goes violent as she throws a temper tantrum every other minute. Even worse, the boring villain made me hope for a revival of the charismatic Syndrome. Violet’s relationship with a potential boyfriend adds to the messy family stuff and actually takes the movie to a very sad place instead of the laughs and action that I would expect.

I haven’t given up on The Incredibles yet. Even if it takes another 14 years (hopefully sooner), this series deserves a better sequel. Michael Giacchino’s music and superhero theme make the film so much better, and here’s one movie where you want to stay through the credits not to see extra footage but to instead listen to the catchy, jazzy, memorable music. Bird has other projects in the works, but Edna lives inside him and will most certainly inspire him again, darlings. 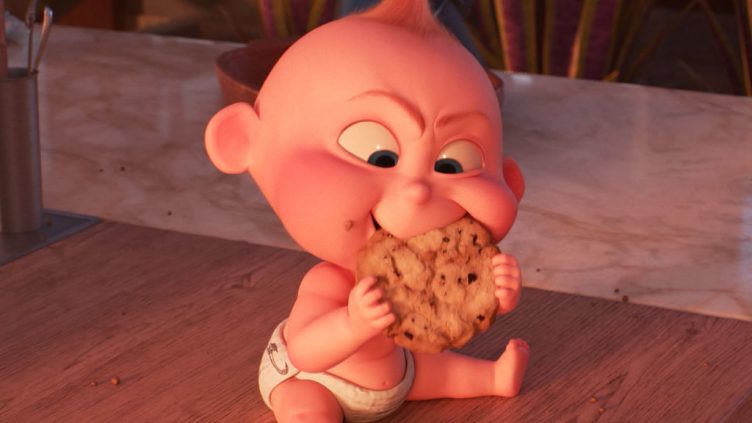