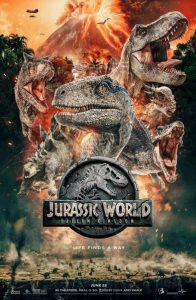 Ian Malcolm (Jeff Goldblum) explains chaos theory while warning people about cloning dinosaurs in Jurassic Park. Of course, nobody listened, and they still haven’t figured it out after many tragic incidents. Jurassic World rebooted the franchise with a new trilogy, but I didn’t feel totally thrilled despite some great moments. In comparison to the original Star Wars trilogy, Jurassic World: Fallen Kingdom gets most things right and surpasses its predecessor much like The Empire Strikes Back. With some slow spots near the beginning, the film picks up steam and keeps going at full speed until the thrilling finale. Jurassic World: Fallen Kingdom embraces chaos as it explores what happens when dinosaurs can no longer be contained.

Director J.A. Bayona joins the franchise for his first film, and he may have just delivered the best so far. Bayona was responsible for The Orphanage, one of my favorite ghost stories, and also directed the ambitious and emotional The Impossible and A Monster Calls. Cowriters Derek Connolly and Colin Trevorrow reprise their writing duties from Jurassic World, and some questionable choices of theirs are the only bad elements of the movie. After an amazing prologue, Jurassic World: Fallen Kingdom picks up three years later when Claire Dearing (Bryce Dallas Howard) runs the Dinosaur Protection Group and Owen Grady (Chris Pratt) contentedly works on his house in the middle of nowhere. Isla Nublar served as the site for both the original theme park and the remade one, and an active volcano threatens all of the dinosaurs left behind. Eli Mills (Rafe Spall) works for Benjamin Lockwood (James Cromwell), a partner and friend of Jurassic Park creator John Hammond. Mills recruits Dearing to save the dinosaurs, and she enlists Grady to track Blue, one of the Velociraptors that he trained. What could go wrong? Absolutely everything.

Leads Howard and Pratt provide the heart of the film and believably handle one bad situation after another. Cromwell’s commanding presence should have earned him more scenes instead of a small role. Spall feels like he took over a role written for Ryan Reynolds given his smarmy nature and neat good looks. Most of the human characters come off as misguided or even evil, including Toby Jones with a weird accent as a marketer complicit with Mills and Ted Levine as a brutal hunter with a singular objective and no tolerance for loose ends. Fortunately, new standouts in the cast provide some hope for humanity. Dearing’s colleagues Zia Rodriguez (Daniella Pineda) and tech guy Franklin Webb (Justice Smith) save the day and get their standout moments. Geraldine Chaplin makes a welcome appearance as Lockwood’s assistant Iris. If you’ve seen the trailer, you know that Goldblum also returns.

Trailers are fair game for discussion because they’re shared so often, so it’s not a spoiler to discuss what’s in them. Unfortunately, the marketing staff produced at least one trailer that ruins Goldblum’s moments in the film by showing all of them in the trailer. You shouldn’t go into the theater expecting to see a lot of Goldblum despite his efforts to promote the movie. His appearance amounts to an extended cameo or a small role. How would you feel if they featured Stan Lee’s cameo for any Marvel movie in the trailer? That’s what I felt after the screening. What could have been a great surprise appearance was instead reduced to a bad marketing ploy.

My other complaints about the film all deal with some lazy writing and plot choices. It’s established early on that Webb — a terrible name for a computer expert — fears the T. rex. What do the writers do? They repeat this fact over and over again until the inevitable scene when Webb has to face his fears. After falling on the wrong side of Levine’s Ken Wheatley, how do Dearing and Grady manage to sneak past Wheatley’s cohorts and not manage to be seen? Even worse, Dearing grabs a hat and pulls it low on her head in a silly movie convention that’s almost as bad as Clark Kent wearing glasses to not be recognized as Superman. I could forgive some of these missteps, but when people who know the power and danger of these dinosaurs leave cages open or unlocked, I have to throw up my hands. Fortunately for the writers, these plot sinkholes and a dull sequence near the beginning are overwhelmed by the pure excitement of the rest of the movie.

The dinosaurs are the real stars of Jurassic World: Fallen Kingdom. When I got bored, all that I could think was that I wanted lots of dinosaurs. My wish came true. Although the characters were sent to Isla Nublar to save 11 species of dinosaurs, it feels like there are a lot more visible here — from those tiny, cute, bouncy ones that swarm and overtake their prey to the T. rex and Blue the Velociraptor. The star dinosaur Indoraptor combines the best abilities of the Indominus rex introduced in Jurassic World and the Velociraptor. Like Jason Voorhees in the Friday the 13th series, the Indoraptor never gives up and uses all kinds of attacks and methods to pursue our protagonists. Not all of the dinosaurs are bad guys, so in addition to Grady’s friend Blue, there are others that help out. One of these dinosaur heroes also provides comic relief. Bayona re-creates one of the best scenes from Jurassic Park — the kitchen scene with the kids — in a museum instead. This bit pays homage to the original while stepping it up a notch.

Following the great soundtrack for Incredibles 2 last week, Michael Giacchino surpasses his own work with the outstanding score for Jurassic World: Fallen Kingdom. Full of tense moments and booming horns, Giacchino even throws in a choir at key moments to almost but not quite go overboard with how crucial the soundtrack is for the experience. The music serves as the icing on the top of this thrilling ride, and you will want to see this film in a theater again as much as I do right now. Stay through the credits for a sneak peek of where the trilogy will end up. If done right, the next movie may just fully show the chaos of dinosaurs in the wild as well as among us. 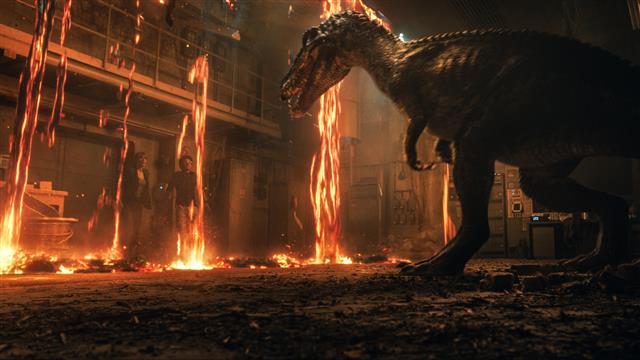