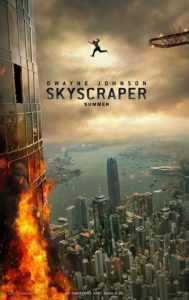 Dwayne Johnson possesses undeniable charisma, personality and presence. Duct tape provides solutions to many everyday problems. Put the two together, and you have a combination that should be able to squeak through any real-world situation. Unfortunately, Skyscraper doesn’t live in the real world. The film makes you roll your eyes more than any James Bond or Tom Cruise film. With Johnson’s likability one of the few saving graces, audiences will endure this ridiculous movie only to see if it gets better or worse. Skyscraper limps along like Johnson’s character to its predictable conclusion and leans more toward unintentional comedy than summer blockbuster disaster movie.

Writer/director Rawson Marshall Thurber’s previous films (DodgeBall: A True Underdog Story, We’re the Millers and Central Intelligence) were comedies, so it’s no surprise that Skyscraper feels like a comedy. Maybe I wasn’t supposed to laugh, but when faced with silly plot points, I couldn’t help it. Thurber the director presents a slick combo of action and disaster that aims to be the next version of The Towering Inferno. Thurber the writer exhibits such laziness that the plot feels like the first draft of a script for The Blundering Inferno. Will Sawyer (Johnson) switched from FBI agent to security consultant after a mission went wrong 10 years ago and he lost a leg. His latest project has taken him and his family (Neve Campbell, McKenna Roberts and Noah Cottrell) to Hong Kong to certify The Pearl, the tallest building in the world and creation of proud billionaire Zhao Long Ji (Chin Han). When creepy bad guys led by Kores Botha (Roland Møller) set fire to the structure, Sawyer must save his family as well as Zhao and the building if possible.

Johnson somehow brings life to this nonsense because of his commitment to this part no matter how awful. At one point, his character says, “This is stupid.” Yes, it is, and that would make a great tagline for the first poster that generated its own memes with the impossible physics problem that the image presents. While Johnson polishes this turd, Campbell delivers both breeziness and strength as a former naval surgeon whom any man would want as his wife. The naturally expressive Campbell has been away from the big screen for a few years, and it’s about time that she returns. Møller and others fill the bad guy roles well, but the criminals ultimately contribute little more to the movie than flammable material and some fight scenes. This is Johnson’s party, so just buckle up and enjoy the ride.

It’s too easy to find fault with Skyscraper when it contains a sky-high list of problems. From a face-recognition security tablet that doesn’t automatically lock after minutes of no use to a scary elevator with no practical mechanism, there are issues to test your stamina around every corner. Giving Sawyer’s son asthma and an inhaler invites criticism. A fight scene in which Sawyer loses his leg and hops around comes off as a Monty Python skit and encourages the alternate title Limp Hard. Sawyer uses his precious duct tape on everything except to keep his fake leg attached to his body. The movie lost me at the point when Sawyer climbs a 100-story crane in minutes on the outside of the structure and pulls off some American Ninja Warrior-like moves at that height. I’d almost give the filmmaker the benefit of the doubt if he kept things somewhat in reality. Despite Thurber bragging that “we did the math,” that famous jump from the crane to the building would likely take off an arm or at least a hand from the impact. If Sawyer had lost both an arm and a leg, that would be a movie.

Skyscraper has a few saving graces beyond the casting of Johnson and Campbell. The outstanding special effects make an imaginary building realistic. The titular feature of The Pearl boasts thousands of flat panels on both sides of the surface to make a sort of holodeck in which the screens can generate any image or simulate what it would look like if you stood in midair at that height. The stunts keep you on the edge of your seat even if you’re laughing like me at their preposterous presentation. The fire effects mix actual flames and CGI as a thrilling backdrop for action and breathtaking danger. As a spectacle, Skyscraper succeeds.

The scariest line in the film consists of one word and leaves a door open for a sequel. With a second San Andreas already on the way, Thurber could take the bad and make it workable by just adding Kevin Hart to the cast as Sawyer’s assistant and embrace the comedy that he knows so well. Until that happens, I just can’t recommend Skyscraper unless you know what to expect going into it and want to escape with Johnson for a couple of hours anyway. 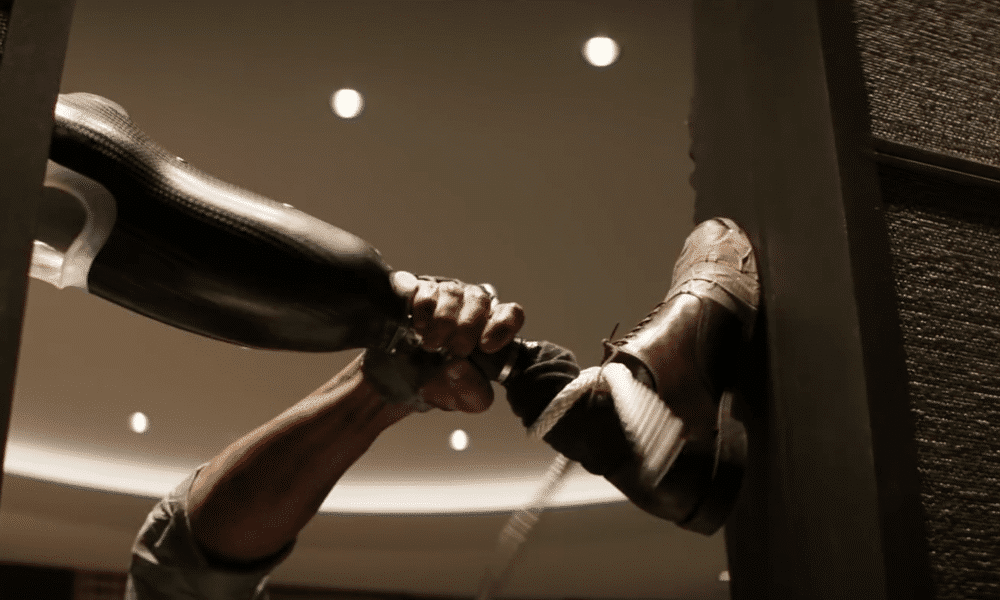