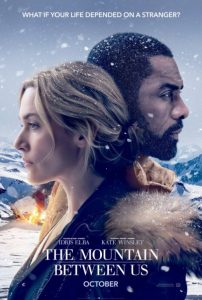 People react strangely during a crisis. Depending on the tests involved, some people bend and adapt, while others break from the pressure. Plane crashes lead to their own brands of crises. If the people involved survive the initial crash, then the resultant situations drive the narrative depending on the constitution of the survivors. Many films dealt with plane crashes and their aftermath; notable entries are Alive, Cast Away and the recent Sully. Although the double meanings of the title feature heavily in the plot, the real elevation in The Mountain Between Us exists between the audience and the story’s believability.

I didn’t know that there is a subcategory of romance novels called “romance-disasters” until now. This plot type arises from the growing affection that can develop between people in the middle of a disaster. Attraction occurs in films like Titanic and The Poseidon Adventure, but I would consider those love stories that happened anyway regardless of the impending disasters instead of because of them. The filmmakers involved bring all of the right skills to this project. Director Hany Abu-Assad’s dramatic forte includes titles like Omar, The Courier and the unforgettable Paradise Now, although his last film The Idol strayed from his more serious path. Cowriters J. Mills Goodloe (Everything, Everything; The Age of Adaline; and The Best of Me) and Chris Weitz (About a Boy and the live-action Cinderella as a writer and The Twilight Saga: New Moon as a director) adapt the Charles Martin novel and contribute their experience in romance and drama. I can’t entirely blame the filmmakers for my tepid response, so it must lie with the necessary plot elements that carry over from the book.

Surgeon Ben Bass (Idris Elba) and photojournalist Alex Martin (Kate Winslet) are stranded in an airport in Boise in December with urgent needs to fly out despite the overbooked flights. Ben has to perform critical surgery in Baltimore the next day, and Alex’s target the next morning is the altar for her wedding. Alex overhears Ben’s pleas with an airline agent and suggests that they join up to book a charter flight. The next thing that you know, a tragedy befalls them that leaves them crashed on top of a mountain in the snow. Over the course of days and then weeks in the middle of nowhere, Ben and Alex overcome obstacle after obstacle to reach civilization and amazingly develop feelings for each other along the way. Elba and Winslet believably convey emotion and determination, so the best part of the film is watching them work. Elba retains his natural British accent, but Winslet dons one of her flawless American accents that she can turn on and off like a light switch.

I liked a little more than half of The Mountain Between Us. In particular, the survival elements kept me interested. Specific goals of increasing difficulty challenge Ben and Alex, and those aspects of the characters’ ordeal hooked me from the start. Beginning with treating injuries and gathering food and water, the pair strives to leave the mountain, find shelter and eventually look for civilization. The details of their adventure expose their strengths and flaws and open the door to the sparks that fly. Chemistry makes or breaks cinematic romance, and Elba and Winslet just don’t have it. Sure, petty bickering about nonsense and more substantial disagreements about how to proceed drive the titular wedge between the two, but I didn’t believe the development of such strong affection after only a few weeks’ separation from Alex and her wedding day. My guess is that the novel drops little moments like bread crumbs that build to something more. Instead, the filmmakers went with an awkward encounter that lost me for the rest of the movie.

I would be remiss if I didn’t mention the fine work of the two canine actors that portray an unnamed dog that crashes with Ben and Alex. Although conveniently off chasing something for some screen time, the dog trudged along with the leads through the snow and earned every bone or special treat when the director yelled, “Cut.” Look for a neat scene that echoes the one in which Winslet posed in Titanic, but this time, her character captures the moment. Shot on location, cinematographer Mandy Walker shows off the beauty and danger of the snow-covered mountains and valleys; the environment very much establishes the scenes and the quietude of an unpopulated expanse. Although The Mountain Between Us aims to start a raging fire of emotions to sustain its characters, it feels instead like dying embers that everyone involved tries to desperately blow back to life. 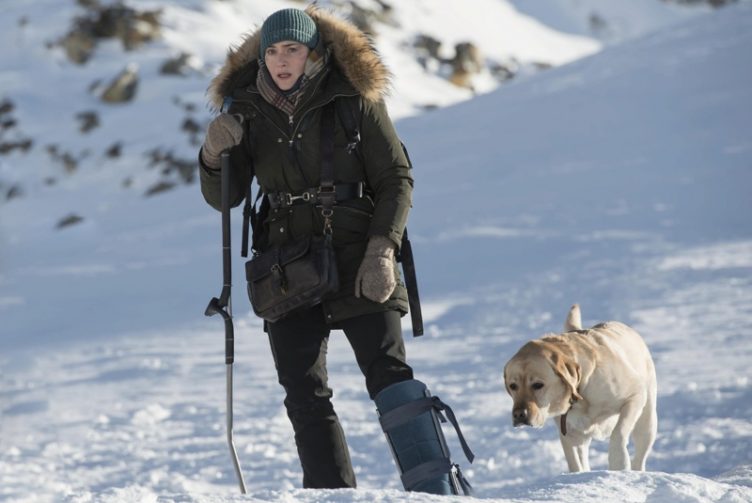