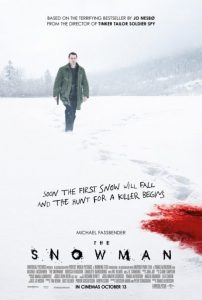 The best serial killer films feature an engaging killer and/or a compelling puzzle for the hero to solve. When they have both, you end up with an iconic masterpiece like The Silence of the Lambs. The chill of Oslo, Norway, should generate the perfect setting for a serial killer on the loose, so I expected great things from The Snowman. Unfortunately, too many elements took me out of the film and forced me to question motives of the characters and choices by the filmmakers. What should have been an edge-of-your-seat thriller dissolved into a mediocre crime drama. Despite an exciting finale, the plot and believability of The Snowman melt away to nothing over the course of the film.

By all accounts, the filmmakers involved should have delivered a captivating movie. Director Tomas Alfredson’s last two movies (Tinker Tailor Soldier Spy and Let the Right One In, the best modern vampire story) were outstanding. The credits for the writers cover a variety of successful films and the popular TV show The Killing. The Snowman marks the first appearance of author Jo Nesbø’s Oslo detective character Harry Hole, the hero of 11 novels, and based on my experience, it may just be his last. Hole (Michael Fassbender) has fallen into a rut and itches for a new case. When a woman goes missing, Hole suspects a serial killer elusive for many years whose calling card is a creepy snowman at every crime scene. Hole teams up with detective Katrine Bratt (Rebecca Ferguson of Mission: Impossible – Rogue Nation) to catch the killer at the same time as he tries to maintain a friendly relationship with ex-girlfriend Rakel (Charlotte Gainsbourg) and her son.

The cast surpasses the resultant quality of their film. Fassbender may be best known for Magneto in the X-Men franchise, but he demonstrates a strong presence in all of his projects, including the most recent Alien: Covenant. Ferguson holds her own against Fassbender, and she digs deep for some scenes, including a sequence in which she feigns seduction to obtain information. Gainsbourg ranks as one of the most interesting actresses with some of her past projects, so it’s nice to see her in The Snowman even though her Rakel is a more conventional character. Val Kilmer is good but practically unrecognizable. There’s ironically not enough of Chloë Sevigny despite her role. I dislike J.K. Simmons as a creepy businessman trying to bring a sporting event to Oslo, but that’s probably what I’m supposed to feel. I still haven’t figured out why all of the characters speak with English accents, but I just accepted that as a movie convention similar to Shakespearean actors.

A serial killer should constantly taunt the protagonist with bodies or the threat of new victims, and there simply aren’t that many murders involved over the course of the film’s timeline. The killer’s actions go back many years, so there’s no immediate urgency to solve the crimes as if the detectives will fit in their investigation when they can. When a clock’s ticking, the plot strongly benefits. Even worse, the silly motivation for the killer makes no sense when the identity is revealed. Revenge, financial gain and women of a certain type all pass the smell test for a killer’s compulsions. Don’t expect something that logical.

A thriller should maintain a fast pace and only use lulls in the action to deliver information and let you catch your breath before the next wave of action or violence. The Snowman might instead put you to sleep because it’s quiet and dull until the end. Even a sex scene doesn’t raise the heat above the frigid Oslo temperatures. Marco Beltrami’s scores normally energize his films; he’s off his A game here with quiet music that contributes to the boredom until, again, the finale. The R-rated subject matter belies the fact that the proceedings feel like a TV movie or a crime show’s special extended episode. What should be thrilling left me as cold and wet as the exterior shots of Norway. Are interior windows into bedrooms from hallways or between bedrooms a thing in Norway, or was that just something invented for the novel/film?

When I watched the trailer for The Snowman, I couldn’t wait to see the full film. Afterwards, I have to ask what happened to the movie that the trailer promised, so kudos to the editor for the trailer. The detectives have neat tools like a supercomputer that acts as a laptop and plugs into a car; it reminded me of a Nintendo Switch. Even with such tools and detective brains using them, there’s at least one example of deus ex machina that ruins the plot. I can’t help but notice that the setting and story are meant to evoke The Girl with the Dragon Tattoo. Instead, The Snowman might just bury Hole before his character catches on. 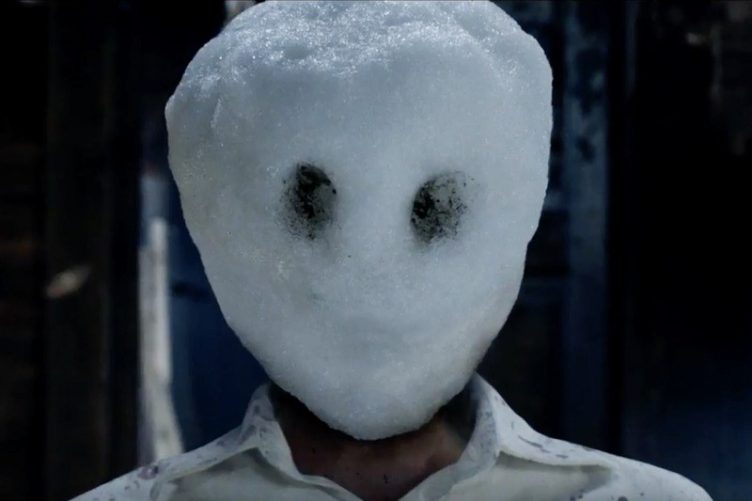