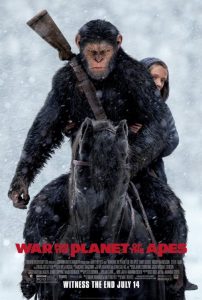 An unwanted conflict drives simians and humans to a final winner-takes-all showdown in War for the Planet of the Apes.

I’ve been a fan of the original 1968 film (although not its sequels) since childhood. When Tim Burton decided to revisit the story in 2001, I crossed my fingers and hoped for the best. His version was so disappointing that, when the 2011 film materialized, I literally had no interest in it. I begrudgingly put my reservations aside and found myself mesmerized by Rise‘s uniqueness and undeniable charm. The 2014 sequel was an even bigger triumphant surprise.

While not quite up to the level of Dawn, the current film works wonderfully as either the conclusion to a solid trilogy or a wonderful launching pad for what comes next — a full circle back to the 1968 story line. War is darker and more ominous than the other films in both visuals and tone. It gives us a Caesar (Andy Serkis) fed up with the futility of his more pacifist approach to humanity. This provides a chance to explore our own inner demons when we opt for the emotional payoff of bittersweet revenge. Its biggest failing is in forgetting that the story is at its best when the antagonists are as complex as the heroes. The bulk of humans in this installment — led by a singularly-focused, short-fused Colonel (Woody Harrelson) — are purely one-dimensional.

This film is never better, by a wide margin, when the camera returns to the simians. Caesar’s search for a permanent solution has the epic nature of The Lord of the Rings. It’s a tense, foreboding tale with a haunting soundtrack and noteworthy CGI effects. Perhaps the biggest compliment that I can offer up is that these are a film and a series that made me cheer for another species to reign supreme over that of my own. 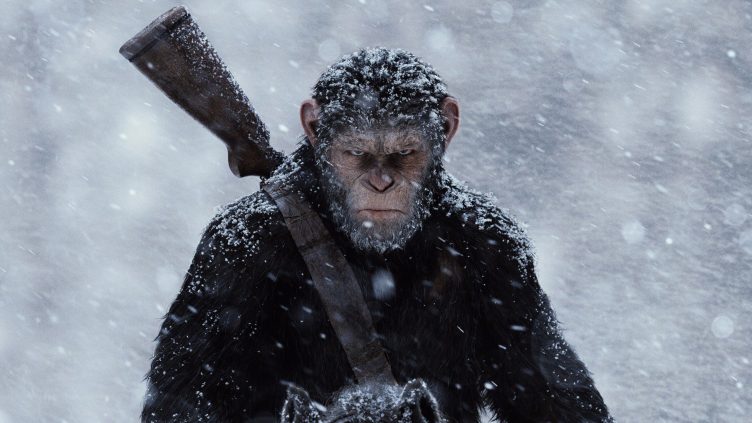