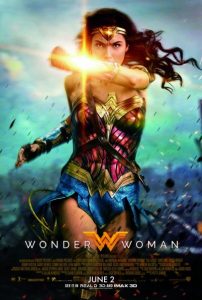 I was one of those few people who thoroughly enjoyed Batman v Superman: Dawn of Justice. One of the major reasons for that reaction was the finale and the thrilling action sequence that featured Gal Gadot as Wonder Woman. Here was a modern, memorable Wonder Woman who oozed power and skill even though she still wore a skimpy outfit. (What did Jessica Rabbit say? “I’m just drawn that way.”) I was excited that DC decided to give Wonder Woman her own stand-alone movie. There’s a lot that’s good in this epic origin film, but lack of focus and bad choices ruin those good elements. Unfortunately, after watching Wonder Woman, the only thing that I’m wondering is what went wrong.

It’s clear that DC wants to build a cinematic empire like Marvel, and the new multiple-character DC logo reflects those ambitions as it mirrors Marvel’s logo. For many reasons, I don’t think that DC will ever match the magic and coherency of the Marvel Universe. Uniformity is one of those reasons. Zack Snyder directed Batman v Superman: Dawn of Justice and will also helm Justice League. In both cases, Wonder Woman is in good hands, and the Justice League trailer attached to this film reaffirms my initial feelings about the character after her introduction. The producers hired director Patty Jenkins (Monster) and TV series writer Allan Heinberg, and I’m sure that they picked Jenkins so that a female director would deliver to the masses the most iconic female superhero. Although that might make great marketing, that’s actually backward thinking. Jenkins and Heinberg are simply not right for this project because of their inexperience with the genre, and that kind of source material familiarity marks the difference between success and failure.

Wonder Woman embodies a typical superhero origin story. Diana (Gadot) lives on a hidden island of Amazons who fight and train endlessly. When Steve Trevor (Chris Pine) crashes his airplane near the island, he also brings the outside world into the ladies’ paradise. Diana learns of World War I and thinks that she can help Trevor to stop the war by defeating the god Ares who must be its cause. The film mostly dragged for me until Trevor assembles a team and goes on a mission… over an hour into the running time. Obvious cuts needed to be made. For example, elaborate animated sequences accompany a discussion of the gods that could have been easily accomplished with a few lines of dialogue. Just because producers offer lots of money doesn’t mean that you need to waste it on expensive animation that adds plodding, unnecessary minutes to an already long movie. Pirates of the Caribbean: Dead Men Tell No Tales nearly matches Wonder Woman’s length yet engaged me for almost every minute.

The cast shines despite the missteps. Gadot perfectly embodies the image and personality of a modern Wonder Woman. As with Angelina Jolie in the Tomb Raider movies, the filmmakers found the right actress for the role but didn’t know what to do with her. Pine always steps into the hero role nicely and matches Gadot’s energy. I’m cursed by seeing too many movies, so when Pine announces that he’s “Captain…” in one unfortunate line of dialogue, I immediately thought “Kirk.” Danny Huston and David Thewlis lend gravitas to the cast, and the memorable Saïd Taghmaoui always enhances any production. The casting of Connie Nielsen and Robin Wright as Amazon sisters reveals one of the nagging issues with the hidden island — the women know hundreds of languages yet speak English with various accents.

The biggest problems for me with Wonder Woman involve the titular character’s powers and their representation. We all remember her shield, truth-inducing lasso and bullet-repulsing bracelets. Fortunately, Jenkins doesn’t mess with these expected inclusions. Instead, she imbues Wonder Woman with the abilities to practically fly in some scenes and smash things like she’s three times her size. When did Wonder Woman become the Hulk?! Wonder Woman’s unique abilities as a warrior stand out from other comic book heroes, so adding special-effects enhancements just because there’s a budget for them diminishes her power. Jenkins lazily employs slow-motion photography multiple times to supposedly heighten the action. (Only Baywatch should feature any slow motion this summer.) Unexpected magical powers of other characters further ruin the illusion.

The roller coaster of my reactions moved up and down from the opening minutes. The wonderful framing sequence engaged me and nicely sets up the origin story in the middle. Music enhances any cinematic experience, so the flourish of electric guitar notes that accompany Wonder Woman going into badass mode work perfectly to raise the blood pressure. Wonder Woman may just naturally fit in Snyder’s movies, and I’m excited once again to see her as part of a team in Justice League. Although I can rave about many elements that I liked, I’m sorry, Jenkins, but this was a blunder, woman. 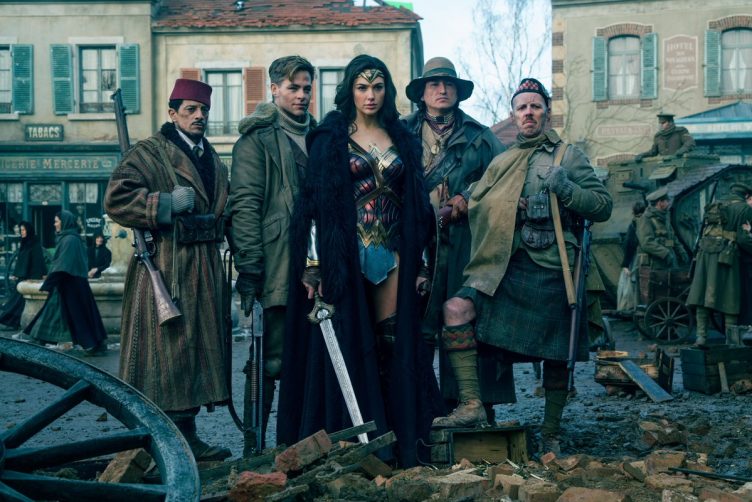