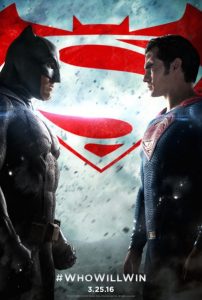 There has been a steady supply of Marvel superhero films for a number of years now. With a detailed overall game plan and release schedule, Marvel fans get their fix every few months under the umbrella of Disney and all of the marketing power that company brings to bear. DC properties were not nearly as organized or planned. Christopher Nolan’s Batman films were the highlight, and Man of Steel was a disappointment. Despite its unnecessarily wordy title, Batman v Superman: Dawn of Justice raises the bar for DC and begins a wave of titles that will rival Marvel in range and familiar superheroes. I entered this film a little bit afraid that director Zack Snyder would deliver a lackluster Batman film just like he did for Superman with Man of Steel. Instead, I was blown away by the immense scope and a believable kick-started Batman with Ben Affleck donning the suit. There are a few missteps here and there that are balanced by one of the most fantastic finales in superhero flicks. Batman v Superman: Dawn of Justice is both the beginning of a new era for DC characters and a perfect example of how to bring a comic book to life and keep you on the edge of your seat.

Snyder and cowriters Chris Terrio (Argo) and David S. Goyer (Man of Steel and the Blade trilogy, among many others) have a lot of ground to cover here. The movie feels like setup for future projects as well as introduction of new versions of characters and slow plot development that builds up to the titular conflict. Man of Steel did something right in that there is little that needs to be explained now about Superman/Clark Kent (Henry Cavill). It’s like we’ve jumped into a later issue of his comic book series, and Lois Lane (Amy Adams) is much more involved this time around. The origin scenes all go to Batman/Bruce Wayne (Affleck) as we see the impetus for his life as a crime fighter (his parents’ murder) before we jump to a point where he and his butler Alfred (Jeremy Irons as a gritty version of the familiar character) have developed his weapons, vehicles, technology and suits. Bruce sees Superman as a threat to mankind, so when Lex Luthor (Jesse Eisenberg) pits Batman against Superman for his own agenda, Bruce is only too glad to oblige. Throw in Holly Hunter as a senator in a subplot of citizens turning against Superman, and there’s a lot to follow as the story bounces between Metropolis, Gotham and other places. Based on the advertising and trailers, it’s no secret that Gal Gadot portrays Wonder Woman/Diana Prince. She doesn’t have a large role in this film, but her presence speaks volumes about the future DC projects.

Cavill may have been at a disadvantage as the new Superman in Man of Steel, but he’s the familiar face here and feels more like a complete character. I was prepared to not like Affleck as Batman just because it’s an iconic role for such a well-known actor to inhabit. Moviegoers bring their prejudices to that kind of casting, and the trailers didn’t do much to help the matter with Affleck’s affected deep Batman voice. Fortunately, Affleck molds his own version of Batman somewhere between the young billionaire-about-town of George Clooney and the damaged goods of Christian Bale. I expect Affleck to wear the cowl as long as this series of DC films involves Batman. Gadot doesn’t get enough screen time, so it’s impressive that she has the impact that she does. She easily got the biggest round of applause from my screening’s audience. My biggest problem is with Eisenberg. I like him in almost all of his roles. He’s passable here; I just don’t think that he’s a good match for Luthor. Eisenberg is so bouncy and energetic that he would be a much better fit for The Riddler or The Joker.

Fans of Batman will find a lot to love. Of course, all of the Batman paraphernalia has to be redesigned for each movie just as Tim Burton put his stamp on the iconic Batmobile. Batman has a variety of suits here, depending on his mission at the time. Some are sleeker or more aerodynamic for easier movement and fighting. The costume for taking on Superman is bulkier, and that hugeness translates to the new Batman logo as well. The new Batmobile is an indestructible, tank-like thing of beauty. Shaped almost like a dune buggy and reminiscent of past Batmobiles, the scenes with this vehicle take on a James Bond quality as the car does things that no machine should be able to do. Despite this affront to physics, it makes the sequence fun.

The titular feud is largely a silly premise and should not have been the focus of this film. The second half of the title would have been perfect on its own. It leads to a major fight sequence that is compelling to watch. There just didn’t need to be all of the rivalry in the marketing about who’s going to win, etc. Under the right circumstances, either character could beat the other, so why bother to position them this way when moviegoers know that they’re coming back to work together in future Justice League movies? Even worse, Luthor and other characters have dialogue that jokingly refers to the battle between Batman and Superman, and those unnecessarily self-referential lines almost took me out of the experience.

There are plenty of nice touches here that show Snyder’s development as a director in the DC universe. Whether it’s Batman standing on a crane or Superman descending godlike with a hurt citizen in his arms, so many of the poses and images recall iconic comic book covers or splash pages. Complex montages of Superman saving the day could have been much simpler. Snyder goes for broke with the scope of these scenes, so you find Superman tugging an ocean liner instead of a yacht. Costuming is important for Snyder’s heroes, and Prince sports gold bands and accessories that hint of her Wonder Woman accoutrements. I love all of the hints at other stories and characters; many of these are surprises, so you should discover them as I did while watching the movie. One dream sequence left me scratching my head and may have gone too far in terms of trying to be creative. I forgive this mistake and some of the others because the brilliant finale left me breathless. The last half-hour of the movie will stand the test of time as one of the best action sequences in cinematic history, and I don’t say that lightly.

All aspects of this film work in harmony to bring off its success. Hans Zimmer’s masterful score surprises with its punctuation of the action almost as if it’s joining in on the fray. Some of the themes from Man of Steel are welcome here to underline Superman’s presence. I balked at the 2 ½-hour running time because it seemed way too long to both reboot Batman and pit him against Superman. In retrospect, it flew by, and I could have stayed in the theater longer if there were more. I have kept a lot of comments to myself because there are major surprises and plot twists to uncover. Batman v Superman: Dawn of Justice effectively begins a new day for DC movies, and I’m ready for an equally healthy rivalry between Marvel and DC in theaters just as in the comic book stores. 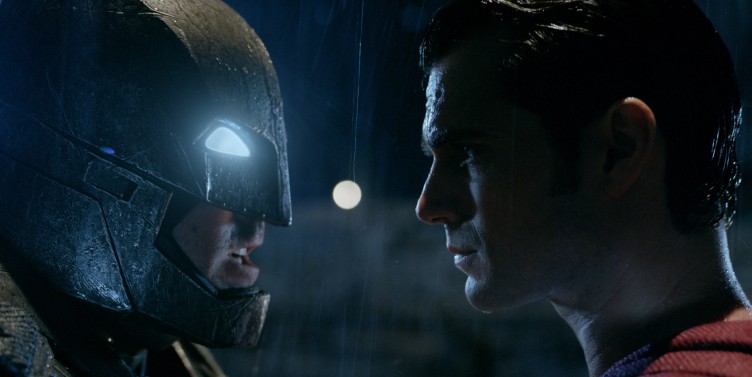