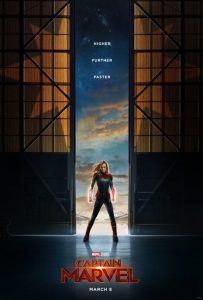 Marvel Studios has been riding a wave of success for some years. Not all of the superhero films enjoyed the same take at the box office, but 2018 included the popular Avengers: Infinity War and the award-winning Spider-Man: Into the Spider-Verse. DC introduced Wonder Woman into its own movie canon to both great critical and fan response. Perhaps Marvel decided that it was time to bring forth a new female superhero who is supposed to be the most powerful entity in the Marvel universe. Unfortunately, this new person fell into the wrong hands for such an experiment. Just like an otherworldly being who would crash into a video store, Captain Marvel wanders aimlessly and has no idea where to go next to complete its mission.

The film begins with a jumble of images and sounds that are just as confusing for the audience as they are for Vers (Brie Larson), a member of the Kree group Starforce, who experiences such flashbacks regularly and doesn’t know what they mean. Led by her mentor Yon-Rogg (Jude Law), the Starforce seeks out the enemy shapeshifting Skrull species. Caught up in this war, Vers thinks that there must be something more to her life and intends to investigate her past. When she connects to the Kree leader known as the Supreme Intelligence, she sees it represented as Annette Bening. Answers start to come more frequently when she crash-lands on Earth in Los Angeles, and it’s established early on that it’s 1995. Before long, she meets up with younger S.H.I.E.L.D. agent Nick Fury (Samuel L. Jackson), and he accompanies her on a quest to dredge up her past where she meets a Skrull named Talos (Ben Mendelsohn) who has information that she wants. In the right hands, this meager plot could work somehow. Writers/directors Anna Boden and Ryan Fleck have some TV series and a few smaller films in their past like It’s Kind of a Funny Story, so they and a few more writers just don’t have the résumés as I see it to take on such a major movie. The result doesn’t feel cohesive and at times bored me with its awful pacing and storytelling.

Fortunately, the casting doesn’t disappoint. Larson fully commits to Captain Marvel — the eventual identity of Vers if you haven’t figured that out yet — and will serve as a great image for females as universal as Wonder Woman. (Her name would also make a great Before and After puzzle for Wheel of Fortune with ALISON BRIE LARSON.) She displays both strength as a fighter and vulnerability as a lost soul looking for her origin story. I wish that the filmmakers had given her better material. Jackson has played Fury often in other Marvel franchises, so it’s refreshing to see him here without the eye patch and black leather outfit before he assembles the Avengers. Both Law and Bening seem out of place. It’s almost as if they wanted to appear in a Marvel movie to satisfy some whim or impress family members. Mendelsohn has more of an impact under heavy makeup than either Law or Bening. It would have been better to elevate Djimon Hounsou to Kree leader; there’s not a time on screen since his breakout role in Amistad where Hounsou hasn’t commanded your attention. Lashana Lynch brings emotion and humanity to Maria Rambeau, another link to Vers’s true identity as Carol Danvers.

Captain Marvel is awash in special effects, as you would expect for any Marvel film. Vers’s uniform has a screen embedded in her forearm with all sorts of powers, including the ability to change the colors of her uniform. Later on, I couldn’t tell where Larson ended and the digital effects began. Explosions and spaceships galore fill the palette for the filmmakers, and Larson gets her fight on in a number of combat sequences. Perhaps my favorite effects are the shapeshifting abilities of the Skrull. These scenes at least lend some mystery to the plot because you never know whether a character is a Skrull in disguise or not. They used some digital trickery to de-age Jackson as they did with Kurt Russell in Guardians of the Galaxy Vol. 2. It doesn’t look as creepy or artificial for Jackson, though. The Kree capital of Hala has that Blade Runner look, but for all of the effort to construct those images, you don’t get more than a few flashes of the city.

The filmmakers threw in all kinds of pop culture references to establish the time period. I didn’t check all of them for historical accuracy, but after I performed a few searches, it looks like they had someone do that before they included posters of bands and movies. Vers crashes into a Blockbuster store in Los Angeles, and that still leaves the last store on the planet intact in Bend, Oregon. Unlike the Guardians of the Galaxy franchise, the hit songs feel tacked on instead of weaved into the narrative. When Vers fights to the sounds of No Doubt’s “Just a Girl,” I wished instead that she punched the filmmakers for that dumb reference. A legendary video game and a tongue-in-cheek appearance by a Space Invaders pinball are fun to see; just don’t expect there to be a logical reason for their presence like most of the references. They’re simply set decoration for a period piece.

Although this might be my least favorite Marvel film, the titles will certainly receive the only spontaneous applause. Let’s be honest. The highlights of Captain Marvel involve all of the connections to the other Marvel movies, especially Avengers: Infinity War. You could probably have shortened this entire film and made it a 15-minute prologue to Avengers: Endgame. To add to the confusion, Shazam! (DC’s Captain Marvel) comes out in less than a month, and Hounsou also plays a role in that superhero’s story. Supergirl’s human family has the surname Danvers on her eponymous show. Marvel fans will flock to the theaters no matter what anyone thinks. That kind of loyalty should be rewarded, and Captain Marvel disappoints to the level where a cat named Goose may just have the most exciting and humorous scenes. 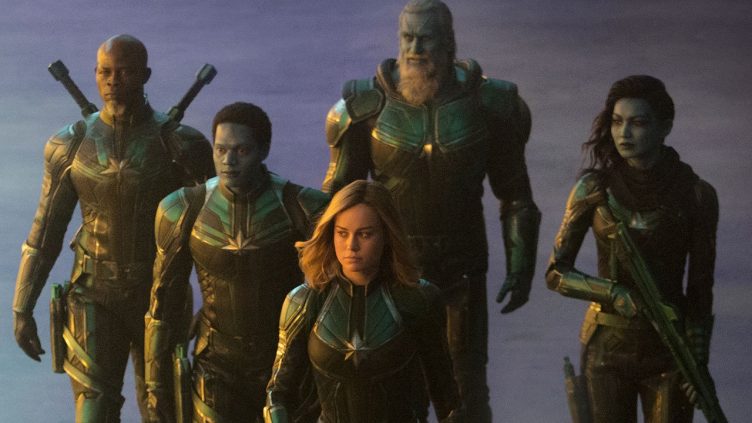