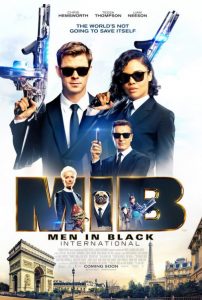 Successful franchises offer new characters and expand the universe of the films beyond the familiar elements of the series. Think of how the Toy Story movies have grown over the current four entries. It’s no mistake that the first image that you see in Men in Black: International is the titular lady in the Columbia Pictures logo putting on those special Men in Black shades and flashing a neuralyzer to make you forget the previous films. Unfortunately, it didn’t work. The camaraderie between Will Smith and Tommy Lee Jones and the fun mixed with the wacky sci-fi action defined the series, and most of that is missing here. Sadly, Men in Black: International comes off as lifeless and perfunctory despite two strong casting choices and a taste of the franchise’s comedy.

The new blood in the cast extends to the other side of the camera with director F. Gary Gray (Straight Outta Compton and The Fate of the Furious) and writing team Matt Holloway and Art Marcum (Iron Man, Punisher: War Zone and Transformers: The Last Knight). Their efforts aren’t enough to jump-start the series even though I would love to see it continue. After a transformative childhood event, Molly (Tessa Thompson) spends her time looking for the titular agents in her native New York City. After she sneaks her way into the city headquarters, she convinces a skeptical Agent O (Emma Thompson) to give her a shot. Whisked off to London, Molly is known as Agent M and must assist Agent H (Chris Hemsworth) in finding a mole in the London office run by Agent High T (Liam Neeson). Although we see Agent M’s progression over the course of the film, the ho-hum plot doesn’t offer as much fun as what could have been with international locations and those new cast members.

Tessa Thompson’s star continues to rise with roles in both major films like this one and Avengers: Endgame and others like last year’s Sorry to Bother You. She has an impressive résumé in both film and television, and the idea behind her fangirl character becoming an agent should have been the right framework on which to hang a great plot. Hemsworth sleepwalks through this performance, and the relationship between Agent H and Agent M doesn’t come close to that of Agent J (Smith) and Agent K (Jones). The film dangles Emma Thompson and Neeson in front of us and doesn’t give us nearly enough of either of them. Emma Thompson had more screen time in Men in Black 3, so her sarcastic, no-nonsense leader definitely needed some more scenes with the leads. Rebecca Ferguson with striped hair merely appears in one long sequence, and Rafe Spall’s Agent C is so caustic that you want to forget him. Everybody leaving the screening couldn’t stop talking about Kumail Nanjiani’s voice work for the tiny character known as Pawny who steals the show. Instantly recognizable from his first lines, Nanjiani surprised me here because I didn’t expect to see him this summer until Stuber’s release. The scenes, dialogue and background for Pawny’s life would have made a better plot than the tired mole approach and would have celebrated the Men in Black spirit because Nanjiani makes you laugh every time that Pawny appears.

As you would expect, the filmmakers didn’t skimp on special effects. Models and puppets usually provide a more realistic feel for aliens in scenes with human actors, so the large numbers of digital aliens appear too clean in the scenery. Wacky monsters form the basis for the Men in Black stories, and with most of that effort spent on Pawny, only a few glimpses of the past (the pug dog and the tiny troublemaking aliens) exist. Instead, the effects folks go large with scenes at the Eiffel Tower and a pair of evil aliens (portrayed by twins Laurent Bourgeois and Larry Bourgeois) who appear in a cloud of smoke with burning eyes when not in disguise as humans. Thus, Men in Black: International meets its quota of effects and aliens, but there’s a saying about slathering lipstick on a pig alien that comes to mind.

The title would have you believe that this is a world-spanning movie, and there are enough scenes in Marrakesh and its nearby desert to pull the series out of America into other settings. Merely placing the characters in international locations doesn’t cut it as much as involving them in the local culture and characters as, say, the Indiana Jones movies do. The scenes in London and Naples could have easily taken place anywhere. With that element shot, what’s left doesn’t offer enough to fill out a black suit. A pair of globetrotting agents with Pawny in tow in a more inventive plot would have pleased even the most jaded moviegoer. You’ll have some fun for nearly two hours in this expanded world and then forget about it shortly thereafter.

With Smith and Jones left behind, Hemsworth and Thompson could easily continue these films. The next logical step would be to take these characters beyond Earth and onto other planets in the universe. Will it happen? Who knows. For now, Men in Black: International offers a brief diversion between other summer blockbusters, and there are worse ways to spend a trip to the theater. 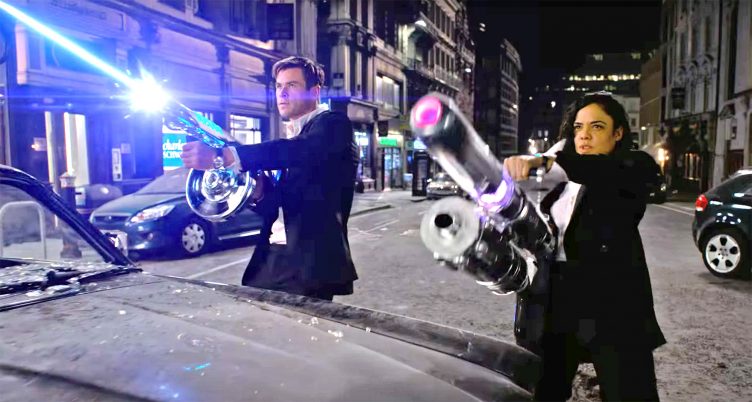