Okay, so it’s not the biggest news out there but it was still quite a surprise to me—and a welcome one. Not long ago I wrote up a post about the wonders of MiO Liquid Water Enhancer. Since finding it early last summer I’ve become not only a big fan but also addicted to the point of trying to add as many converts as possible to it (with some nice successes).

In the intervening months I’ve been curious as to how the product is faring in the marketplace and if we were going to see some new flavors added to the roster of the existing initial six. Well, word is that MiO is doing incredibly well for Kraft Foods bringing in $100 million in revenue in its first year. I also notice that it’s slowly stealing more shelf space from Crystal Light (although that’s not really a competing brand as it too is owned by Kraft).

Since my initial use I’ve found that I prefer bouncing from one flavor to another fairly equally (the least favorite so far has been Sweet Tea which isn’t a big surprise as I don’t like any “sweet” iced teas out there to begin with). 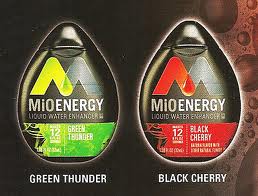 What I didn’t quite expect was what’s apparently coming next. While making a quick stop for milk at a local grocery store I passed by an end cap that sported three new entries into the MiO family. I first noticed a standard looking package with a new Orange Tangerine flavor. Then next to it were a couple clearly different variants called MiO Energy. These come in black containers (in contrast to their traditional silver packaging). On closer inspection all three variations brought something novel to the party besides their taste.

The orange entry is boosted with B3, B6 and B12 vitamins. The Energy variants came in two flavors—Black Cherry and Green Thunder (which is apple-like). Both of these are clearly designed to try to elbow their way into the territory previously opened up by the various 5-hour energy drink-type products that can now be found at the registers of virtually every convenience store in the country. They do this by infusing these products with 60 milligrams of caffeine per serving (8 ounces). To put that into perspective, a Red Bull (8.3 ounces) has 77 milligrams while a can of Coca Cola (12 ounces) has 34 milligrams.

I immediately tried the Black Cherry Energy flavor and it was fantastic. I’ve never cared one bit for Red Bull and I’ve missed the energy boost I got from iced tea. In a bid to drop weight I’d given up drinking my beloved Arizona iced tea (which I was buying by the case). 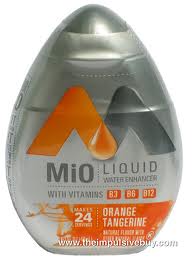 The orange flavor was also interesting. Upon filling my glass I immediately thought of the old favorite Tang which was hugely popular when I was a kid. It gained fame as the drink astronauts drank in space. Both the smell and the taste only validated my guess as it seems like virtually the same thing but not quite as potent (probably not a bad thing). The amount of each vitamin boost only amounts to 10% of your recommended daily intake and while that may seem small to some the point is that you should be drinking several glasses of water a day. Plus, I wasn’t getting any extra amounts of this before so it’s all a plus.

There are only two negatives. First, now the main six flavors seem barren by comparison. I’d like to see vitamins added to each of the other flavors to give them the added benefit to my health and the caffeine kick is nice but if I want that I’m limited to just two flavors for now. I almost wish they had a flavorless caffeine bottle that I could just add with any other flavor but, of course, that’s not all that convenient.

Second, I’m a bit concerned that these may all be test products. Why? None of them are mentioned on the website other than in their Tweets section. In fact, their own FAQ includes a statement about how none of their products contains caffeine. Very odd. Either these are test products or their marketing department has dropped the ball.

Regardless, for those of us who are now addicted, we’ve got a new problem to contend with—which of the nine products do we choose each time we fill a glass of water?