There’s been much made over the issue of the emergence of what’s being called “cloud computing”. Essentially the concept is a bit hazy on the definition with much of it focusing on two key elements: The data involved being stored remotely on a service’s servers and the concept of browser-based server-side applications instead of client-side (or local) programs that you install manually.

I’m entirely on board with the concept of cloud computing while others around me have been confused, hesitant or downright hostile towards the idea. I understand from my own history that this next evolutionary step will not  go entirely smoothly and will include lessons that need to be learned the hard way. Ultimately I believe, in the end, it’ll all work out and we’ll be much better for it.

I’ve already seen the benefits of cloud computing in a number of areas:

1. E-mail was made for this. Instead of installing a local app and keeping all your messages on your PC and then, as is often the case, losing them when your PC fails in some way. This happens usually because you didn’t remember to backup or didn’t know how to backup (and for this I blame Microsoft as Apple systems have far less issues with the latter issue). Gmail, while far from perfect, has really made a major impact on my daily computing life. I never need to worry about access to important messages no matter where I am. In the case of Gmail specially they even have an offline version to complement the browser-based app. As a long-time mail client user I was skeptical that this approach could work for me but now there’s no going back. 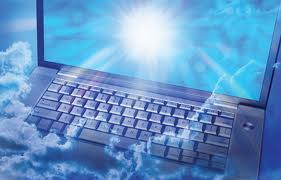 The only part I’d like to gain control of is the server itself. I would love to have all the benefits of Gmail while having all of my e-mail stored on my own hosted server. Blogger, for example (also a Google company) allows for this sort of option.

2. Speaking of Blogger it’s how I came to blogging and a nice little application that I never have to worry about. It’s always there and there’s nothing goofy to install. Just go to the site and start typing. Plus there are no updates to worry about. It’s all always current. In the old style I’d need to download an app, hope it works with my system, keep it updated, store all my own posts and worry about them, etc. Never an issue.

3. I use Carbonite for my backup solution of choice and it’s really a nice feeling to see all my critical files, photos and songs always being backed up outside the house. A neighbor not long ago lost everything they owned in a flood that collapsed the house and destroyed it all. Here, while that would be catastrophic, at least I could get some solace from knowing my digital world is safe and sound. One oddity is that if the cloud fully takes off Carbonite could be out of a job as there wouldn’t be anything local for them to backup.

4. My music has been “clouded” for some time now. First I used a product that just failed called JukeFly. It took all my music from my local drive and made it accessible from anywhere including all the links to videos about the song, lyrics and more. Sadly they never found adequate funding to continue. I’ve also used solutions like Pandora, MOG, Spotify, Last.FM and others. Music seems made for the cloud. These days I have my music running on Google Music which stored all 150 gigabytes of my collection on their servers and gives me access to them from anywhere. It’s Google so you know they’re going to put a lot of effort into this tool and it’s only in its earliest stages now.

5. The biggest example is when it’s time to resort to a full system restore. Maybe you’ve had a hard drive fail, or bought a new computer or the OS simply is no longer working as it should. Before it could literally take me a week of solid effort to get everything back to the way it was (always losing something along the way—some tool or neat app usually). With the cloud things are so much simpler. I re-install the OS and everything cloud-based is right there waiting for me. All my music, all my docs, all my critical files, all my favorite apps, etc. As soon as the operating system is up I’m productive again. That’s a huge benefit.

So enough with the examples. There are literally countless examples on both sides of the argument. What really struck me about the concept of part of the cloud was the idea of the browser being the instrument by which we access all our applications. Many people I speak with are extremely uncomfortable with this development. The main reason is that they view the browser as a very limited tool and one that would add an unnecessary layer between the application and the operating system. People worry that anything run via the browser would be slow compared to anything run, shall we say, natively.

To be frank, that’s a really short-sighted view. I’ve been around just long enough to actually have some useful perspective on this. First of all, if you go back to the dawn of the PC early coders were aghast as the concept of the operating system. They viewed it as an unnecessary layer between their applications and a direct connection with the hardware. The funny part about that is that the operating system was created to allow for more people to benefit from the computer and these early coders viewed all such users as non-techies. By today’s standards the non-techies of those days would be today’s network admins and such. It’s all relative.

The first really big layer we had was DOS—the first truly ubiquitous operating system. Back then we all got comfortable with it and then along came this thing called Windows. What many of you may not know is that Windows originally wasn’t an operating system but was actually an application that ran on DOS. After it started gaining real traction talk began of people running all sorts of applications on it and the one area that seemed entirely ridiculous was the idea of Windows running games. Everyone worried that any application that really needed the resources would simply run like crap under Windows. Initially that was quite true. Then Microsoft responded to the criticism with a product called WinG and suddenly things started to change. We figured out that you could play top-flight games under Windows and then the coders—now refocused—set about finding ways to write programs optimally for this new setup. Ultimately Windows became the operating system and that removed the extra layer.

The browser, by comparison, strikes me very much as the same type of animal as Windows was so many years ago. It’s just another layer currently sitting on top of Windows or the Mac OS or any flavor of Linux or your phone, etc. We run all sorts of applications in it today but these are all in the earliest stages of evolution. Think about what a browser experience was like in 1996 versus today. We’ve come a long way. The only difference is that Microsoft has done a great job of getting everyone to think of the browser as nothing more than a dumb tool.

Companies like Google are now out to change that perspective. Chrome, Google’s browser, isn’t just a browser but is also now a full-fledged operating system and it’s gaming steam every day and they’re not the only ones working to make this shift. The one thing we can rely on is that the computing experience of the upcoming years is very likely to be dramatically different than what we’re used to today—just as it’s always been. So yes, it’s true that if you have a power outage you’ll lose access to your data and apps that are on the cloud. It’s also true that without power you’ve likely got better things to be worrying about than playing a song or sending someone an e-mail. Even with that, many today have cell service on their tablets, so even that’s not a restriction. The weather is changing here and with it comes some clouds. The difference is these aren’t dark ominous clouds but the puffy wondrous clouds that fire off the imagination and set us all to daydreaming about our future and all the new possibilities.