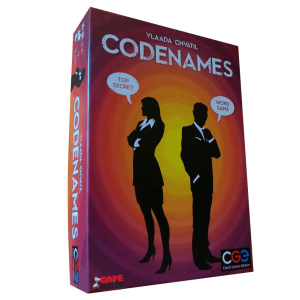 Two teams of spies square off in a race to contact their own network of deep-cover agents in Codenames.

Okay, let’s be clear about something. That’s the thematic backstory from the publisher. The actual game play of Codenames has as much to do with covert operatives as I have with traveling to other dimensions. None of that matters one bit with regard to the potential entertainment value of most games, and this is no exception. This quick, accessible brainteaser provides intellectual and competitive stimulation time after time for novices and experienced gamers alike.

Codenames is a deductive reasoning game involving word relationships. The game claims to support up to eight players, but frankly, it could handle almost any number, and players can even join in during the middle of the game. Just break your group up into two teams — a red team and a blue team. Each team picks one of their own members to act as the clue giver for that round. The two clue givers sit on one side of the table while everyone else sits on the other side. Shuffle a deck of 200 double-sided “codename” cards, and lay out 25 of them (either side face up) in a 5×5 grid on the table for everyone to see.

Each card contains a single noun; examples range from words like Astronaut to Zaire. There’s also a “secret key” card deck. One of these is chosen and handed to the clue givers. These cards assign a hidden team color to every card on the table, including blue team agents, red team agents, several innocent bystanders and one assassin. The key card indicates the starting team and mitigates its slight advantage by assigning it an extra card to identify. 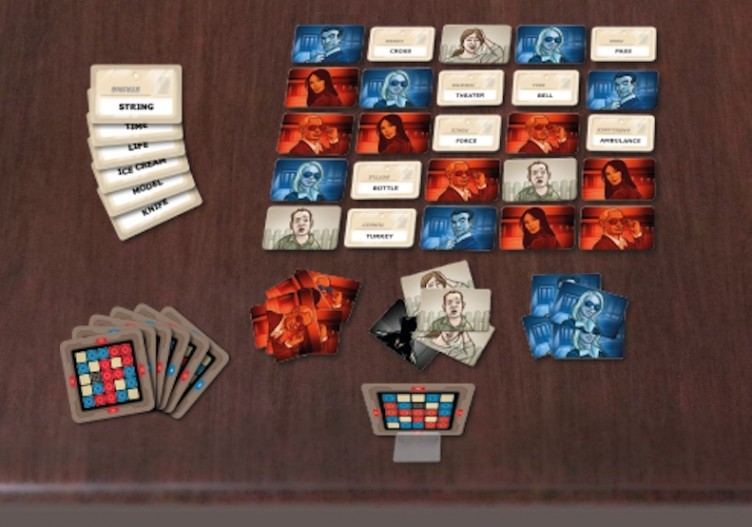 The goal of the game is to be the first team to guess all of the correct words of their color before the other team can do the same. The clue givers look over all 25 words on the table and then consider their own eight or nine words. A clue giver’s job is to get their team to guess as many of their own words as possible without making a mistake. They give their teammates a simple clue, consisting of a single word (that can’t be one already showing) and a number. Let’s say the red team’s clue giver says “food” and “four”; that means that there are four cards designated as red that are related to “food.”

The clue giver’s teammates can then discuss the clue and carefully select one card at a time. If they guess successfully, the card is overlaid with an agent card of that team’s color, and they may continue guessing. If they select a word that’s associated with an innocent bystander, the turn passes immediately to the other team after the card is covered by a beige bystander card to be taken out of play. Even more disastrously, choosing the assassin card causes the team to immediately forfeit the game. Consequently, some teams may choose to voluntarily end their turn before using up all of their potential guesses in order to avoid catastrophe.

In each turn, the guessing team members have the option of guessing one additional card beyond the clue number given to them. This comes in quite handy at times. Perhaps in the first round, when the clue giver said “food” and “four,” the team only felt confident in guessing three of the cards. In a later round, they may then use that extra guess to go after a card from a previous turn. Play continues until one team either selects an assassin card or correctly identifies all of the words associated with their color.

The game takes anywhere from 15 to 30 minutes to complete, allowing for several plays a sitting.

The real draw of the game is the logic puzzle created by the similarities of the 25 cards that end up hitting the table. Of course, those relationships have no connection to the colors associated with them by the key card for that round. For example, say there’s an “Art” card, a “Chef” card and a “Wine” card. A tempting clue might be “French, three.” That’s simple enough, but what do you do if “Chef” and “Wine” are your color and “Art” is an innocent bystander card? Saying “French, two” risks your team picking “Art” and thus ending the turn. It’s even worse if “Art” turns out to be assigned to the other team’s color. Your team just made their job that much easier, and now, it’s their turn. If “Art” is the assassin, it’s game over. The possibilities are endless, thought-provoking and often hilarious.

Codenames is a simple game to pick up, has exceptional replay value and can be enjoyed by young and old alike. The nearly countless card combinations provide a satisfying and often intriguing experience, even when you find yourself on the losing team. Fans of wordplay games will enjoy it most of all. It plays best with four to six players, includes quality components and can be bought for half the price of most games. The only downside is that it has a tendency to wear out players after only a few rounds. At least they’re short. My clue is “Fun one.”