Sentinels of the Multiverse is a cooperative deck-building game by Greater Than Games, based in the fictional Sentinel Comics universe. The goal is simple: two to five players —taking the guise of a chosen superhero —must work together to defeat a common enemy, while both heroes and villain deal with environmental bonuses and hazards. SotM is a solid example of a simple, familiar premise matched with equally simple (and immensely enjoyable) execution.

The Sentinel Comics universe will certainly provide comic book fans with a comfortable array of set pieces. The vast majority of heroes, environments and villains are based on very familiar archetypes: you’ll find your Superman clone, your “Batman” (in this universe, a gadget-wielding female hero named “The Wraith”), your Darkseid-type alien overlord, etc.

Note: Please don’t read this as a shot against the game —SotM is a well-executed love letter to classic comic books. The cold hard truth is that DC and Marvel would never license their IP to a small indie game developer, and the team at Greater Than Games did a bang-up job creating the next best thing. 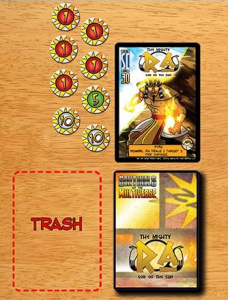 Each player controls one or two Hero Decks (in a two-player game, balance is achieved by having at least one player control two heroes). Players start with four cards in their hand, but this number may be increased with certain card effects. Each player also has a larger Hero Card that describes their Hero’s “Power” (a special ability) and starting hit points. The back side of these cards shows what happens if your Hero is killed in battle — downed heroes provide bonuses and special abilities to their remaining teammates.

In addition to their chosen Heroes, players select one Environment Deck and one Villain Deck, both of which may be controlled by any player (Villain and Environment gameplay has no strategy; whatever’s on top of the deck gets played, one card per turn). The Environment deck typically provides positive and negative status effects during gameplay, which apply to both heroes and villains.

Most importantly, each Villain also has their own larger Character Card, which describes the win/lose criteria for that particular game, as well as any special instructions. Villains typically have two “phases,” with the back of the character card containing the rules and abilities for the second phase.

Villains, Heroes and Environments get a turn each round. Villains and Environments are largely on auto-pilot: a card is drawn of the top of their respective decks, and the instructions on the card are followed. These cards may add ongoing effects, cause “one-shot” direct damage, or introduce new “Targets” to the game, which are similar to ongoing effects, but with hit points (which means you can kill them!).

Hero turns are also really simple. Instead of Target cards, Heroes may have “Equipment” cards, which effectively create ongoing effects. These cards may be limited or unique, allowing only a certain number to be equipped at a time. A Hero Turn consists of playing a card, using a Power (either from a played card or your Hero Card), and drawing a new card from the Hero Deck. Players have the option to draw two cards instead, as long as they choose to skip playing a card and using a Power. Hero Cards may also allow multiple Powers to be used in a turn, or multiple cards to be drawn.

The game ends when either all Heroes have been knocked out, or the Villain is killed!

I’ll be blunt: the art leaves me wanting… more. Ok, maybe not more, but something else. The typography is beautiful, but the character and environment design scream “web comic” and “Saturday morning cartoon” more than “traditional comic book.” Don’t get me wrong, the look is charming, beautifully dynamic and colorful, but the more cartoony style seems out of touch with the classic comic book sensibility portrayed by everything else about the game. When you put this up against other deck games like Dominion or Thunderstone, it just feels a bit unprofessional. If SotM was released with art in a vein similar to Chris Bachalo or Nick Bradshaw —whimsical, but with that Marvel-level of professionalism — I’d gladly drop another 10 or 15 bucks on it.

That subjective nitpick aside, everything else is great. While the initial release was a bit weak in the workmanship department, as of the “Enhanced Edition” the card stock and box are solid, and the 20-page instruction manual is clean and clear.

The Good: Sentinels of the Multiverse is insanely fun, highly replayable, and offers a great cooperative experience. Over multiple games, even a single Hero could be played a number of ways depending on who else is on the team (a good damage soaker this game might be your main source of damage in the next). As of this writing, there are 3 expansions available which add to the replay value by offering additional Heroes, Villains, and Environments.

The Bad: Ongoing effects from Heroes, Villains, and Environments can make calculating damage a bit cumbersome. Also, a number of cards could have been re-worded so their effects were clearer. This is common with deck building games, but it was a bit too common here. Thankfully, the community at the official website is very helpful, and the developers themselves have released some official rulings on common questions.

The Subjective: I would have liked to see a more traditional comic book art style. The game doesn’t have a bad look, but it doesn’t feel like the right look.

Sentinels of the Multiverse: Enhanced Edition sells for about $40 from the manufacturer’s site and is also available on Amazon. Each expansion costs about $20. The game supports two to five players ages 8 and up.