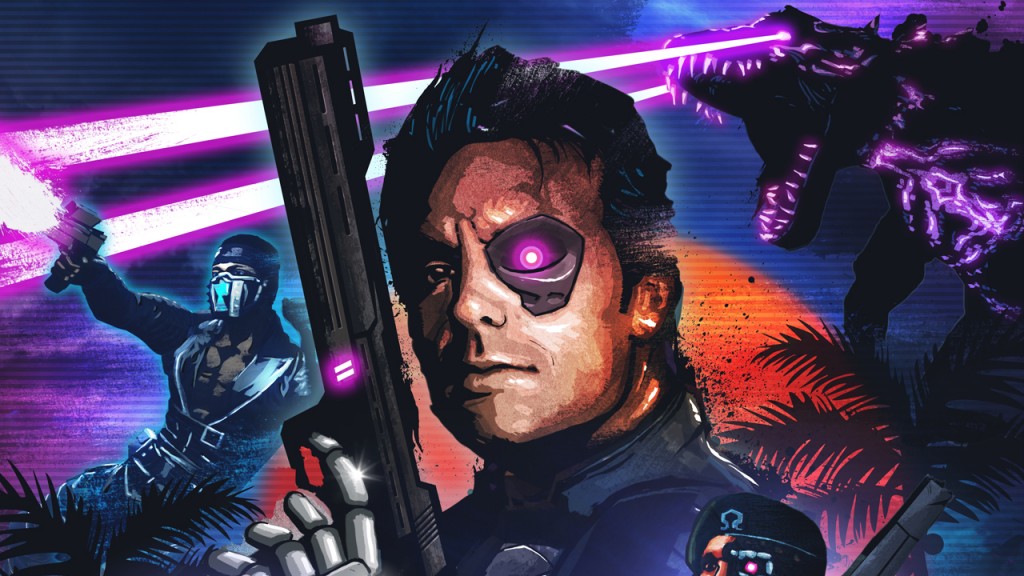 Ever wondered what it’d be like to transport into an ’80s action flick with futuristic weapons and giant, mutation-infused dragons? Far Cry 3: Blood Dragon is that experience and is truly unique among the gaming scene. Rather than release it as an expansion to Far Cry 3, the developers at Ubisoft Montreal fully capitalize on the platform of a stand-alone downloadable title. Far Cry 3: Blood Dragon offers so much charm with the limitless references to games and movies from the ’80s; its hard not to giggle during the 8-bit cinematics or the one-liners that the main character so nonchalantly utters.

The story stars Rex Thundercolt, a half-man, half-robot cyborg who still contains the soul of a human. With the world being taken over by his ex-commander who has his body infused with mutated Komodo dragon’s blood, it’s made very clear early on how ridiculous the story is. The story is told through 8-bit cinematics that feel like they were ripped straight from a classic Nintendo game. This story is accompanied by an outstanding soundtrack that emits pulsating and dark beats as you hunt enemies down throughout the island. It’s apparent how much love the developers had for much of the ’80s culture, and the presentation value is truly a joy to endure.

Just like with Far Cry 3, you are on an isolated island with multiple garrisons and outposts guarded by enemies for you to overtake. However, everything has a neon-lit glow with large amounts of purple, green and red colors. Mercenary forces are replaced by evil robots, and wild animals are replaced by their equally ridiculous counterparts, whether it be metal sharks with laser eyes or chrome-plated tigers. While the initial feeling when playing is much entertainment, it starts to feel like Far Cry 3 with just a futuristic skin and not much else to the package.

Where the game seems to have sort of a problem is its identity in the game play department. It maintains the same mechanics of Far Cry 3 — the stealth kills and liberating of garrisons — but it also enforces a run-and-gun play style. I found myself attempting to sneak around guards but abandoning that quickly because of seemingly odd level design that requires me to just shoot my way through. I would rather it abandon the stealth mechanics and focus more on just being a straight-up shooter, which it does well. 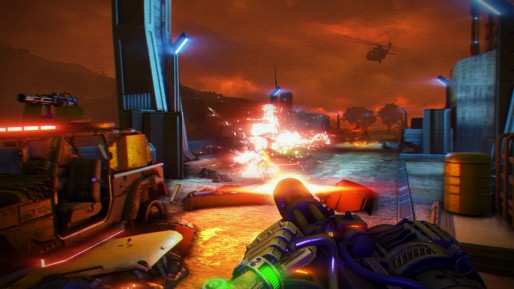 The added mutated Komodo dragons are really the only added game play quirk that spices up the action from its vanilla title. These dragons roam all over the island and will pounce on any living creaturet they find with much ferocity. By sneaking into a garrison unnoticed and disabling their security systems, the dragons can be lured in to help clear out any enemies. This mechanic, just like with much of the game, is hilariously fun at first, but over time, it feels like a gimmick that just makes the game a bit too easy. However, it’s when you fight a dragon head-on that the game offers most of its challenges.

While Far Cry 3: Blood Dragon offers awesome presentation values and entertaining experiences, it feels a bit shallow as an overall product. I completed the laughably short campaign in just over two hours, and the side missions and exploration only add on a couple more. It is hard to shake the feeling that it is just a glorified mod of Far Cry 3, but I don’t think that it takes away too much from the game. Ubisoft Montreal is very aware of the product it’s making, and the game should be taken for what it is — a hilarious, wild romp through an ’80s-style action flick where you star as the hero.