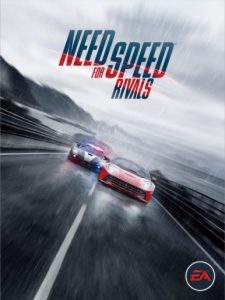 Big blockbuster franchises are a bit of a Catch-22 for game developers. Fans of the franchise want similar game play that they’ve grown to love over the years, but at the same time, they want innovation and new features to reinvigorate that love. Need for Speed: Rivals features a new developer in Ghost, although that studio contains nearly half of the crew of Criterion who made the previous few Need for Speed games. This awkward shift has caused this latest Need for Speed release to devolve in terms of functionality and further alienate what made the franchise so fantastic.

There isn’t much that’s really new in Rivals. The name comes from the constant battle between the risk-taking racers and the justice-bringing cops. The two sides are rivals, and the entirety of the game is based upon this war. Just to nitpick the name alone, it seems odd to picture a racer’s rival as a cop rather than some other racer. Regardless, you’ll be partaking in events to fight your rivals to accumulate speed points and rank up to collect new cars. Putting the story line on the backburner is welcomed as past Need for Speed games have surely shown how awful storytelling is in the franchise. Still, when you’re occasionally forced into story moments, the cinematics and voice-overs are painful to endure.

You can play as either cop or racer; whether you prefer to take down racing criminals or speed past the enforcers is up to you. You can drive around the open world of Redview County, running across events, jumps and whichever shortcuts you may find. The cars handle discouragingly oddly at first, feeling somewhat like tanks, but after some time and unlocking upgraded cars, the driving feels as invigorating as ever in the franchise. Drifting around corners at high speeds is still just as satisfying to execute perfectly. 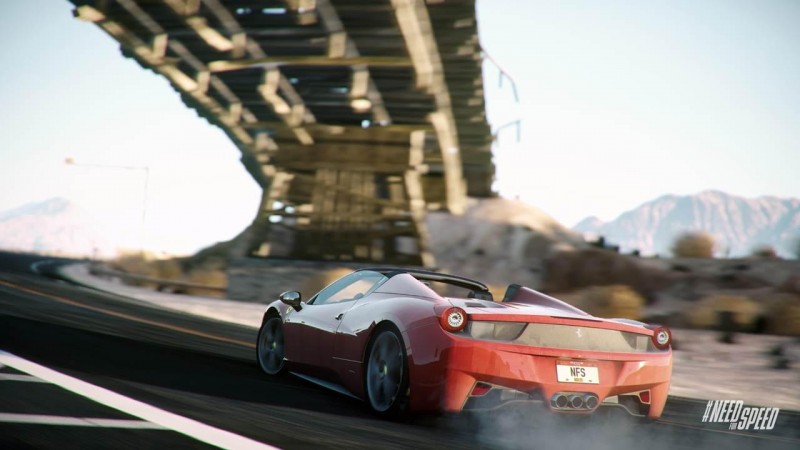 Drifting is simple and satisfying.

There are only four types of events you can tackle, ranging from easy to hard difficulties as you progress. The events consist of time trials, races, hot pursuits and interceptors. Time trials and races are standard fare with hot pursuits and interceptor events involving the police. In hot pursuits, you’ll race other racers but continually have the cops chasing you and attempting to stop the racers. Interceptor events have you running from a single cop to try to escape him as quickly as possible. Before venturing out to try these events, you have to pick a checklist of objectives to complete in order to rank up. These include things like jumping a certain distance or side-slamming numerous cops or racers. While still linear in progression, the illusion of choice is a great addition to mix up your decision making.

Completing events as well as numerous driving techniques earn you speed points to spend on purchasing upgrades and pursuit techs at your hideout. This is the most interesting part of Rivals because racers have to gamble with their speed points. If you wreck your car or get busted by the cops, you lose all the points you racked up as well as your multiplier that you increase the more you play in a run. It’s a constant inner battle of greed and playing it safe, and it is really the best part of Rivals. Oftentimes I would lose a ton of points by playing greedily only to refuel my desire to get back those points. This system is absent for the cop career and, as a result, is less exciting to play.

While the risk and reward system is absent from the cop career, it still offers a much-needed change of pace. Being able to deliver the killing blows and wreck racers often takes a good deal of time, so it brings about much satisfaction to finally destroy the pesky racers. The cop career offers essentially the same types of events as racers but obviously on the other side of the war. Between the two careers, there’s a ton of content here for you to complete. 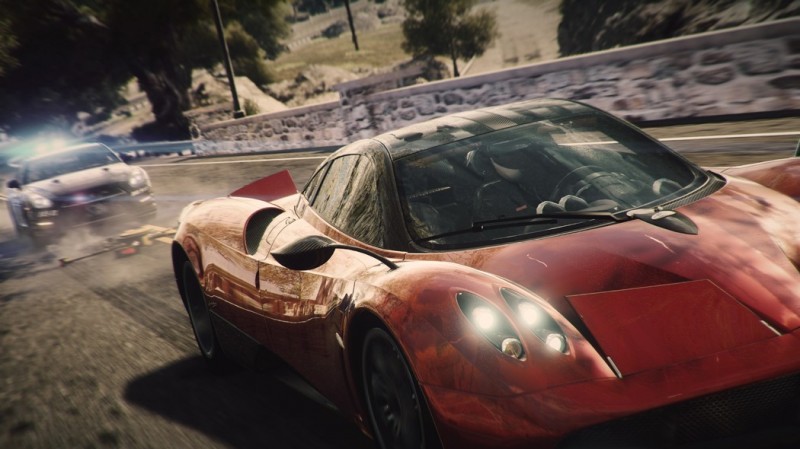 Be prepared to fight your rival in almost every circumstance.

A large part of Rivals is also the online connectivity. Being touted as “always online,” you’ll constantly be thrown into the world with other players either as cops or racers. It’s an interesting idea, but it doesn’t work that well. For starters, you can’t ever pause the game, even in the middle of a race. If the host happens to leave while you’re engaged in something, the game will just dismantle and you’ll be thrown out, only to lose any progress you made. The idea of chasing or racing other players online sounds fun, but the repair shops that heal your car make any progress you have towards wrecking a racer or cop irrelevant. Also, online cop players can be relentless in chasing you until you’re forced to reside in a hideout. Rivals does nothing to help convince me that the future of games revolves around constant online connectivity.

When not dealing with online annoyances, the career events themselves get quite stale after a while. They all take place in the open world by driving up to them and initiating them, but even the ones not deliberately involving cops turn into pursuits. You could be asking for a simple race with the computer to try to test your driving skills, and then a random cop spots you and essentially turns the game into a hot pursuit event. Even time trials where you’re facing off against the clock can have random cops enter and try to stop you. I never stopped hearing sirens, although the sirens were less of an ear sore than the utterly abysmal soundtrack.

What Ghost have done is essentially take the Need for Speed: Hot Pursuit track design and style of game play and fuse it with the open-world, cop-heavy style of Need for Speed: Most Wanted. While each individual game stands well on its own, the developers seemingly grabbed the ideas of both games without really examining why they succeeded in the first place. For example, the open-world cop pursuits don’t work as well on the curvy, linear roads in Rivals compared to the gridlock layout of Most Wanted where you could outsmart cops more easily.

Pursuit techs are back from Hot Pursuit, but they’re more abundant this time. The racers can use an exhilarating turbo booster to speed away from opponents or drop mines behind them to stop upcoming enemies. Meanwhile, the cops can deploy advanced roadblocks and spike strips. Each of these techs can be upgraded three times to reduce the cooldown, increase their efficiency and up the amount of charges for each tech to an absurd six.

The reason these pursuit techs worked so well in Hot Pursuit is that there was a sense of strategy to them. You only had a few of each kind and had to use them sparingly because the cops really put a beat down on you. In Rivals, repair shops are all over Redview County that you can drive through to not only repair your car to healthy status but also restock your pursuit techs as well as fill your nitrous meter. Gone are the tense, nail-biting races from Hot Pursuit where you outsmart and outrace your opponents, carefully picking when to use pursuit techs. Instead, missing an EMP or crashing into a wall means nothing because you can just drive through one of the numerous repair shops.

You would think that, with the large number of pursuits you engage in, they would be well designed. That’s not the case. The police seem to have a bad case of rubber banding. Using a turbo boost will get you far ahead of the cops, only to have them suddenly pull right up behind you somehow. Even more frustrating is that, if you’re pulling ahead and escaping, the pursuit will still be engaged even though there isn’t a single cop on the radar. Also, if you happen to slide behind some nook or side road, the cops somehow know you’re there, discarding any type of stealth or intuition in favor of dumb, blistering speed. The weirdest design decision of them all is that pursuits can be stopped just by visiting a hideout as if the cops suddenly don’t realize you’ve gone into a building. 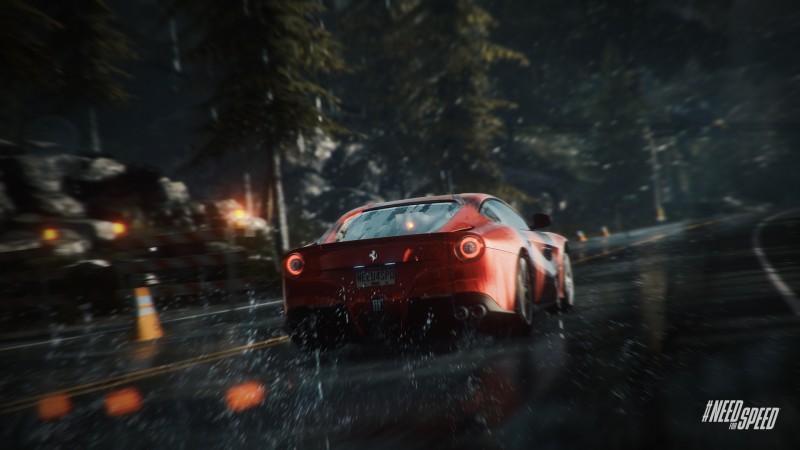 The increase in graphical fidelity is nice when it’s not bug riddled.

The absolute worst part of Rivals is the overall presentation. For some ungodly reason, it’s capped at 30 frames-per-second on the PC, and even then, it runs poorly. Driving around the occasional buildings will bring the game to a crawl, severely hampering your ability to drive. Rivals is no doubt a beautiful game with its weather effects and all, but none of that matters if it’s horribly optimized. Fortunately for console owners, these problems don’t occur. However, the physics are broken in many cases. In previous Need for Speed and Burnout games, the wrecks were almost like destruction porn with the level of detail. In Rivals, cars get thrown around sporadically, and the damage caused to the car is sadly minimal. After a wreck, the game would place me in the most inconvenient manner possible to get back in the race, sometimes even facing me the opposite way. Cars on the road will also randomly appear or disappear. To say Rivals has bug problems would be an understatement.

It’s hard to mention the things that Rivals does well because each right leads to many wrongs. The combination of Hot Pursuit and Most Wanted seems like the natural progression for the franchise, but it instead feels like the ideas were ripped and pasted together rather than elegantly weaved. Even the online integration is painfully constructed. The solid driving mechanics are still there from previous games and can still be exciting, but the product around those mechanics is what’s at fault here. The Need for Speed franchise desperately needs to do some soul searching if it wants its longtime fans to continue to be interested.