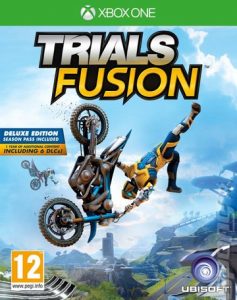 With each new entry in the Trials franchise, my interest seems to be waning. Trials Fusion still has that classic Trials charm and skill-based game play, but like Trials Evolution, the hooks were unable to latch on to me to keep me playing. That said, it does just enough to change up the formula, and the change in art style is much needed for the franchise.

For those unaware of the Trials games, you play as an extreme motorcyclist who tries to clear intricate levels filled with obstacles in the quickest time possible. In order to get to the finish line, you have to balance your rider on your bike to make sure that he doesn’t crash. Ramps, boxes, looming pits of death and an absurd variety of obstacles are littered throughout the levels to test your ability and, later in the game, your patience. It’s comforting to know that the game play hasn’t drastically changed and the feeling of completing a level quickly without crashing is still largely rewarding.

Trials Fusion starts off at a nice and easy pace, with most levels not even really requiring you to let off the gas one bit. For a Trials veteran like myself, I found myself acquiring the gold medals almost exclusively on my first try. I was mostly bored for the first half of the game as I zoomed by without difficulty, only merely enjoying the luscious new graphics and scenery.

The developers at RedLynx claimed to have over 200 people working on Trials Fusion, which seems ludicrous for how simple in concept it is. However, once I took to the stages, the usage of the manpower became quite apparent in the shape of the level design. Trials Fusion is set in the future and features an overall theme of neon lights and metallic furnishings. You ride along giant solar panels and levitating platforms surrounding satellites, and it all looks beautiful. My favorite in particular was a stage that had my rider’s silhouette driving along rocky terrain as a gorgeous sun rises in the background. 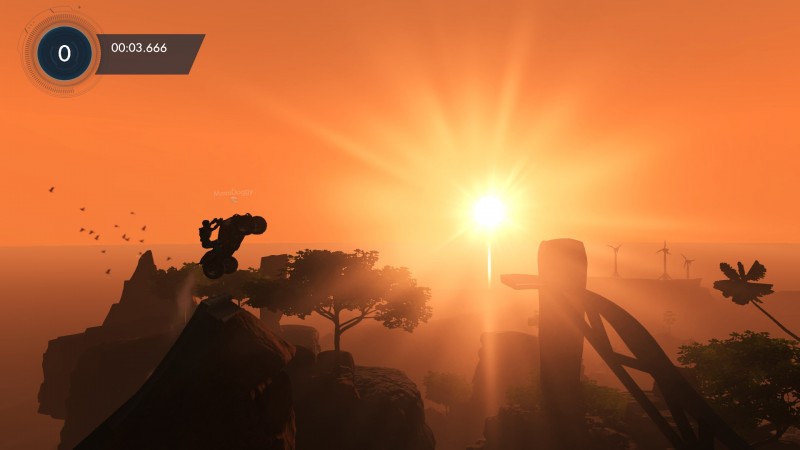 The beautiful graphics in Trials Fusion make crashing over and over again a bit more tolerable.

Along with the newly updated palette are a few additions to how you spend your time with Trials Fusion. Instead of just shooting for the gold or platinum medal on each stage based on time, there are now three challenges for every level. These range from completing a certain number of flips without crashing to finishing the level without leaning at all. I can’t really care for these challenges because the majority of them are insanely difficult. The challenges reward a minuscule amount of experience for your rider, which only unlocks boring cosmetic options for your bike and rider. I love the idea of the challenges, but the agony and time required to complete most of them are overall not worth the end result.

Maybe my patience has just gotten thinner over the years, but the last legs of levels spike up in difficulty to an absurd margin in Trials Fusion. In previous Trials games, the extreme levels were appropriately challenging and really only the last level was excruciatingly hard. In Trials Fusion, the extreme levels are just purely sadistic. Time after time, I would try to overcome certain jumps or dangerous tricks required to progress, but it just wasn’t happening. This wasn’t just a single level either; nearly all the extreme levels feel damn near impossible to complete without meticulously studying the top player’s replay from the leaderboards.

It really is a shame, though, because the medium and hard levels in Trials Fusion feel so perfect. The difficulty is on point, and if I got stuck on a certain point, it was never for very long. They almost play like puzzles in that you have to piece together when to properly lean which way and when to accelerate. Unfortunately, there just aren’t enough of these levels. With the Season Pass for future content blatantly pasted on the main menu, it feels as though RedLynx has officially cashed in on the dreaded downloadable content bandwagon. 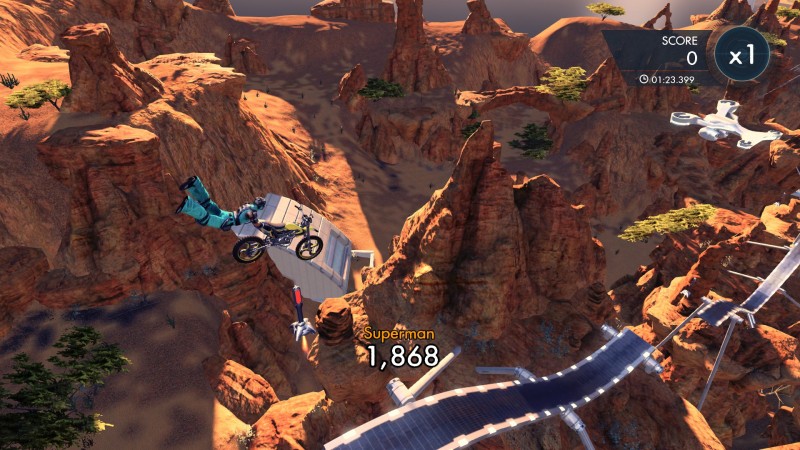 The trick system is not as well defined as the racing mechanics.

Part of the reason for the lessened amount of traditional Trials levels is the addition of the trick system. For each category of levels, there is an FMX level where you perform tricks to accumulate a high score. The tricks are input through the right analog stick when you flick it a certain direction. The problem is that it feels entirely unintuitive. More often than not, I would attempt to do a certain trick, but my rider would just flail around the handlebars and I would receive no points. On top of having to flick the stick the right way, your bike has to be in a certain position for the trick to register. Toward the latter half of my playtime with Trials Fusion, I was getting more consistent with pulling off tricks and combos, but it was still largely clunky. I would’ve rather had much more traditional Trials levels than these annoying FMX levels that I don’t think any Trials fan asked for.

Thankfully, the track editor is back and is as robust as ever to extend the life of Trials Fusion if you feel satisfied with the regular content. I imagine that, in the coming weeks, there will be a myriad of awesome fan-made tracks to keep players’ interest further. I’m not nearly as creative or patient enough to work with the editor to create levels, but it’s great that RedLynx continues to push content creation to the forefront regardless of them heavily advertising downloadable content. 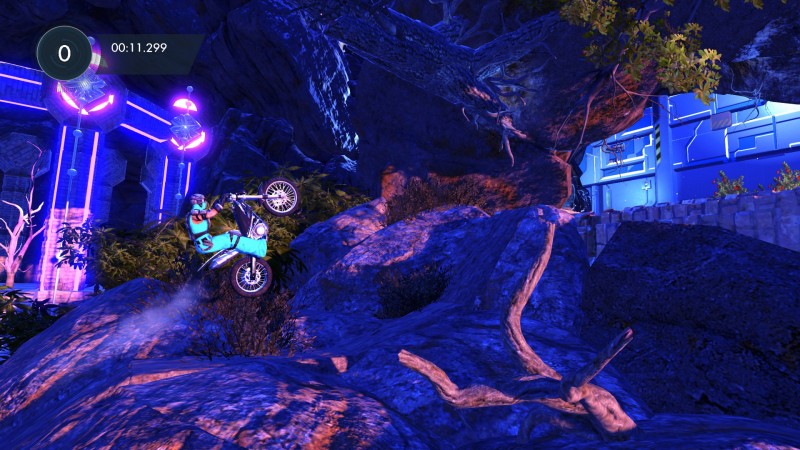 Fans are already creating gorgeous levels like this one.

After playing Trials Fusion for a good amount of time, there was a certain saltiness left in me. I loved the hell out of the futuristic presentation, but the carefully crafted difficulty curve from previous Trials games has gone awry in Trials Fusion. The first half of the game is entirely too easy, and the extreme levels are more ridiculous than challenging. The additions of the trick system and specific level challenges are too halfhearted and not well thought out enough to warrant much enjoyment. Trials Fusion took a step forward in some areas but too many steps backward in others.

Trials Fusion is available on Xbox 360, Xbox One, PlayStation 4 and PC.