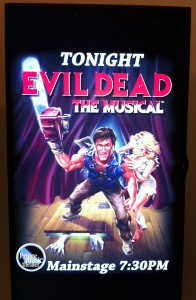 The 1980s cult horror classic gets a musical reimagining in Evil Dead – The Musical.

The campy 1981 horror film Evil Dead from director Sam Raimi has had several sequels and a 2013 remake. Now it’s been immortalized with a parody-rich musical that re-creates much of the original film.

Fans of the film will immediately recognize key plot elements and obscure references, but patrons need not have seen any of the films to enjoy the experience.

The story is about five students who break into a stranger’s cabin out in the deep woods in search of some adventure. They get more than they bargained for when they encounter an ancient skin-covered book called The Book of the Dead. They also find an audiotape with it, and curious to know what’s on it, they unwittingly summon pure evil.

The musical takes place on a limited number of sets that generally include the cabin and the surrounding woods. The sets outside the cabin are fairly basic in nature, while the cabin is a bit more detailed. The story is presented in two acts. The first act includes nine musical numbers, while the second has eight.

Patrons should also know that the first few rows are designated as Splatter Zone seats. They’re covered in plastic for good reason. As the play progresses, the blood becomes more prevalent and begins to cover everyone in those rows. It’s basically just red-colored water. It was pretty clear from the audience on hand that fans came ready with plain white T-shirts or shirts covered in “blood” from other shows.

The cast does a nice job with the material. Ward, as Ash, originated the role back in 2003 and has a very strong resemblance to Bruce Campbell, who played Ash in the original films. Tremblay is also a standout, playing both Shelly and (later) Annie. We also get a wonderful performance from Daniel Williston as Jake, a backwoods type who comes along later in the show.

The musical itself is mainly a winner. It’s filled with a myriad of highs including some great jokes, winning props and some good musical numbers. The best song of the show is the long-worded “All the Men in My Life Keep Getting Killed by Candarian Demons.” You’ll also hear the cute “Housewares Employee” several times in various reprises. There are also a few really wonderful lighting effects.

There are some missteps along the way. The biggest number in the show is “Do the Necronomicon,” which is intended to be the show’s secret social weapon along the lines of the oddly similar “Time Warp” from The Rocky Horror Picture Show. Unfortunately, it just isn’t as catchy and runs on far too long.

There were also a couple of major technical problems at the newly renovated Prince Music Theater that need to be ironed out. The music was several decibels too loud, often drowning out the lyrics underneath them, which also ruined some potentially good lines. My showing also suffered from several microphone feedback issues that seemed to be worked out by the second act.

All in all, this rendition of the story is perfectly campy, wonderfully funny and a good time for almost everyone.