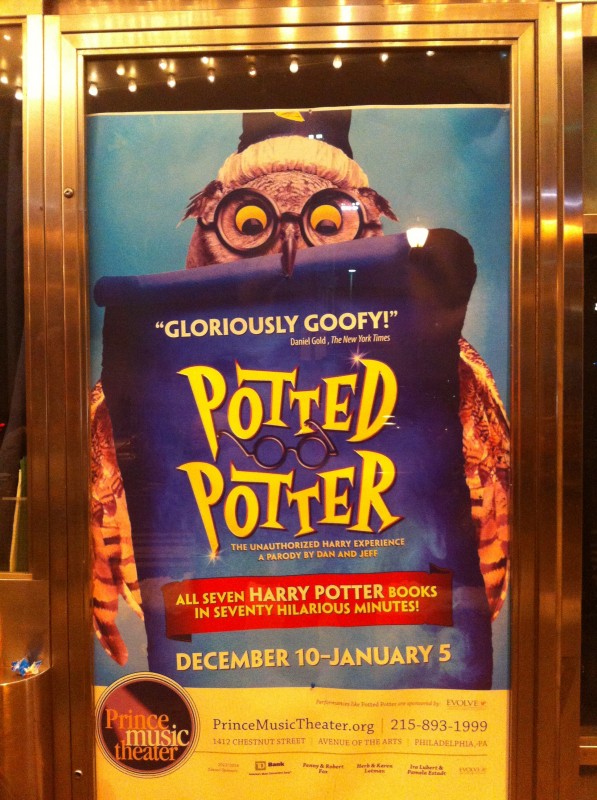 Parody and satire are two of the most difficult types of humor to pull off successfully. They both require some familiarity with the material that’s being targeted. Parody is usually more obvious and broader, while satire can be subtle as well as biting. When I think of parody, I immediately think of MAD Magazine, the long-running humor magazine that regularly prints parodies of movies and TV shows in every issue. Potted Potter is an unauthorized parody of J.K. Rowling’s Harry Potter book series that manages to walk the fine line of reverence and silliness. Although knowledge of the books or, at least, movies will enhance the experience, it’s really not necessary. Potted Potter is a clever mix of slapstick comedy, witty dialogue and audience interaction that Muggle (non-wizard, i.e., human) audiences of all ages and levels of Harry Potter addiction will enjoy.

Potted Potter comes from the slightly twisted minds of English co-creators Daniel (Dan) Clarkson and Jefferson (Jeff) Turner. This explains the billing as “The Unauthorized Harry Experience — A Parody by Dan and Jeff.” They devised a short street show to entertain people waiting in line for one of the book releases and later expanded it in 2006 to an hour-long theater performance that covered the six books released at that time. The publication of the seventh book in the series resulted in a longer show with a conclusion much like the book’s — that is, if it were expressed via a popular disco song. I traveled to New York City to see Dan and Jeff at the Little Shubert Theatre back in 2012, and the current tour is finishing up 2013 here in Philadelphia at the Prince Music Theater through January 5 with rotating performers James Percy, Delme Thomas and Gary Trainor. I saw James and Delme, and they are every bit as talented and funny as Dan and Jeff if not more so because they simply have different mannerisms and energy than the originators.

The ads all tout that all seven Harry Potter books will be acted out in about 70 minutes. That’s not exactly true because some books get more attention than others, and that 70-minute run time sells them short because it can clearly go longer depending on the exuberance of the audience and the energy that they feed back to the duo. I attended on a night with a nearly packed house, and the mixture of people certainly made the show more fun. The goal is for the performers to summarize and explore the books. There’s a problem, though, because one actor (James) knows the books inside and out and the other (Delme) has some catching up to do. There’s a running gag in the show that Delme spent the show’s entire budget on a magnificent dragon for the fourth book rather than hiring additional actors to play the many characters in the books. James decides to only play Harry, and Delme’s “punishment” is to portray all of the other characters. This pegs James as the pedantic straight man and Delme as the manic foil in homage to many of the great comedy duos of stage and screen. This division of labor is brilliant, and I wonder if James and Delme ever switch places. That would inspire me to see the show yet again if that were true and I could find out that information in advance.

The set is rather simple with a few props that serve as sight gags and backdrops for Delme to hide behind when he switches costumes. The hats, wigs, beards, puppets and other adornments are largely visual cues rather than well-designed costumes, and in one hilarious scene, Delme makes as many character/wardrobe changes as “Weird Al” Yankovic does in one of his medleys. Seeing the show twice made me appreciate how much the show is scripted, how many lines the performers have to get just right with their wonderful comedic timing and how many places there are for improvisation and jabs at the audience. Many pop culture events have happened since I last saw the show, and some bits were brought current with references to Miley Cyrus, twerking and One Direction. I can’t imagine the show with American actors. The books are British in origin, so it just makes sense to have British actors. If there’s any real problem with the show, it’s that the source material is complete and unlikely to get an update. Still, I can envision a second incarnation of Potted Potter in which they switch the material to feature different parts of the books — I’d love to see a live potions class or Peeves the poltergeist — and guarantee that audiences will hurry back via broomstick or, perhaps, boring Muggle vehicles.

The highlight of Potted Potter is certainly the live Quidditch match in which the audience is roughly divided into two halves to both cheer and play for the Gryffindor and Slytherin school houses in the books’ Hogwarts School of Witchcraft and Wizardry. A beach ball that looks like the world is batted around the audience with the goal to get the ball into the other team’s hoop on the side of the theater. The hoops are a little out of reach at the theater. In New York City, the hoops were more open and accessible. However, in both shows, nobody scored any points, and the whole game turned into nothing more than people knocking the ball around as if at a concert. I had the idea to grab the ball and run it over to the hoop for a better shot, but the ball never came near me. Moreover, these efforts ultimately mean nothing in Quidditch because most matches come down to the player who catches the skittish Golden Snitch. James and Delme work the Snitch into the game, and that offers another chance for audience interaction and one spectacular Snitch appearance. In a world with intercollegiate Quidditch tournaments, Potted Potter delivers a taste of the sport’s fun with none of the bruises. 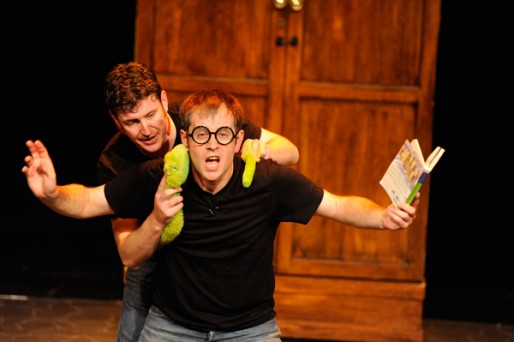 Dan and Jeff, Potted Potter creators, in action on stage.

I was as impressed with Potted Potter now as I was over a year ago. Dan and Jeff smartly brought other performers on board to expand the reach of the show, and there’s no reason that these multiple touring groups can’t continue indefinitely in various cities a la Blue Man Group. Look for the merchandise table and, more importantly, an alcoholic butterbeer that fits the show. Although the Harry Potter books and films were completed long ago, the interest in the series continues with the Universal Studios Potter-themed park and various other events throughout the year. I attended a Harry Potter day at a Philadelphia museum that featured classes, games, a scavenger hunt and even a concert featuring “Wizard rock” bands (Potter-themed songs and band names like Draco and the Malfoys and The Whomping Willows). Potted Potter takes the spirit of such a day and compresses it into a theater show that I didn’t want to end despite the prophetic assurance about Harry and nemesis Lord Voldemort that one of them shall live and one of them shall die. I didn’t see many people in costume at this performance, but feel free to get in the spirit and bring your robes and broom, which may come in handy in Quidditch.