I come from a family that enjoys a hearty beverage with their entertainment. There’s never been a shortage of beer or varied spirits at most family events and I find that’s typical of many American homes. As a child I grew up surrounded, most notably, by beer. I recall seeing many of the beers of America’s past in my youth including my Grandfather’s favorite—Pabst Blue Ribbon.

I also grew up in a time when no one thought twice about offering a sip of such libations to any of the kids. Today such a move would garner a number of disapproving looks in many households. The one oddity for me is that this approach appears to have had exactly the opposite effect on my thinking.

I learned early on that I absolutely abhore the taste of beer. I’d hear the lament that beer is an acquired taste and everyone was quite sure I’d grow into it with time. Instead I took the approach that anything that necessitated an acquired taste was simply another way of saying that it didn’t taste good in the first place and one just got accustomed to it. I apply pretty much the same approach to other drinks including coffee which I liken to smelly mud.

Over the years I’ve found that I enjoy a number of mixed drinks and have found a growing number of wines that I like. I also went through a somewhat regrettable wine cooler period including a fascination with Zima that’s best left nearly unmentioned.

The up side to my choice is that I find I pretty much embody the living example of a purely social drinker. You’ll almost never find me drinking any liquor product by myself or just around the house on a lazy summer afternoon. The idea that a cold beer is the reward for working in the hot sun around the house all afternoon  is entirely foreign to me.

The down side to this approach comes in the form of a bit of peer pressure. Everyone wants you to have a beer. If you’re at a barbeque someone’s likely to try to hand you a beer. If you’re at a baseball game, people all around you are going to be drinking beer. Thus, a bit of me has always been on the lookout for something akin to beer that I could enjoy but that would also not stand out as elitist, feminine or simply odd.

Then a few years back a friend of mine in England started telling me all about cider (with a typical accent that I never forget when I roll the thought around in my head). He was going on about how he spends a decent amount of time down at the corner pub with his mates having a pint of cider. Initially I was entirely confused as my only experience with cider up to that point was of the sugary, non-alcoholic, juice-like variety that’s available here at every supermarket and convenience store. When I mentioned this my English friend didn’t understand what I was talking about at all. A trip to Wikipedia finally cleared up the confusion. It seems that the cider I’m familiar with had its roots firmly planted figuratively and literally in the American northeast with much of the rest of the world familiar with the alcoholic variety instead. 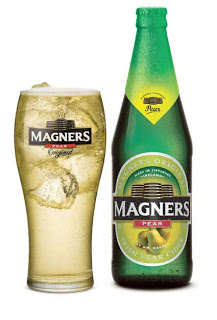 He piqued my interest mainly by saying many of his friends don’t enjoy beers, ales or lagers but love a good cider. He gave me a few names and off I went to experiment. I was actually shocked to find out that cider has been around for quite a long time and, at one time, was actually preferred to beer. In fact, it was so prevalent that it’s what most colonial Americans drank with dinner (as standard water was a bit suspect then). All of that changed with Prohibition and when that finally ended cider was supplanted by beer and nearly vanished here.

In the U.S. the most commonly found cider comes from Vermont called Woodchuck. It comes in several varieties but most of them have one thing in common—they’re all rather sweet. I thought they were okay but I wanted to find some imports to see how they stacked up. It was then that I found Magners and Strongbow. Magners is actually a bit of a story itself as it’s actually from an Irish company called Bulmers but there was a brewery in the U.S. that owned that name. The result was a new sub-brand called Magners.

The first thing you’ll notice about both Magners and Strongbow is that they’re nowhere near as sugary as Woodchuck. Both are, to my palette, much better tasting than Woodchuck but distinctly different. Magners is extremely smooth where Strongbow has a bit of a bite to it. In fact, Strongbow reminds me more of beer than anything else but not in a bad way. The experience with both of these drove me to seek out other brands and I’ve since tried about a dozen different ones.

One day I noticed a different variety of Magners called pear and I first assumed it was a pear-flavored cider. I learned that it’s actually not a cider at all but simply fermented pears and that’s officially referred to as perry. It’s even more smooth than Magners cider and a huge favorite of mine.

Another favorite is a brand I first encountered at an Irish bar in New York City during the last World Cup games called Original Sin. I drank several glasses back then and that was the last I saw of it until it suddenly started showing up on the shelves at a local liquor store. Surprisingly, a relatively new company founded in the late 90’s in New York. That should mean that cider here will get quite competitive with so much competition. We’re close to someone that actually does quite a bit of PR work for Magners so obviously they also see the race ahead of them and that’s great news for any cider fan. Previously cider was being sold at a premium price but lately I’ve notice some nice price drops.

Thankfully I’m also starting to notice that cider is growing-albeit slowly—in popularity and it doesn’t seem to suffer from the stigma past malt beverages (wine coolers and the like) brought with them. It doesn’t hurt that they don’t come served with any sort of umbrella or skewered fruit.