Hello, all. I’m sorry that my post this week is a little late.  We’re nearing the end of my summer travels with my last trip being out to the Beehive State — Utah!

Picking up from where I left off, I flew out of Beijing on July 14 on a 13-hour flight with 12-hour jet lag, so I arrived an hour after I left.  On the morning of the July 15, I flew out to Salt Lake City.  It would have been nice to have had a little time to readjust before I got there, but that was how my schedule worked out.  I went to Utah in order to take a really cool class being offered by the University of Utah called Computational Paleophysiology.

It was run by Dr. Colleen Farmer as well as the various post docs and graduate students working in her lab, one of whom had studied with my professor Dr. Peter Dodson here at Penn.  In a nutshell, computational paleophysiology is applying our modern understanding of animal physiology to extinct animals, using realistic numbers and math derived from living animals.  This means that we estimate things like body mass, cardiac and respiratory efficiency, blood pressure, metabolic rates and diet as well as try to get an estimate of how accurate our calculations actually are. 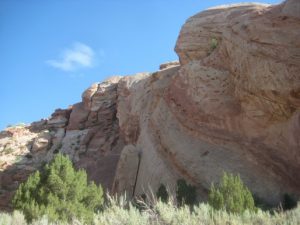 This is part of the Navajo Sandstone Formation from the Jurassic Period.

The first part of the class was an introduction to field work.  Most of the people taking the class — there were about nine or ten of us total — were not actually paleontology students, specifically, and for many people, it was their first time out in the field.  This was lucky for me because, for the week or so that we were actually out in the field, I was still pretty severely jet lagged.  We did some hiking around and looking at rock formations and fossil sites in Utah.  We ended up camping with Utah’s state paleontologist, Jim Kirkland, who is a great guy and always has a story to tell.  We did a very limited amount of work helping them to excavate a sauropod (long-neck) that they had found. 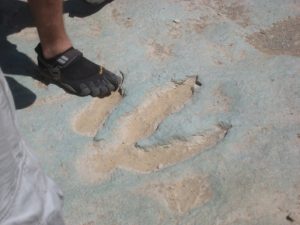 This is a theropod (carnivorous dinosaur) track from a Jurassic Age track site in Utah.

We also had a little fiasco when we were all ready to head back to civilization on the last day.  There were three vans that we’d been driving around in this whole time, borrowed from the geology department, and as we were about to leave, we realized that one of them was missing the keys.  We looked everywhere — all over the campsite, in everyone’s recently packed luggage, in all three cars, up and down the road. We even dug through the trash.  The keys could not be found.  Luckily, there was an extra car that one of the students had driven that did not go off road, and so we managed to shuttle everyone out of the campsite and left a car behind to be picked up later once we went back to Salt Lake City and got a new set of keys. 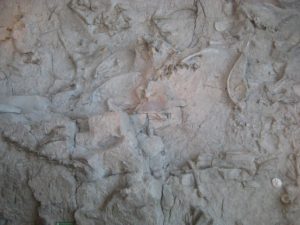 This is a bone bed at Dinosaur National Monument. The bone bed is inside of a building that was built to preserve the fossils there.

Tune in next week for the last installment of my summer travels!