I’ve spent my entire adult life enamored with technology and mainly by computers. Much of my vocational career has been dominated by computing and my hobbies are intricately intertwined with them. 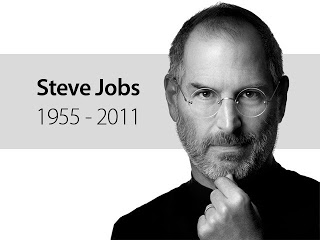 My first computing experience was on a friend’s Apple II system back in the late 1970’s and continuing on into the early 1980’s. The two biggest things I experienced on those systems was Zork and Choplifter. Those two games were all I needed to catapult me on my digital course (though things didn’t feel very digital back then).

Steve Jobs, as co-founder of Apple, is clearly responsible for some of that and it’s greatly appreciated. Sure, other computers would have come along anyway and I’d have likely been just as smitten with one of them but the bottom line is that it was an Apple product that first captured my interest and I’m far from alone in that all these years later. How many others can say today that their first major technology desire was an Apple product? It has to be in the millions if not the tens or hundreds of millions. That’s especially amazing when you consider that for much of Apple’s existence it was thought of as a company that provided niche products.

Jobs had always been a major mover and shaker during my lifetime and everyone knew all about him during his entire career—more so than virtually any other similar celebrity. To paraphrase an old popular commercial, “When Steve Jobs talks people listen.”

It’s hard for people new to Steve Jobs fascination to fully understand just how prevalent this guy was in computing. What’s amazing is that he was always also extremely private. You never heard about him being out on the town or hearing about huge yachts or any kind of questionable personal behavior aside from being rumored to be a bit of a jerk here and there. How rare is that today? Bill Gates, by comparison, seems like Michael Jackson.

I’ll personally never forget the offensive he undertook with John Sculley for the reigns of Apple and it was an amazing story to see him actually lose this battle only to, ultimately, win the war in the end. There was a solid chunk of time that Apple wasn’t headed up by Jobs and, most telling, it was their worst era. Apple without Steve Jobs was simply not Apple. It took Apple years to replace the impact of Steve Wozniak when he left but Jobs was even more intimately tied to the company.

My own interaction with Jobs came not long after he left Apple that first time. He went on to found an enigmatic computer company called NeXT. I believe it was 1986. I’d made a pointed comment in a column about how there simply was no way NeXT would succeed along with some other choice comments. NeXT’s PR rep—someone I’d known for a long time from another company—mentioned during a call that someone wanted to speak with me about those comments. The next thing I knew she said, “Steve, say hello to Rich Heimlich.” She didn’t need to tell me who “Steve” was. Jobs proceeded to lay out his vision for NeXT and within about two minutes my entire perspective shifted. The door opened a sliver and Steve pounced. He pretty much convinced me of what I knew was impossible—that NeXT was going to succeed. Ultimately my initial position proved to be right but that was how good Jobs was. NeXT didn’t fail for lack of enthusiasm from Jobs and it’s his exuberance that stuck with me. I never forgot how infectious his passion was and I try to remember that in everything I do these days.

When Steve finally returned to Apple most people then wrote stories about how Apple was done. God couldn’t save Apple let alone this mere mortal. All we heard about were endless stories about the disaster of the Apple Lisa and the Apple III. None of this, of course, phased Jobs and the rest is history.

When I heard Jobs had stepped down from running Apple I made a mental note—”He’ll be dead within 6 months.” There was simply no way what-so-ever that Jobs would leave that post unless he had absolutely no choice in the matter. I’m sorry to have been right on this one.  Steve Jobs’ fame will only grow now that he’s gone. Apple will never be the same either. Maybe it’ll be better. Maybe it won’t but it won’t be the same. There are few people that I’m glad to have shared time on this planet with but Jobs was one of those few.