Why is it that every single mistake out of Sarah Palin‘s mouth is a “gotcha” moment? No one is able to ask her a single question that, if she gets it wrong, will be made out to represent the press lying in wait for her with a “trick question”.

“Do you know about Paul Revere?“, while moving about New England, and, as a self-proclaimed leader of the Tea Party movement, is hardly a “gotcha” question. 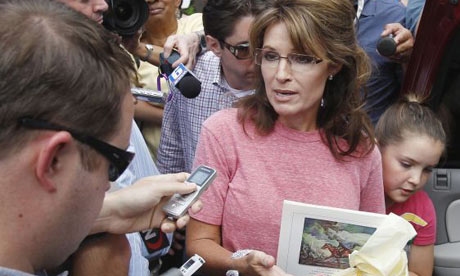 This woman is a buffoon. If you think she’s got what it takes to represent us then I can only shake my head in astonishment that anyone out there buys into the re-imagining of this person.

Today she’s out there not only defending her ridiculous version of history but also again suggesting it’s just another case of the media purposely trying to make her look bad. Perhaps if they ask her what her name is and she flubs it that’ll be their fault too.

Paul Revere, historically, is known for having ridden from Boston to Lexington warning mainly Sam Adams and John Hancock—two of our key founders—that the British Regulars were coming. The more fable-like retailing is him riding through the streets yelling out, “The British are coming!”

In neither account is Revere off “ringin’ those bells”. And what “warning shots”? And lastly, what’s this idiocy she’s defending about him warning us that they were here to take away our arms? None of that was accurate.

She obviously has no real understanding of this issue but in typical fashion just goes ahead and spews off what she thinks she knows about a topic even though it’s dreadfully uninformed. Is this what we need in a politician representing America? That Palin would choose to attempt to play this off as all, not only correct, but also the media’s fault, speaks volumes about her belief in the power of Fox News and their ability to get their audience to believe any version of whatever story needs re-imaging. It’s disgusting.