While looking over some news articles one of them had a photo associated with it that I just couldn’t stop contemplating. The photo is from the 2006 concession speech given by ex-Pennsylvania Senator (and total douche) Rick Santorum. 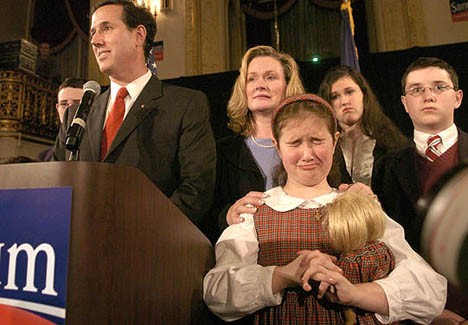 The picture is just frankly bizarre. Is it just me or does everyone but the ex-Senator look like they’ve just returned from Gitmo?

His wife here looks like a poster rep on the effects of having seven children. She looks twice the age of Rick and ready to snap. His poor daughter in the foreground looks like someone told her there wasn’t going to be any more cake. I also love the matching outfit on the doll (American Girl perhaps?) His son really looks like someone just stuck a broomstick where one shouldn’t be. I think his expression is the best of the lot. Finally you’ve got the other daughter who looks like the perfect graphic for the word, “Bummer”.