Last night I got my first up-close look at the Occupy Philadelphia effort and, I have to say, it was a pretty awe-inspiring sight. City Hall looked like it had been carefully re-zoned as a campground site with literally hundreds of tents set in very organized rows and columns all over the grounds. There were information tents, training tents, book-share tents, food tents and mainly a lot of 20-somethings all engaged in the process at every level. No one was being disobedient and they were all out there interacting and sharing their views and perspectives in a way that no amount of time spent in a civics class could possibly match. These people were learning, first-hand, the awesome power and responsibility of a democracy and citizenship. I felt prouder to be an American having witnessed that than I have been in a long time. Politics aside—go see it for yourself before forming your opinion on these people. What I witnessed in no way could be viewed as a negative experience or a harmful one. 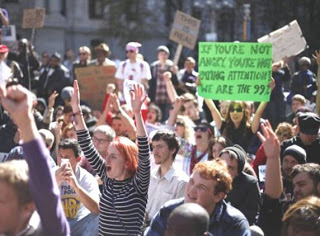 Contrast that with what I’m seeing on Fox News which makes this entire effort out to be anti-American and full of lunatics and slackers. I defy most anyone to go do what these kids are doing and view it as slacking off. However, one thing was starkly clear to me after watching several Fox News segments and that’s how very much all of those involved in criticizing these efforts look and act exactly like the same out-of-touch people who ridiculed the protesters of the Vietnam war.

Suddenly, in one reaction the hard Right of this country has become exactly what many of them despised 40-plus years ago.  The same confused looks. The same mystified commentary. It’s all there for the viewing and it’s all going to turn out exactly the same way—with those who don’t get it simply left behind and forgotten—and that’s a good thing.