Last night I watched a bit of Glenn Beck‘s show on Fox News and it’s really devolved into a bigger joke than it ever was before. 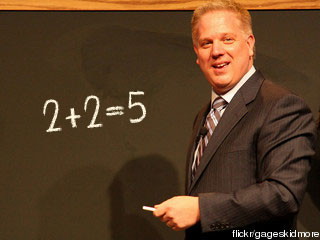 His show really should move to the TBN channel (Trinity Broadcasting Network) to run alongside all the other evangelical shows there. His show is virtually indistinguishable from any one of them at this point. Beck continually talks about evil and sin and how he, and he alone, has been hearing from God about “the plan” and how important it is that everyone listen to him to know what to do next and to really understand what’s going on.

Franky, it’s all quite disgusting. From now on if anyone tells me they really connect with this guy I’m going to immediately end the conversation and try not to belittle them to their face before taking my leave as soon as possible.

Beck continually makes arguments that are so paper-thin that they stand up to no scrutiny. Yet he has a huge following. Take a typical comment he made last night while working on his now infamous chalk board: In discussing the Arizona illegal immigration issue Beck finds it hypocritical that President Barack Obama believes the law will be found unconstitutional and has issues with people needing to provide a green card when asked for one. Why? Because this is the same guy who wants to make it mandatory to provide proof that you’re eligible for health care.

Of course he doesn’t point out that in the Arizona case it means legal citizens need to be walking around, at all times, carrying a green card in case they get stopped randomly on the street while Obama is talking about providing proof of health care insurance when the patient is proactively seeking health care. In other words these two things have nothing to do with one another except in Glenn Beck’s twisted fantasy world.