The current news cycle is full of great commentary on the dawning realization that Mitt Romney is very likely to be the GOP‘s candidate come next November. The biggest issue of contention is his Mormon faith and the ballerina-like moves the other candidates are employing to avoid having to say what they really believe about Romney and Mormonism. 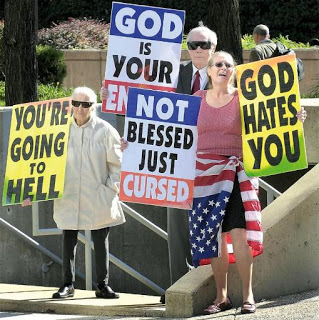 All of this stems from a typical comment from the evangelicals that the Republicans have anchored their boat to for better or worse. In a major event Dallas Pastor Robert Jeffress called the Mormon faith a “cult” and said “Mormonism is not Christianity.” He also said, “He’s a good moral man, but those of us who are born again followers of Christ should prefer a competent Christian.”

Take, for example, this comment from former Senator Rick Santorum: “Mitt Romney says he is a Christian.” Really? That’s your answer? Well Barack Obama said he was born here, said he’s not a socialist, said the health care plan he signed will be a great program and yet none of that seemed to matter at the time.

Then we get current anomaly Herman Cain‘s comment on the situation: “I believe that they believe they are Christians.” I also believe that Osama bin Laden believed he was doing the right thing by attacking us. What the hell kind of useless double-talk is this? What sort of reporter lets that go unchecked and what sort of follower hears that and believes it’s a good response?

Since when is someone claiming something proof to anyone that it’s a fact? The only fact here is that none of these candidates are willing to actually say anything they actually believe for fear of having anything possibly stick to them that might later be used against them. I believe you believe the sun will come up tomorrow. What do I believe about the sun coming up tomorrow? Well, if I were an GOP candidate running for President we’d likely never know.