On April 10th, 1951 then President Harry S. Truman issued the order to relieve legendary General Douglas MacArthur as Supreme Commander in charge of our war efforts in Korea.

The comments that did him in were as follows:

“It seems strangely difficult for some to realize that here in Asia is where the Communist conspirators have elected to make their play for global conquest, and that we have joined the issue thus raised on the battlefield; that here we fight Europe’s war with arms while the diplomats there still fight it with words; that if we lose the war to communism in Asia the fall of Europe is inevitable, win it and Europe most probably would avoid war and yet preserve freedom. As you pointed out, we must win. There is no substitute for victory.” 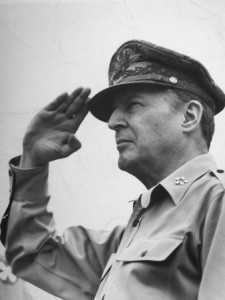 I’ll bet most today can read that several times through and not see what all the fuss was about. The point then as now is that MacArthur, with these words, was publicly critical of the limited war policy of his boss—a policy that he was in charge of enacting.

MacArthur’s removal was highly controversial. In fact a Congressional committee, spear-headed by Democrats, was formed to investigate the details of the dismissal. They ended up realizing Truman was in the right.

Today we have General Stanley McChrystal, the top U.S. commander in Afghanistan, being summoned to the White House to discuss a highly-negative interview he gave to Rolling Stone magazine. The right wing punditry are twisting themselves into pretzels trying to explain their support for McChrystal as all things out of this administration must be despised.

McChrystal’s comments were so out-of-bounds that he’s already personally apologized for them. Among them he said President Barack Obama looked “uncomfortable and intimidated” by the roomful of military brass.

You cannot go around talking about your boss as looking “uncomfortable and intimidated”, publicly, and expect to keep your job. Plus this is just one of several embarrassing comments.

I would expect McChrystal to show up today, resignation in-hand, and let the President decide whether or not to accept it.