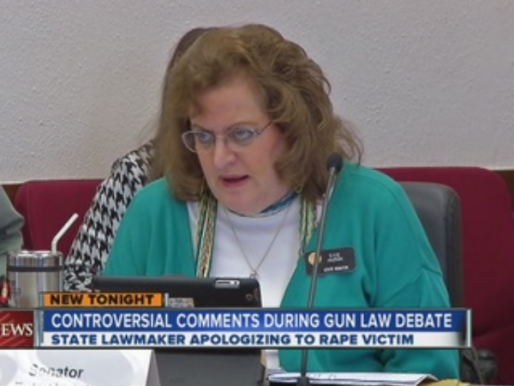 Peter Hampsen of the New Hampshire House of Representatives used vaginas as shorthand for women in an email to colleagues. This news item has been picked up by Think Progress, The Political Wire, Mediaite, and New York magazine, which currently lists “N.H. Defends Vaginas’ Right to Bear Arms” as a top story.

He hasn’t been the only state legislator to get in trouble this month. In New York, state senator Malcolm Smith was recently arrested as part of a plot to bribe Republican officials to get on the ballot for the New York City mayoral primary. Eric Stevenson, another New York legislator, was arrested in a different bribery scandal. One of his colleagues resigned as part of a plea bargain with authorities. He had been their informant for years.

Every now and then, a state representative or state senator gets attention for saying or doing something really stupid. There are many other examples. A while back four members of the New Hampshire House of Representatives formally questioned President Obama’s birth certificate.  At around the same time, state representative Curry Todd of Tennessee was arrested for drunk-driving, providing some schadenfreude as he had previously compared illegal immigrants to rats. Maryland state senator Ulysses Curie claimed that he lacked the intelligence to have been involved in a bribery and extortion scheme. The worst of them be the Montana state representative who got some attention for an impassioned speech on drunk driving. He was in favor of the practice.

The most obvious reason this happens is that there are a lot of state lawmakers. If you add up all the state senators and state representatives (the equivalents are known as assemblymen in five states and members of the House of Delegates in three others), you’ll discover that there are a total of 7,382 state legislators in the country. In any group that large, you’ll find people capable of doing or saying things that are breathtakingly stupid. The numbers also increase if you add former state legislators and candidates for the office.

Because there are so many state legislators, there are less barriers for election into the office than there is with the US Congress. The Chronicle of Higher Education noted that a quarter of state legislators lacked bachelors degrees, compared to eight percent of the US House of Representatives. It’s a bit elitist to say this, but it suggests that dimmer and less-educated candidates are more likely to be stuck at local office.

The districts are smaller and more homogeneous, which means that many candidates don’t need to impress diverse groups. There will be many single issue voters, and those topics may be well outside the mainstream. And things that may be a problem when trying to appeal to a larger group can be an advantage when trying to appeal to individuals within a specific demographic. If the majority of the constituents don’t have college degrees, the lack of one can make someone who wants to be their state representative more appealing.

I’ve noticed that a majority of the complaints about state legislators seem to be about Republicans. There’s probably a slight media bias, as the average center-left reporter or blogger will find something a far-right Republican says to be more outrageous than anything a far-left Democrat says. It’s also more socially acceptable to mock certain Republican constituencies (ignorant white people, social conservatives, older voters) than it is to mock certain Democratic constituencies. In addition, after the 2010 and 2011 elections, there are simply more Republican local office holders. Whenever a party does well, some incompetent people are going to get elected into office and some moderates are going to lose in districts that favor the other party. There were some swings towards the Democrats in 2012, so it’s possible we’ll see more stories about their worse legislators in the near future, as citizens who were previously obscure find that they now have a bully pulpit.

The effects are compounded with the New Hampshire House of Representatives. It’s a small state with one of the largest legislative bodies in the country: 400 members, each representing an average of 3,300 residents. 2010 was a very good year for the Republicans, as the House switched from Democratic control to a nearly 3:1 Republican majority. Any swing that big will result in Republicans outside the mainstream becoming lawmakers. This probably explains why 22 New Hampshire state representatives endorsed Ron Paul for President. In the 2012 elections, the pendulum swung the other way, as the Democrats regained their majority.

There are sometimes idiotic small-town mayors who get attention, but they’re often completely unknown outside of their communities. A state representative from the same town would have some impact on the entire state, along with slightly higher name recognition. They’ll be known to reporters who cover the state capitol.

State Senator, State Representative or Assemblyman also sounds like an impressive position, and makes for a catchy headline. Media outlets sometimes cheat to try to suggest that an arrested state senator was actually a United States Senator. It makes ad hominem attacks quite easy. Whenever a state legislator does something stupid, partisans could try to suggest that the actions of one person implicate an entire political party, so there’s also that incentive to advertise any misdeeds. And the crackpots who agree with a crazed state senator would try to use this to bolster their claims, further publicizing the actions of kooky office-holders.