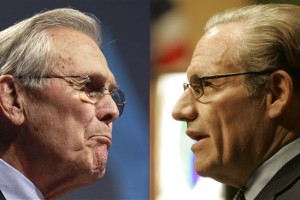 One of the neat things about having a journalist on hand for virtually an entire administration as Bob Woodward was during the Bush years is that you’ve got someone trained and experienced at taking copious and accurate notes on virtually everything.

In a recent column Woodward shares the following item regarding Don Rumsfeld‘s re-imagining of his time as the Secretary of Defense:

On July 7 and 8, 2006, I conducted nearly three hours of interviews with Rumsfeld. Near the end, I heard the final denial. I quoted Secretary of Defense Robert McNamara who had said, “Any military commander who is honest with you will say he’s made mistakes that have cost lives.”

“Is that correct?” I asked.

“I don’t know. I suppose that a military commander —”

“Which you are,” I interrupted.

“Yes, yes,” I said, raising my hand in the air and ticking off the chain of command. “It’s commander in chief, secretary of defense, combatant commander.”

He said, “I can see a military commander in a uniform who is engaged in a conflict having to make decisions that result in people living or dying and that that would be a truth. And certainly if you go up the chain to the civilian side to the president and to me, you could by indirection, two or three steps removed, make the case.“

So here we have a guy, one step ahead of the commanders and one step below the President who doesn’t seem to get that he’s part of the military side of our government and that his actions have repercussions that can cost people their lives. With that sort of complete ignorance no wonder the guy shows no outward signs of remorse. Heck, in his view he wasn’t even involved.