I eagerly awaited the release of the latest incarnation of the Civ series, Civilization IV. I stopped by the local GameStop and was surprised to find none of them on the shelves. Thankfully I asked a worker there who promptly pulled the “Special Edition” version from a newly opened box. 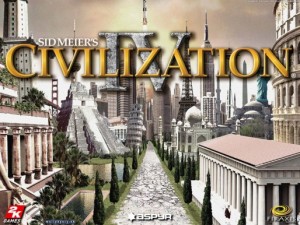 I then got it home and installed it. Playing would have to wait a bit as it was time for my wife and I to watch the latest episodes of The West Wing and Out of Practice. Ironically both feature Stockard Channing but that has nothing to do with the viewing order. The West Wing has been much improved this year and tonight’s episode was excellent. Out of Practice is a reach for us. We’re hoping that the creative people behind it (who were involved with Cheers and Frasier) are enough to make this a winner. So far it’s been decent at best and awkward at worst.

Anyway, after catching up it was time to give the game a shot. I launch it to be informed that the game cannot start because it cannot find D3DX_26.DLL. I have the latest DX9 installed but apparently that’s not good enough. A quick check of Google denotes some odd situation with new “D3” runtimes that are some extension of DX9. I didn’t want to get too involved in this so I skipped to the end and found I could install the missing file manually, which I did.

I re-launch the game to be told I don’t have the right CD in the drive. Okay, now I’m getting perturbed. I go to 2KGames website and, surprisingly, find that not only do they have a support phone number that is easy to find but it’s also toll-free! What a refreshing change. I pick up the phone and call the number. Apparently 2KGames is a British company as is clearly evidenced by the female voice informing me that I’ve reached the right number. I then get put on hold and moments later the voice returns to say that they’re too busy to talk to me now and requests I call back later. Why is this sort of response even an option? I don’t want to call back later. I’d rather sit on hold for 4 hours than to call back later to be told then to call back later.

I then search the web again and find a forum where a subject reads, “Install disc is actually Play disc”. Ah! CD1 and 2 are labeled “Install” and “Play” accordingly so this could just be a late change or misprint. Good!

I swap the discs and launch the game. I’m informed again that the CD is wrong. There’s also a link that claims to provide you with more information about the problem if you click it. I do and it takes you to the Civ IV website’s home page. No information. Great.

I then decide I want to write this up on the blog so I type all this and decide I’d like to post the exact CD error message so I re-launch the game to get the error message and, presto, the game loads. I can’t even get an error message when I want it.

I’m now finishing this up as the intro is running in the background. I’d better get back to it before Civ IV decides it doesn’t like being left alone.

UPDATE: Too late. I switched back to the game to find a beautiful view of the Earth from just above it. There’s a layer of clouds floating over the globe and you get to see an amazing sunrise and sunset effect from this vantage point. There’s also some great, compelling African music along with a gold cursor. That’s it. No menu, no options. I click buttons, hit the space bar, the Escape key, Enter key. Nothing. Just more music. I had to CTRL-ALT-DEL and shut it down. Better luck next time I can only hope.

Next time wasn’t an improvement. I loaded the game and the same menu appeared. This time, when I hit Enter, the title banner above the Earth went away leaving just the Earthscape. I hit Esc and the banner re-appeared. Doh! I then tried several mouse clicks which actually caused the title screen to go away entirely. I had delusions of the game then starting when, instead, I was shown the “Loading” screen again followed by the nice Earthscape which will soon degrade into the God-forsaken Earthscape and soon after that, the shattered LCD monitor Earthscape. I clicked the mouse on the title text and the screen went blank again. However, this time I hear a voice from the darkness—”Hello, my name is Sid. Welcome to Civilization IV.” Then some basic characters appear perched on some land with darkness all around them. It looks as if I’ve made it into the game! I then move the mouse around a bit and see a nice scrolling effect. Something triggers a helpful overlay to appear showing me how to move the characters using the numeric keypad. I hit the 1/End key on the keypad. The game locks up. I drop my head in disgust and close the application via the Task Manager yet again.

Why does this sort of thing always happen to me?