The word “hanabi” is Japanese for “fireworks”. It also happens to be a highly original card game that I absolutely love.

Hanabi is a co-operative card game for 2 to 5 players ages 8 and up. I found it works best with 3 or 4 players. It generally takes less than 30 minutes to play. 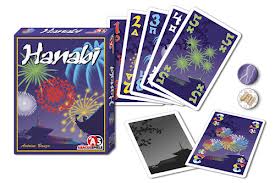 The catch is that no one sees their own hand of cards. Each player is dealt four or five cards (depending on the number of players) and then you pick the hand up “backwards”. That is, you look at the back of the cards while holding the faces of each card towards the rest of the players. Of course everyone else sees your cards and the cards of everyone else but not theirs.

On a player’s turn they can give a hint to any other player about their hand (turning a hint marker over in the process to keep track), play a card to the table (followed by drawing a card to refill your hand) or discard a card and draw another from the draw pile. Discarding also gets you a used hint back (just flip over one of the used hint markers).

The goal of the game is to complete the best fireworks (ahem) by laying down cards in sequential order for each suit. In other words, you can’t play a blue 2 until the blue 1 is on the table. Likewise you can’t play the red 5 until there’s a red 1, 2, 3 and 4 already down.

The hints are the key to all card play and you’re limited in the kinds of hints you can give. For example, you can tell another player either about a single number in their hand or a single color. However, in either case if there are more than one of the same number or more than one of the same color then you must tell the player that. In order words, if a player has two 3’s in his hand you could say, “These are your 3’s” (pointing specifically to the two cards in his hand that are 3’s). You could also say, “These are your white cards“, “These are your 1’s“, “This is your 5” or perhaps, “This is your only green card“.

That player then has a growing amount of information about their hand. A typical first clue is to tell someone at the table, “This is your 1” and that will prompt them to put that card on the table on their turn.

If at any time a player plays a card out of sequence or incorrectly (like playing a second white 2) then the team loses one of their lives. That card is removed from play and the player draws a replacement card.

The main key is to give players enough information about their hand for them to be able to make timely and effective plays on their turn. Remember that if you tell a player which of his cards are white and then, later, which are 1’s, they can then derive other information from that. They know their other cards aren’t white and aren’t 1’s. However, as play continues players’ hands change and thus it gets harder to know what’s in your hand.

The game gets harder as it goes along. Remember that there’s only a single 5 in each suit while there are “plenty” of 1’s. Every card played to the table gets you a point towards a final score with any score over about 20 representing a good game. A perfect score is 25. To get a perfect score means that no one can wrongly discard any of the 5’s or, worse, both of the 2’s, 3’s or 4’s of a single suit.

Another thing to be aware of is that random table talk or even laughs, sighs or looks can give other players information and that goes against the idea of the game. Mistakes happen but must be watched. If you point to a card and tell the player that it’s a 3 only to then realize they have another, you must point that out to them but then you’ve also just told them which 3 is important right now. Make sure your clues are accurate.

Aside from that it’s a fascinating game that pulls you back time and again to keep shooting for a perfect score. It’s certainly not for everyone as it could prove frustrating for impatient types, but for everyone else, it’s a blast.

Just how popular is it? Just go try to buy a copy. It goes for about $12 but it’s continually unavailable on all the major online sites. When it is in stock it goes quickly. Best of luck.