Timeline is a simple little game that we’ve been playing of late. The core game (now more accurately referred to as Timeline: Inventions) comes with 110 cards that depict inventions throughout human history. The cards have a picture of the invention on both sides and its name. On just one side of the card you’ll also find the year of its invention. Inventions include nearly everything you can imagine from the ball point pen, the brick, the compact disc and paper to name just a small sampling. 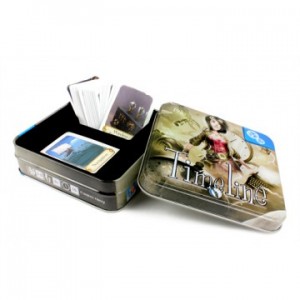 The goal of the game is to be the first person to get rid of all your cards (everyone gets an equal number of turns should someone go out before you when you haven’t had as many turns as them). In the case of multiple players going out then the tying players draw one card each and place them until the tie is broken.The cards are carefully shuffled and everyone receives four cards with the dates carefully hidden on the bottom of the card. Then a single card is taken from the deck and flipped over to show its date. This is the starting card. It’s placed in the center of the table where everyone can see it. Players then take turns placing one of their four cards in a row either to the left of this card or to the right of it depending on when the player believes it was invented in comparison to the starting card. For example, say the starting card is Wireless Transmission. We see on the card that it was invented in 1896. You have four cards to select from so looking them over, if you think the one you want to play was invented before 1896 you’d place it to the left of Wireless Transmission. If you think it was invented after 1896 then you place it to the right. Once placed, the player flips the card over showing its date. If the placement is correct the card stays and the play moves to the next player. If the placement is incorrect the player’s card is discarded and they take another card from the draw pile. Play then moves to the next player. Ties for the year are correct and play proceeds accordingly. It’s really that simple. The row you build is, in effect, a timeline of inventions and thus the name. 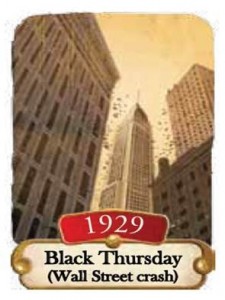 It sounds very simple, and it is, but that doesn’t make it any less fun. You’ll find yourself continually challenged to guess when something was invented. As the timeline grows the game becomes harder since the gaps in years between inventions gets smaller with each successful play. Strategy definitely comes into play. For example, new players will often play their most obvious cards first. They know Cave Painting came long before The Laptop Computer. The problem with this approach is that their harder cards will only continue to get more difficult to play as the game progresses.

It’s far from a perfect game. Cards are easily flipped over by mistake so it helps to drive home the importance of handling the cards carefully at the start. The criticism of the game from serious gamers involves the years as printed. Arguments have ensued over some cards and their purported date of invention. However, casual players will find no such trouble–with an exception I’ll touch on in a moment.

The core game now benefits from having had three expansions that can be added to the core game at will or played independently. These include Timeline: Discoveries, Timeline: Events and Timeline: Diversity. Each of these come with 109 cards (why not 110 like the core game I have no clue about). Now about that exception I mentioned. We’ve run into a situation where, with all the expansions, there are two Neanderthal cards worded identically but they show two different years. Oops. There also have been rare cases where one card references an event (like the burning down of a building) while another card lists the year of the creation of that building after its supposed destruction.  Again, while this should be corrected it hasn’t yet spoiled the fun for us.

One other concern is the impact of replayability. Clearly this isn’t a game you’ll want to play every weekend for months on end. You are more apt to begin to memorize some dates which isn’t exactly the worst problem to have. This is more of a nice “filler” game to break out with a diverse group of friends. The only exception to this that I can think of is that there’s an iPhone version and I just can’t imagine that being much fun after a few plays.

The game works with just about any number of players though officially it’s listed as 2-8 players. It also is a short game generally taking about 20 minutes to play.  It’s never failed to work with casual gamers or non-gamers.