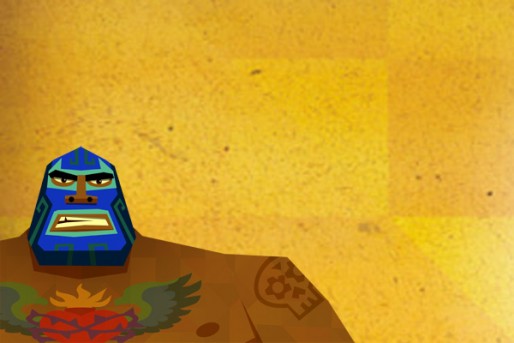 There is something to be said that in the slew of high-production, AAA titles that have been released this spring, a $15 downloadable PlayStation 3 game is some of the most fun I’ve had this year. Guacamelee!, from small developer DrinkBox, is that game. It offers a fantastic experience with its quirky presentation, excellent combat mechanics and satisfying platforming. It focuses less on the compelling story and flashiness that many titles strive for, and the result is sheer fun that often evokes feelings of nostalgia from classic games like Metroid or Castlevania.

In Guacamelee!, you star as Juan, a simple agave farmer in Mexico during Las Días de Los Muertos, or Day of the Dead. The story takes off in a heartbeat when the president’s daughter is captured by the malicious Calaca. Juan, of course, tries to intervene to save her but dies at the hand of Calaca instantly. After being revived in the “dead world,” Juan stumbles upon a magical luchador mask that grants him the strength and fighting capabilities to save the president’s daughter, and your journey begins.

The story is very traditional and similar to classic retro games in that you are simply trying to save the damsel in distress. It is obvious the story is not the strong point of the game, but the characters and setting give Guacamelee! so much charm that you don’t really mind. Adding to this charm are the vast amounts of references to past games, movies and even memes. It seems a bit jarring at first, but as you buy into the presentation of the game, the references become almost endearing. The visuals are absolutely gorgeous with colors popping out in every detail. Environments vary from luscious green treetops to heavily purple-hued mountains, showing that, even in the midst of all the action, the scenery is truly inspiring 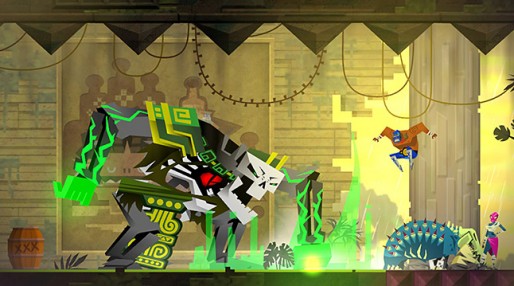 Described as a “MetroidVania” clone in which the game gives you a vast world to explore and use new abilities earned to journey further, Guacamelee! executes the formula nearly perfectly. The environments are littered with secrets guarded by different colored blocks that can be destroyed by new powers that you gradually unlock throughout the game, revealing health or stamina upgrades. There is a genuine excitement that occurs when you obtain a new power that can be used to destroy a certain block you saw in past areas, and unlike many adventure games, you are compelled to backtrack to these areas. While the actual game is short (around 4-6 hours), going for the 100% completion doesn’t feel like a chore in the slightest, giving you more game for your buck.

Much of the game play in Guacamelee! is combating the evil minions of Calaca that stand in your way. The combat is quick and surprisingly deep as you continue to learn new luchador moves as you play. It appears to be simply a beat-em-up style of fighting, but after a couple of hours, lengthy combos — coupled with dodging and jumping — result in immense satisfaction. The combat never feels stale because of new enemies being thrown your way or gaining new shields that can only be broken by specific powers, requiring you to adapt your fighting style as you play. The fighting in Guacamelee! never feels overly difficult, and the boss battles are appropriately challenging.

In between all the fighting are platforming sequences that are truly a pleasure to traverse. There are so many clever game play mechanics that consistently keep the platforming feeling fresh, whether it be wall jumping or learning a luchador uppercut to reach new areas. Not only does this allow for consistent change in pace but also for new locales to be explored, such as learning how to double jump to climb a gargantuan tree or learning to slam your belly down into deep caverns.

The platforming is designed in a way that rewards quick reactions and intelligence as well as curiosity to find secrets. From a design perspective, DrinkBox implements these specific areas in a way that isn’t punishing, and can easily be performed with some thought on how to approach them. The more complicated platforming sequences that require an extra amount of skill to pull off are usually optional with the goal being upgrades or money. This allows the more hardcore gamers to enjoy the tougher sequences and the casual gamer to continue with the main areas if they don’t feel up to the task. The pace of Guacamelee! is quick, and little mechanics like instantly respawning right back at the platform you fell off help keep you in the action and reduce frustration.

Guacamelee! does allow for local co-op play with another player, but it feels like it would be best played in traditional single-player fashion. That being said, the addition of co-op is a beneficial one and simply adds more value to the game if you become bored playing by yourself. Leaderboards are also included with speed run times recorded for different difficulties. This encourages multiple playthroughs, extending the longevity of Guacamelee!

Guacamelee! boils down to sheer, classic fun, wrapped up in a highly stylized world full of fantastic humor and characters. The game’s pace is some of the best I’ve ever experienced and will have you hooked in moments, making you wonder where time went. It is a short game, no doubt, but that is really the only flaw that Guacamelee! has. It is hard to spend $15 on a better game than this, and Guacamelee! deserves your attention.