Garden Warfare 2 is a third-person shooter that has you playing as the titular plants or zombies, battling it out for whatever reason. Each side has a set of unique classes that all have their own abilities and weapons. The Peashooter can speed around the battlefield tossing out Chili Bombs, while the zombies’ All-Star can tackle his way through plants. Each side gets two new classes this time around that add a nice spin on an old formula, aside from one particular bad egg that I’ll discuss in much angry detail later. 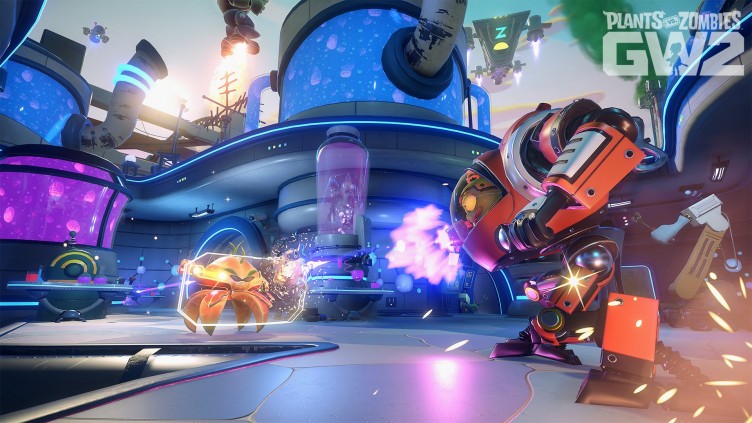 The other big addition to the series is that of a single-player campaign that has you carrying out quests to overthrow your opposition. You receive some mission from a character with forced, quirky dialogue and then head out into the new mini-open-world area to complete some task. This task usually involves activating some objective and then defending it from enemies for a cetain period of time. The mission design leaves a lot to be desired thanks to the repetitive nature, and the more unique quests that are actually interesting are far too rare.

In between these quests in the hub area are Garden Ops. Similar to the main quests, you set up shop at a location on the map, set up some defenses and stave off waves of zombies coming at you. The idea is simple and can be fun to mindlessly pelt hundreds of zombies, but it quickly loses its luster after a few plays. The later rounds end up becoming so chaotic that it’s hard to have any resemblance of strategy. Weirdly enough, you can only spawn additional computer-controlled heroes and not other players to help out. These missions would’ve been far more fun with actual human beings by my side.  The game type is already available to play with other players, so to not have it available in the campaign is bizarre.

Throughout these missions, you collect coins that can be spent on card packs. Each pack is filled with consumables to be used out in the battlefield and cosmetic items to give your characters some flair. The higher-tiered packs give a piece of a new character skin that alters the way that class plays, but it takes ages to fully unlock all five pieces. It feels like its only purpose is to artificially keep you hooked instead of just letting the quality of the game do that. 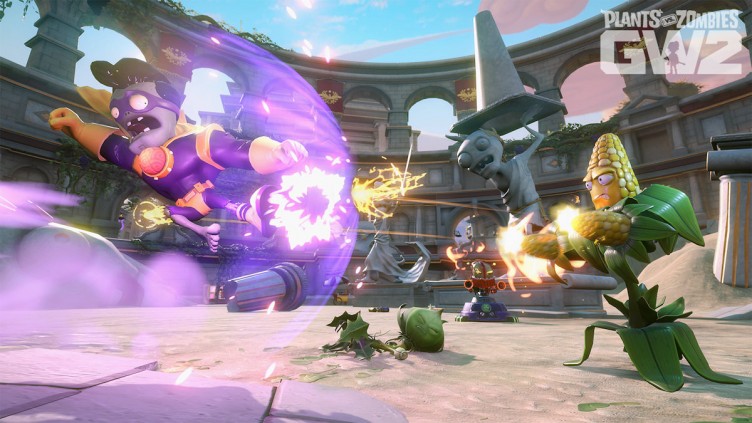 The multiplayer mode is a blast when everything clicks.

The real meat of Garden Warfare 2 is in the competitive multiplayer mode, and it is a blast when everything clicks. What makes it stand out is the fact that the teams are asymmetrical, with plants and zombies having entirely different classes and abilities. Playing on one side is always a different experience compared to the other side, which keeps things feeling fresh. Because there are now six classes per team, there are a wider array of characters to learn and master and different compositions that you can make.

The standout mode for me was Turf Takeover, which has one team attacking a certain position while the other defends. Capture the point, and you get to move on in the map to capture the next point. It’s here where the uniqueness of the classes really take form. The Engineer zombie can utilize his ability to control a turret to lock down a position, while the Sunflower can heal up nearby plants to continue a push. I enjoyed switching up classes to discover a certain counter to the enemy to push forward into victory. This enjoyment did not last long, though.

Remember that bad egg that I was mentioned earlier? Her name is Rose, and she’s a new plant class that breaks the game balance-wise. Her bullets home in on targets and deal ten damage a shot. That’s a lot compared to the zombie Foot Soldier that deals about five damage a shot and has to actually aim. On top of this, she has an ability that shoots out a long-range blast that immobilizes enemies as well as rendering them incapable of using spells. On top of that, she can morph an enemy as well as become invincible for a short period of time. This results in you getting steamrolled if you’re on the zombie side with the enemy team comprised of almost only Rose players firing away from across the map. It is one of the worst cases of imbalance that I’ve ever seen in a video game, and I cannot fathom how this even got into Garden Warfare 2. 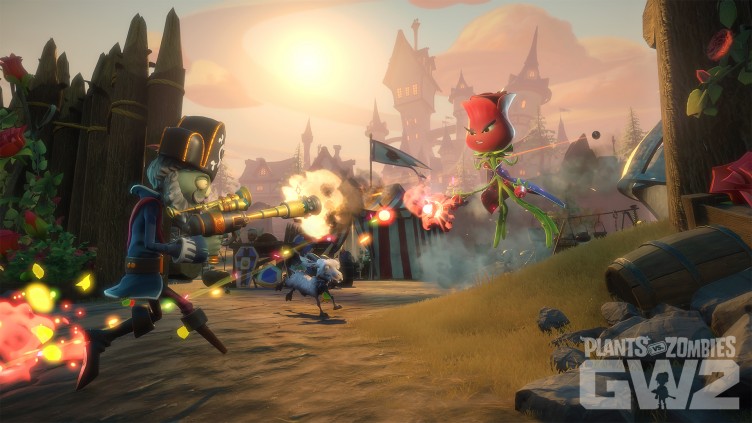 The infamous Rose, probably after she got a 20-kill streak.

This terrible imbalance destroys any ounce of fun in Garden Warfare 2 in two ways. First, it means that, as a zombie, you have little chance at victory in a match as you try to figure out some possible way to counter the onslaught of Roses. Second, it means that all of the other plant classes are comparatively weaker picks. Sure, you can pick the Chomper, but you’re not gonna have as big of an impact as if you were playing Rose.

The Rose issue makes writing a review for Garden Warfare 2 quite difficult as I’m sure that some balance tweaks will be patched in later. Had Rose been balanced from the beginning, I’m willing to bet that I would’ve had a much better time. The reality is that I had a pretty mediocre time with Garden Warfare 2 in its current state. The lukewarm single-player campaign did absolutely nothing for me, and the artificial hook of the unlocking structure left a bad taste in my mouth. With the heart of Garden Warfare 2 in its class-based multiplayer mode being utterly broken due to imbalance, there is no reason to spend the money on this overpriced package when its predecessor already suffices.

Plants vs. Zombies: Garden Warfare 2 is available for Windows PC, PlayStation 4 and Xbox One.