When we think of sequels to video games, we think of how they can build upon and improve their predecessor in meaningful ways. XCOM 2 fully adopts this mentality in creating a tactical turn-based experience that surpasses XCOM: Enemy Unknown in almost every way. Where XCOM 2 fails is in the overall polish of the presentation. Terrible optimization and bugs hold XCOM 2 back from being the truly excellent sequel that it could’ve been.

XCOM 2 is the continuation of the alien invasion that took place in its predecessor, only this time the aliens have officially colonized Earth. You’re in charge of a rebel squad who looks to grow and overthrow the alien overlords. It’s an interesting concept, but unfortunately, it never really explores the potential for such a story. Much of this is most likely because of the free-form structure of XCOM 2’s campaign. The real interesting stories come from the battlefields as you fight perilous battle after perilous battle.

I was almost ready to write off XCOM 2 after my first few hours because of a few painstakingly bad flubs from the developers. The big offender is the atrocious optimization for computers. My PC tends to run most modern games on high settings with a steady 60 frames-per-second (fps) rate, but for XCOM 2, I had to run everything on low settings. Even with the low settings, frames consistently dropped below 20 fps. On top of the bad performance, XCOM 2 is littered with bugs and glitches. A couple of times, I had to reload old saves because of mission-breaking bugs that did not allow me to secure an objective. There’s also just a widespread jank across the game’s systems, with actions sometimes taking far too long to complete or physics acting in odd ways.

Glitches, such as these floating aliens, are not uncommon.

After coming to grips that I was going to be playing this janky mess, I stumbled into my first few missions ready for some tactical action. XCOM 2 is turn based, meaning that you control your squad around a battlefield and take potshots at aliens in order to complete some objective. Every shot has a certain percentage to hit that is affected by different variables, such as their cover and status effects. If your soldiers die, then they’re gone for good. It’s a tightly-knit tactical and tension-filled package that feels incredibly rewarding to understand and master over the course of a 20+-hour-long campaign.

In between missions, you manage an army base filled with different facilities to develop tech. The lab allocates scientists to uncover new research, while the engineers carve out sections in the ground for new provisions to be built. The world map has seen a drastic overhaul from XCOM: Enemy Unknown, with far more emphasis put on time. Across the globe, there is always something to do, whether it be uncovering supplies or making contact with a new region of the world. You have to choose wisely, though, because at any point, an alien attack could break out, forcing you to react or suffer the consequences. For the entire time, the aliens slowly build up what’s called the Avatar Project. The aliens win if you fail to complete the game before it’s constructed.

The entire meta-game between the army base and the world map is wonderfully executed. There’s a real sense of tension managing all the systems while trying to outpace the aliens. Difficult decisions may need to be had, and I love that XCOM 2 expects you to have the intelligence to make the right calls. Sometimes that means ignoring an alien attack so that your squad can fully heal up or choosing to spend your hard-earned cash on new weapons rather than armor. Where XCOM: Enemy Unknown had the tactical combat down, XCOM 2 brings the meta-game up to the same impeccable standard. 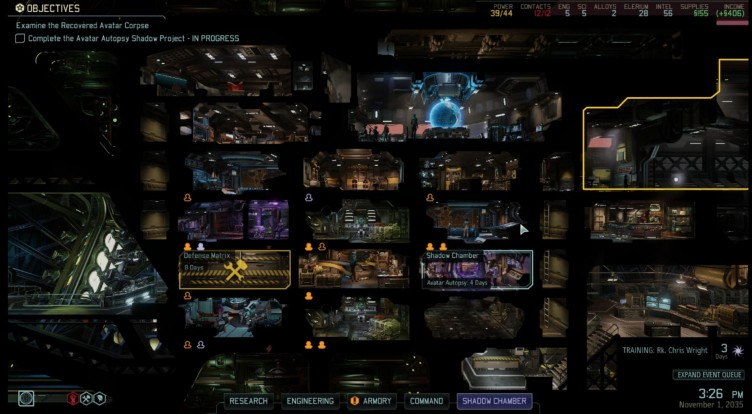 There are loads of systems to manage back at the home base.

The turn-based combat has also seen an increase in quality, coming in the form of buffing up the mission types, soldier abilities and variety of enemies. XCOM 2 doesn’t want you to ever feel comfortable, and the new timed missions are a great way of doing that. No longer are you allowed to move at a safe snail’s pace because objectives must be completed in a certain number of turns. It’s a great and simple way to not only fix a core problem that was in XCOM: Enemy Unknown but also add much needed variety in missions. Luckily, the new Concealment mechanic allows your soldiers to move stealthily at the start of mission. Used properly, it can give you an easy advantage for ambushing some aliens.

The soldiers at your disposal this time around are much more beefed up in terms of new abilities and gadgets to use. I personally loved having two sharpshooters, one focusing on using his pistol to attack multiple targets up close while the other one was using his Kill Zone ability to fire at anything in a field of view from a mile away. On the other hand, the aliens have a wide array of new enemy types that are all unique in their own evil ways. A pesky viper can grab a soldier from halfway across the screen and incapacitate him at the same time that a Sectopod is preparing a massive laser attack on your squad. This fantastic mix of enemy types is great in that no two encounters are alike and each encounter requires different styles of tactics to overcome them.

All of this different knowledge of the vast number of systems and combat ideas didn’t come easily. In fact, XCOM 2’s other giant flaw is how terrible it is in easing you into it. The first few missions are very difficult because your soldiers have abysmal aim and because of the new timed missions. One single, crucial missed shot can set back an entire mission into potential failure. XCOM 2 also throws challenging enemies at you from the start that can revive dead aliens as well as mind-control your own soldiers. Failure to take these guys out quickly can snowball into utter disaster, and there’s no way to know until you’ve fought them before. 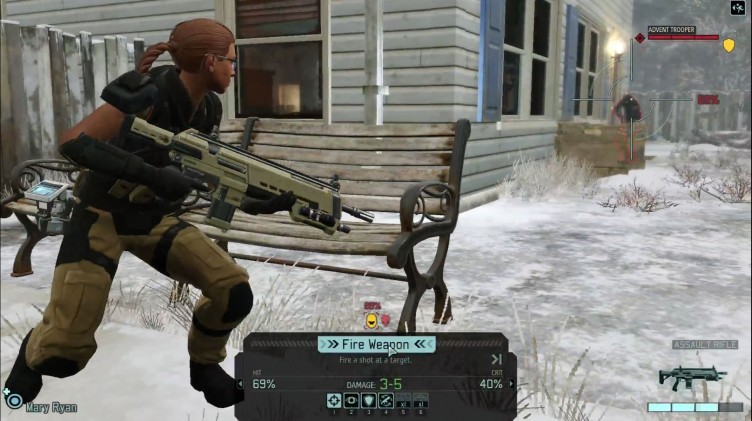 XCOM 2 holds back no punches in the beginning, but the difficulty becomes rewarding as you progress.

I’m all for allowing the player to figure out things as they play a game, but in XCOM 2, it just feels frustrating for new players. This issue is compounded by the fact that, if you have a poor start at the beginning of a campaign, you may very well be screwed five hours down the line when your soldiers just aren’t cutting it. Having just a couple of extra easier missions in the beginning to ease into how XCOM 2 plays would’ve gone a long way.

It’s tough to fault XCOM 2 too much for this, though. Once you get into the groove of things and learn how to properly lead your squad, XCOM 2 becomes incredibly satisfying and addictive. New situations are constantly thrown your way, and adapting to them is exciting. The tension of battle is always there as one wrong move can turn into a catastrophe. There are times where the randomness feels like it’s purposefully working against you, and it can become frustrating to see a soldier die because your entire squad missed four 70% shots against a target in a row. That said, the randomness is part of the overall strategy, and learning to how to properly weigh the risks and rewards is important for success.

It says a lot that, despite XCOM 2 throwing me right into the fire in terms of difficulty and running with terrible performance, I couldn’t stop playing it. It expertly builds upon the core foundation of its predecessor to deliver a sequel that is filled with improvements. Most of all, there’s a certain level of respect that the developers give to the player to create their own path and story. That story is filled with supreme highs when you demolish an alien squad with smart tactical decisions and definite lows when you have a brave soldier get shot down. I look forward to the future of XCOM 2 as patches help improve performance and mods extend the life of the game, but for now, it’s an impeccably fun tactical experience shrouded by bugginess.

XCOM 2 is available for Windows PC.