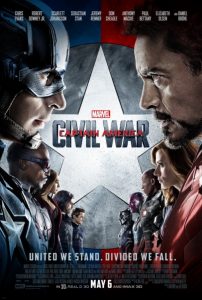 Misdirection is one of the key components of magic and illusion, and the same techniques that work so well to fool magicians’ audiences also apply to moviegoers in the hands of skilled filmmakers. Some characters wear costumes to hide their identities or assume new ones. Others conceal their true intentions with actions somewhere else that keep people from seeing what they really want to do. All of these techniques and more come into play in the latest film in the Captain America series. When is an Avengers movie not an Avengers movie? When it’s released disguised as a Captain America movie. Captain America: Civil War may prominently display a red-white-and-blue shield, but the stylized “A” that is the logo of The Avengers is just as important here because it’s clearly both a better superhero movie and Avengers film than either The Avengers or Avengers: Age of Ultron.

When you get everything right, it makes sense to stay on the same track moving forward. Captain America: The Winter Soldier directors Anthony Russo and Joe Russo and writers Christopher Markus & Stephen McFeely continue their compelling work in this third Captain America film. Equal parts drama, action and comedy, there’s much to discover. Two major plot threads weave in and out of each other in a story that travels all over the world. Steve Rogers/Captain America (Chris Evans), Natasha Romanoff/Black Widow (Scarlett Johansson), Sam Wilson/Falcon (Anthony Mackie) and Wanda Maximoff/Scarlet Witch (Elizabeth Olsen) cause extensive casualties and destruction in Lagos, Nigeria, and world leaders question the status of The Avengers as free agents of sorts with no controls. Tony Stark/Iron Man (Robert Downey Jr.) and others want to sign papers with the U.N. to cede control to a special panel, while Rogers and people loyal to him want to continue as they had been. At the same time as these discussions, it appears that Bucky Barnes/Winter Soldier (Sebastian Stan) is at the center of a number of terrorist attacks. Rogers is not convinced, but Stark wants to bring him in anyway. Members of The Avengers and other superheroes take sides behind Rogers and Stark on the accords and Barnes in repeated showdowns.

The cast should be familiar to fans of the Marvel movies because just about all of the actors and actresses appeared in previous movies. Evans and Downey Jr. share the lead position and have equal screen time with Evans’s scenes tending toward the serious while Downey Jr. enjoys a lot more comedy. The only members missing are Bruce Banner/The Hulk and Thor, so Mark Ruffalo and Chris Hemsworth fans will just have to wait a bit longer. Everybody has a moment or two to shine, and you get exactly what you expect with the cast. Johansson continues to add to her action flick arsenal. The standout performance of a few newcomers to the series is Chadwick Boseman (42 and Get on Up) as T’Challa/Black Panther, a complex character who has his beef with both The Avengers and Barnes. I hope that they bring back Boseman because he conveys an air of elegance and power that fits right in with the other actors. I’ve happily followed Daniel Brühl’s career since Good Bye Lenin!, and he has appeared in such movies as Joyeux Noel, The Bourne Ultimatum, Inglourious Basterds and Rush. His is a welcome appearance as a mysterious figure behind the scenes named Helmut Zemo.

I need to highlight two returning characters and one new hero who was teased in the trailer. Paul Bettany completed his transformation from the voice of Stark’s computer Jarvis to the physical superhero Vision in the previous film. It’s a bonus to see Vision join the team in battle as well as part of their discussions, and the makeup effects artists gave Bettany maroon skin with an interesting texture. Emily VanCamp of Brothers & Sisters and Revenge also has an expanded role, and unlike her previous appearance as a sleeper agent, we finally discover her surprising identity and connection to Rogers. The most fun role arguably goes to Tom Holland as the newest Peter Parker/Spider-Man. Holland plays Parker as a chatty, awkward teen with powers that amaze him, and that extremely geeky take on Parker was not taken to this extreme previously by either Tobey Maguire or Andrew Garfield. Spider-Man brings levity to the battle scenes as well as skills that need a little guidance.

Unlike Batman v Superman: Dawn of Justice, there are real battles between superheroes in Captain America: Civil War that keep its title accurate. Former allies are now at odds, and in a twist on the phrase, they’re sort of civil about it in that they don’t want to kill each other. The major battle sequence is the highlight of the film, and I almost wanted there to be more than one of them. The winning side is the one that brings the best toys to the party, and there are some neat surprises that are revealed in the course of combat. There were countless times in comic books where superheroes were forced to fight each other by common enemies or they might have gone crazy because of a drug, poison, possession, etc. This battle is especially interesting because it’s about a difference in opinion, and the outcome resonates throughout the rest of the film. Buckle up, and enjoy the most exciting hero-on-hero action that you’ll see outside of a video game.

The special effects credits go on forever, so just about every scene in the film involves some sort of effects. The directors show great skill in corralling all kinds of effects and stunts and mixing them together in various quantities. There are plenty of one-on-one fight sequences to show off the skills of the stunt performers and cast, and there are even some impressive vehicle chases to change up the action. I can’t tell what is digitally created and what is real anymore, especially after the advances in computer graphics that lead to work like The Jungle Book. With explosions, jumping/flying characters and character enhancements like Vision’s forehead gem or Barnes’s robotic arm, Captain America: Civil War is as much fun to watch for the effects as it is for the action and plot. I’m especially fond of Captain America’s shield, which has powers and maneuverability that would delight Ultimate Frisbee players.

As much as I was impressed with the plot of Captain America: The Winter Soldier, this sequel feels more complex and complete. In addition to the main plot threads, there are plenty of scenes that develop the backstories for Barnes and Zemo, leading to a dramatic revelation later in the film. Such scenes take the balance slightly over the middle point to lean toward a Captain America film instead of an Iron Man or Avengers entry; despite this concentration, I’ll still call this the best Avengers movie so far. The running time allows for some needed character development, and Maximoff and Vision are recipients of such moments as well as Parker. My only minor gripe is that there are a few talky dead spots amid the action and drama. I’m more than impressed with the filmmakers, and I’m excited that they will continue their roles in the Avengers: Infinity War movies.

Much like Iron Man 3 ranked for me as an outstanding individual superhero movie, Captain America: Civil War is damn near perfect for a variety of superheroes all in the same film. I’m still on the fence about the casting of one minor female role — you’ll know what I mean when you see her — but I’ll withhold judgment until I see more of her in that part. There are plenty of surprises, so you’ll likely leave the screening feeling like a kid at Christmas if you’re into these kinds of movies. Everybody knows that comics legend Stan Lee has cameos in all of the Marvel films. His appearance here is probably one of his best. We have to wait two years until the first Infinity Wars, so until then, enjoy the Avengers who assemble here for an epic battle and its aftermath.