Another year has come and gone and that means it’s time for me to look over the movies I saw that were released in 2011. This year was challenging for several reasons. Personally I had a ton going on that kept getting in the way of making it out to the theater. Also, when I did get there it became clear pretty early on that this wasn’t going to be a major year for Hollywood classics. The highs weren’t quite as prevalent and the lows were pretty bad with everything else trending lower.

The end result was that I managed to see just 32 films for 2011 and it wasn’t until just last month that I was able to fill out my top and bottom five with nominees for best and worst film of the year.

For a complete list of my 2011 films please check out the Movie Review Compendium for 2011.

The five best films of 2011, thankfully, had some competition—if limited. I didn’t have to dig down into 3-star movies to get there and that was my biggest concern at the mid-point of the year. The five (in order of viewing) were Barney’s Version, Midnight in Paris, The Guard, The Artist and The Descendants.

Thinking about each one of these again brought back great memories and each one is fairly unique. Not one of them is even remotely similar to any of the others. We have a personal life story, a fantasy, an action/comedy, a silent film and family love story. 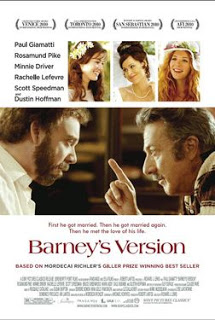 However, after much contemplation one does just stand ever so slightly ahead of the rest of the field and that film is Barney’s Version. I knew when I saw it last February that it would be a tough film to beat. I don’t believe any of the other top films will stay with me anywhere near as long, or as deeply, as this one. Paul Giamatti took home a Golden Globe, thankfully, for Best Actor in a Comedy/Musical but that was about it.

Picky readers might take issue with this selection. This is yet another “cusp” movie (my pick for last year’s best film, The Secret In Their Eyes, was another). It’s officially a 2010 movie, as it’s listed as having been released in September, but it didn’t get a wide release until well into 2011 and I believe that’s its major undoing for some. It came too late in 2010 to really get any interest at the award shows and too early in 2011 to be remembered—and that’s a real shame.

I can’t imagine anyone seeing this film and not being won over by it. I saw it three different times and still can’t wait to see it again, especially with anyone who hasn’t yet experienced it.

On the other end of the spectrum we have, of course, the worst films of the year and they are some pretty bad films though I can only wish they were forgettable. Thankfully none of them quite reach the level of ineptitude as the worst film of the last few years. These are simply terrible movies and nothing more. They are Poetry, Atlas Shrugged, Rango, The Adjustment Bureau and Our Idiot Brother.

Things that make for a terrible movie for me include a totally ridiculous plot, a comedy with no laughs, a horror film without any fright, a poorly produced effort and a film that is just God-awful boring. What makes my selection for this year’s worst film most interesting is that I’ve seen it listed by a few others as their best film of 2011 and that film is Poetry. This movie falls into the last category by being just flat-out boring. If this is your cup of tea then you must enjoy the flavor of plain-old boiled water in a bland cup. I almost want to watch this one again just remind myself of how amazing the differences are between what some people will overlook to recommend a movie.

The reviewers that raved about this snooze-fest need to remember that those reading their reviews are very likely not going to see a study in film-making but are looking to be entertained in some way, hell, any way. This movie fails in every single aspect of that, short of being interesting to film nuts in areas none of the rest of us give a damn about. I have zero doubt that if you screened this for a room of everyday people, and forced them to finish it, a good third of the room would be sound asleep at the conclusion.

It just amazes me to no end that 59 reviewers out of 59 gave this a positive review and that includes 17 of the top reviewers in the industry. It makes me wonder what I’m not getting here but then when you read the reviews the disconnect starts to become quite clear:

“The writer-director…is principally concerned with rendering emotions that seem inexpressible.”

“Those with an eye for reading between the lines can find layers of meaning.”

“…is daring in the ways only quiet, unhurried but finally haunting films have the courage to be.”

The reviews are filled with this sort of praise and it’s not the type of praise that spells “entertainment” to most movie-goers. Emotions that seem inexpressible? Read between the lines? It’s a movie. It needs to not be so nuanced and unapproachable. No one wants a two-hour question of “huh?”