Previously on The Americans: Elizabeth Jennings (Keri Russell) and Philip Jennings (Matthew Rhys) are KGB agents posing as a suburban American married couple in a program called Directorate S. They live across the street from FBI agent Stan Beeman (Noah Emmerich), who is in counterintelligence and spends his life trying to foil the KGB. Stan and Philip are besties and play squash together, Elizabeth and Stan’s wife Sandra (Susan Misner) get along pretty well, and based on some Meaningful Glances over the last few episodes we’re probably working up to the Beemans’ son and the Jennings’ daughter going on a date soon.

In spy land, Stan Beeman has been working a mole named Nina (Annet Mahendru) in the rezidentura, and yes I do mean he is bow-chicka-bow wink-wink-nudge-nudge working her as well as normal intelligence-gathering working her. The Jenningses, for their part, decided that it wouldn’t be too bad if their cover identities got separated, even though they’re still partners when it comes to the KGB. The KGB killed some American scientists and FBI agents kinda by accident; Philip killed Stan’s partner Creepy Chris in a stabby confrontation over who could bang secretary Martha (Alison Wright), also mostly by accident; Stan shot Nina’s friend Vlad while he was trying to eat a hamburger, which was not an accident at all.

“Covert War”: We begin at the FBI, where supervisor Frank Gaad (Richard Thomas) is briefing Stan and the team on a plan to assassinate three high-level KGB operatives. General Zhukov, who was instrumental in recruiting Elizabeth to Directorate S, is on the list. In a flash sideways, we see a well-dressed man break into Zhukov’s plush home and shoot him dead. 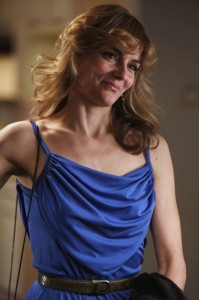 We rejoin the show at the Beemans’ front door, where Elizabeth is about to take Sandra and her hilarious feathered hair out on a date. When they get to the bar, Sandra quickly drinks beyond her tolerance and starts revealing way too much to Elizabeth, including the number of people she’s slept with (two, including Stan) and whether she’s thought about cheating (she has). They hit the dance floor an indeterminate amount of time later. When Sandra sneaks off to call home from a payphone, her son answers and tells her that Stan still isn’t home from work.

Meanwhile, Philip has the Jennings kids for the night and is entertaining them in a suitably depressing fashion with nature documentaries and a fridge full of peanut butter. They go to get dinner from a vending machine and Philip has to wave off a guy who’s peeing in the alley so his kids can buy their Skittles in a nudity-free environment.

Sandra goes home after her night of boozing with Elizabeth and is crying at her kitchen table when Stan gets home, much later. She called headquarters and they told her he had left four hours before and she is convinced that he is cheating on her. She confronts him drunkenly and stomps off. Now, I’ not saying she’s not right to suspect him — he is banging Nina on the regular, after all — but her reasoning in this scene is pretty shoddy. Oh noes, a field agent who works in counterintelligence isn’t sitting in his office the entire time he’s at work! There must be shenanigans afoot! Ah, well. She’s drunk and she’s right, so I’ll give her a break.

The next morning, Elizabeth meets with her handler Granny (Margo Martindale), who tells her that Zhukov is dead. Some guy named Patterson is behind the executions. She goes on to say that Moscow has decided not to retaliate.

In a flashback, Elizabeth visits with Zhukov. He’s woried about her; he can tell she’s unhappy in her new home with Philip as part of Directorate S. He pats a gorgeous golden retriever and tells her that love is a remarkable feeling. His dog isn’t particularly smart or pretty, but he takes care of her and she takes care of him. Without his dog, life would be empty. One day, he says, Elizabeth will find out what it means to love in this way.

Elizabeth waits for Philip to come in to work the next day at their cover job at a travel agency. When he arrives, she tells him that Zhukov is dead and that she is going to kill the men responsible, orders be damned. She briefs Philip on Patterson, the one who Granny said was responsible for the assassination plot. He keeps an irregular schedule but he has a weakness for women. That’s what Elizabeth will use to grab him.

LEGS. Oh, excuse me, there’s a person attached. It’s Nina the hot Russian mole, and she has her LEGS up on her desk in her new office at the Rezidentura. Arkady comes in and his eyes go boyoyoyoing LEGS but his mouth says “It’s okay, it’s your office.” Then his mouth says “I want to brief you,” even though it’s more like he wants to de-brief her, amirite? Okay, I’ll stop. Anyway. They’ve managed to plant a bug in Caspar Weinberger’s library and he wants her to read FBI and CIA communiques to try to find important meetings that might happen there.

Over at Martha’s apartment, Philip is in disguise as “Clark,” Martha’s secret boyfriend. He gets quite a surprise when Martha opens the door this time, though; her parents are there and want to meet him. They make awkward conversation over dinner and “Clark” makes an early escape, but gives Martha a sweet kiss in the hallway as he leaves.

Next, we see a second Elizabeth/Zhukov flashback. She’s pregnant for the second time, presumably with her son Henry, but she hasn’t told Philip yet. Nor, in fact, has she totally decided whether she’s going to keep it. “There are no demands on children in America,” she says incredulously. “All we do all day long is watch them play.” Zhukov regards her sadly, perhaps with some knowledge of how hard her own childhood must have been. He tells her that his dog has died. Sad. 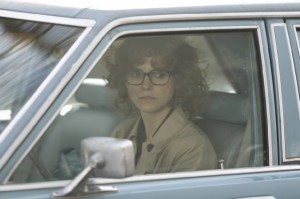 In the present day, Elizabeth is waiting for Philip in a car in a ridiculous disguise: curly red hair, huge glasses, and a scar that cuts diagonally across her mouth. Philip gets in the passenger seat, wearing a goatee that is equally ridiculous. Fantastic. It’s nighttime. They’re in front of a bar, where Elizabeth will try to get Patterson alone by (presumably) being sexy at him.

Sure enough, she walks in and orders a Tequila Sunrise at the bar and spots Patterson in the corner. Patterson makes a choice on the jukebox and then sidles up next to her. She flirts with a heavy hand over his choice of music. She whips out a crossword puzzle book and asks him for a four-letter word that fits into the sentence “Do you wanna ____?” Yes, yes he does. They make their way to the bathroom and start making out. She goes into her purse to get “something,” but it’s a hypodermic needle rather than a condom, and after a frenzied exchange of blows he passes out and she passes him through the window to a waiting Philip.

In the safehouse, Nina is waiting for Stan. She grills him, again, about who killed Vlad. See, maybe I’m reading too much into this, but to me this says she didn’t see him the night before. So, again, Stan was not actually being naughty when Sandra was mad about him being out too late. He tells Nina he wants to stop their affair anyway. Which, that’s a good start, Stan, but you’re gonna have to do better if saving your marriage is the actual goal. Nina takes her shirt off anyway, and Stan can’t resist, so that was a pretty poor demonstration of Being The Good Guy, Stan. I guess you kept it up for thirty seconds. Is that a new personal best? Clap. Clap. Clap. 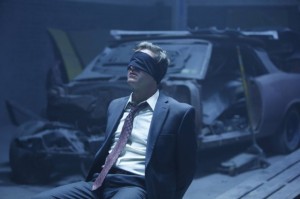 Back in the plot that’s interesting, Elizabeth has tied Patterson to a chair and is keeping him in a warehouse for interrogation. She asks him how it feels to be alive, knowing he will soon be dead like the innocent people whose executions he masterminded. He tells her he’s a bureaucrat; he makes no decisions, he pulls no triggers, he just follows orders. The generals knew the risks of the jobs they were doing, he points out. As did Patterson, Elizabeth points out. As does Elizabeth. She can’t go through with killing him. She feels to the hallway outside the interrogation room and cries. Philip comforts her.

The next time we see Patterson, Elizabeth has dropped him on a bench somewhere in DC, still blindfolded. Later, he talks to Gaad and reports that he was held in a warehouse by a man and a woman. He reports that the woman told him she was going to kill him in retaliation for the murders of the generals, but relented.

We see one more flashback of Elizabeth talking to Zhukov, this time in the spring. He tells her that the reason she was chosen was that her fear makes her strong. She would never surrender, and that’s why the KGB values her. He gets philosophical and tells her that he misses the life he never had — one with a family and love.

Back in the present, Elizabeth comes to Philip’s hotel room with beers to make peace. His things are all packed. He doesn’t want to bring the kids to the hotel again. They talk past each other for a while; Elizabeth thinks he’s coming home, but actually he’s taken an apartment. He’s putting down roots in his new, separate life. Love, a family — there’s a kind of life Elizabeth has never had, either, and maybe never will.

In the final scene, Elizabeth meets with Granny in a car somewhere as it snows heavily outside. Elizabeth has realized that Granny fed her Patterson’s name on purpose. It turns out that Granny loved Zhukov, too. Elizabeth doubts Granny’s motives, as usual. She’s sure that Granny is just trying to get the Jenningses in trouble with Moscow. Then she says, “This isn’t going to go well for you, old lady.” Granny blinks slowly and a small smile creeps across her face. Dang, Elizabeth. I hope you know what you’re doing, because I would not cross Margo Martindale under any circumstances.

Next time on The Americans: The Jenningses are on to a high-level potential source in the missile defense program, and someone’s describing a man and a woman to a sketch artist (although the renderings don’t look much like Philip and Elizabeth, at least not yet).