Previously on The Americans: KGB agents Elizabeth Jennings (Keri Russell) and Philip Jennings (Matthew Rhys) are undercover as recently-separated American travel agents with two children. They live across the street from FBI agent Stan Beeman (Noah Emmerich) and his family. Stan Beeman is sleeping with Nina the hot Russian mole (Annet Mahendru); Sandra Beeman (Susan Misner) confronted him about his lies last week and smashed a glass against the wall.

Philip and Elizabeth blackmailed Caspar Weinberger’s housekeeper Viola (Tonye Patano) into planting a bug in the Weinbergers’ library. Nina the hot Russian mole got promoted at her day job in the Rezidentura; her first big assignment is to follow CIA and FBI chatter to see what important meetings this bug might pick up. Philip, in disguise as “Clark,” is romancing Martha (Alison Wright), who works at the FBI as a secretary for Stan’s boss, Agent Gaad (Richard Thomas). Finally, Stan killed Nina’s friend Vlad (Vitaly Benko) and has been lying to her about it.

At the Rezidentura, Nina and her boss, Arkady Ivanovich (Lev Gorn), chat in Russian about the new responsibilities that come with her recent promotion. Among these new responsibilities is supervising Directorate S. Arkady presents her with a gold pin and a loyalty oath, which she recites back to him. He approves of her patriotic fervor as she says the words. I do, too — this woman has a future in politics.

At the travel agency, Elizabeth tells Philip about Prince and the Air Force Colonel, and Philip is appropriately dubious. Elizabeth drives out and picks up a package of intelligence that is supposed to verify that the Colonel is legit and has valuable information. She examines some microdots and seems impressed. 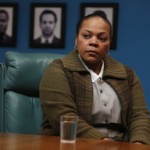 At Caspar Weinberger’s library, the housekeeper is dusting when she comes across the bugged clock that she planted. She looks guilty. The next time we see her, she’s in church listening to a fire-and-brimstone preacher who is getting into the groove as he preaches on Lies and how They Are Bad.

Elizabeth meets up with Granny (Margo Martindale) in an arcade to discuss Prince and his alleged Air Force Colonel. Granny is 100% convinced that Prince’s new asset is legit by the intelligence that Elizabeth picked up — the technical information is too valuable to be part of a trap. Elizabeth is still dubious. Besides, even if the Colonel is who he says he is, he seems to be entirely motivated by money. The Americans could play that game as well, and Elizabeth points out that the identities of agents in Directorate S could be worth a lot more than $50,000.

Granny shuts down Elizabeth’s objections and tells her it’s done; the meeting with the Colonel is set. Later, Elizabeth tells Philip about the upcoming meeting and her misgivings about the op. He tells Elizabeth he’ll get Martha to plant a bug at the FBI for him so they can find out whether Gaad is on to the proposed meet.

At the Rezidentura, Nina cleans out Vlad’s desk. A coworker stops by and tells her Vlad was in love with her. She doubts it — he treated her like a sister — but the coworker says he knew she was out of his league. Later, Nina goes to see Stan at the safehouse. She gets naked and plays into his hero complex with a story about a dream where he rescues her from a fire, and then he admits that he was the one to kill Vlad. Smooth move, Stanno. That will bite you in the ass later — guaranteed.

At Philip’s apartment, Philip and Paige (Holly Taylor) are across the room from each other and throwing grapes into each other’s mouths. It’s pretty impressive, actually — Paige has better aim than any Jets quarterback of the last three years. Elizabeth comes to pick her up, and it’s the classic stop-playing-and-come-do-your-homework buzzkill. After Paige gets carted off, Philip has to get into his “Clark” getup and book it to a dinner date with Martha. 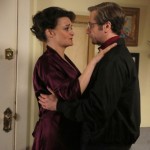 That dinner date is when we find out how Philip plans to get Martha to plant that bug in Gaad’s office for him. He proposes to her — WHAT??? — and of course, she says yes because she is so desperate and so sad. I’m shaking my head at you, girl. “Clark” asks Martha to bug Gaad’s office that very same night. He doesn’t even offer her any explanation. First Stan, now “Clark.” Can’t anyone handle their assets in a remotely professional manner? Jeesh, this show.

Viola’s guilt finally gets the best of her, and she spills the beans on planting the clock bug in the Weinbergers’ library. Stan and Gaad interview her, and Stan brings in a sketch artist to work with her. Later, they go to the Weinbergers’ house and verify that there is, indeed, a bug there. They leave the bug in place for now and plan to feed it some false intel.

Paige goes to the Beemans’ house and listens to Matthew’s band practice.  An ’80s-hot chick with a perm and a shirt that’s been dunked in fluorescence comes and joins in. She plays Matthew’s guitar and is just generally better and cooler than Paige all over Matthew. Paige is sad that her crush has a crush, but that’s what you get for being boring and not doing anything. Nnnnext!

Gaad surprises Martha in his office just as she’s about to plant the bug “Clark” gave her. She jumps just about out of her skin, and really, Gaad is bad at his job for not recognizing a mole when he sees one. Martha is a terrible actor. Later, Martha confronts “Clark.” At first, you think maybe she’s twigged to the maybe-I-shouldn’t-bug-my-spy-boss aspect of the whole situation, but really she just wants to bitch about the secrecy of their relationship again. Ugh. Martha tells “Clark” that she is going to tell her parents or there will be no wedding. “Clark” caves.

Prince gets arrested! That’s the whole scene. He gets pulled over, and the police arrest him.

The next day, we join Elizabeth and Granny as they’re waiting at the courthouse for “Clark” and Martha. Their disguises are fall-on-the-floor hilarious — all pastels and fussy hair and puffed sleeves. They snap at each other for a few minutes before “Clark” comes in and introduces Martha around, claiming Granny is his mom and Elizabeth is his sister. “Clark” and Martha get married by a gentleman who I certainly hope is a fake preacher. After the ceremony, Elizabeth and Philip have a quiet conversation about the failure of their marriage and wonder if they ever had a chance. Nope. Next question! 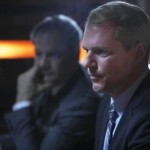 At FBI headquarters, the sketch artist has drawn composites of Elizabeth and Philip based on Viola’s and Patterson’s descriptions. Stan is convinced that the same couple is responsible for both incidents, but of course, he doesn’t recognize his neighbors because he’s bad at his job, just like every other FBI person on the show.

Finally, in the last scene of the episode, Nina goes to Arkady’s office at the Rezidentura and admits she’s been spying for the Americans. She tells Arkady to do with her what he will but asks to be given the chance to redeem herself by betraying the Americans in their turn. Love it. Nina is the only person on The Americans who actively does things to advance her interests — everyone else is just sitting on their hands waiting for things to happen or expecting someone else to tell them what to do. Nina wins the show… again. Maybe she’ll stab Stan in the throat next week! I would watch that.

Next time on The Americans: Shit goes down. The meet with the Air Force colonel is on, and Elizabeth urges Philip to take the kids to Canada. It’s the season finale, so buckle up.