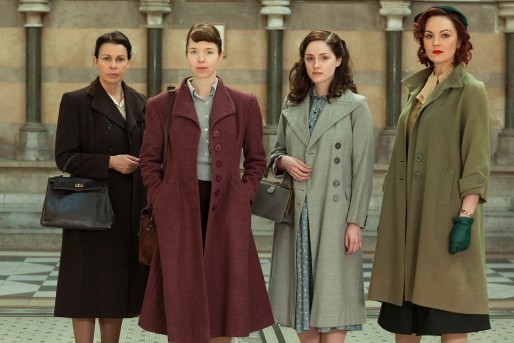 In WWII, young women were enlisted to help the war effort by working as codebreakers at Bletchley Park. The UK’s greatest breakthroughs happened at Bletchley, and the intelligence gathered there is credited with shortening the war by at least three years. Winston Churchill called them “The geese that laid the golden eggs and never cackled”.

Sadly for the codebreakers who worked here, they couldn’t cackle after the war either. The Official Secrets Act prevented them from discussing their contributions, even with family. The men who worked there were often scorned as shirkers who wouldn’t fight, and the women got no credit for serving their country. It wasn’t until 1971 that the silence was first broken – and some maintain their silence even today.

The Bletchley Circle is a miniseries airing on PBS this month that follows a group of four women who were codebreakers at Bletchley Park during the war. Although women outnumbered men at Bletchley by a factor of four to one, they couldn’t claim their accomplishments or enter prestigious professions when the fighting ended. The women in this story have all, in their way, settled into post-service lives far less glamorous than the ones they left behind.

The series begins with a flashback. We see a young Susan (Anna Maxwell Martin) decoding an encrypted message. As she does, she recognizes an odd pattern – the message concerns “Diedrich,” a name she’s seen before, but the two messages taken together don’t make sense. She calls to Lucy (Sophie Rundle), the girl at the next desk with an eidetic memory. Lucy recalls a series of other messages referencing “Diedrich” and reels them off one after another. With the help of friend Millie (Rachael Stirling) and supervisor Jean (Julie Graham), they determine that “Diedrich” is a code within a code; the “Diedrich” messages convey troop movement instructions to the German army. The girls’ discovery gives The Allies a three day head start.

Susan goes to bed that night still glowing. She has done something important. Men – armies – are moving because she spotted a pattern. She’s changed history. She’s saved lives. She may have saved her country.

When we cut to 1951, there’s been a change. Susan’s staring at a new series of numbers now – a knitting pattern for a jumper. She’s a housewife and mother of two, and her husband thinks she did “clerical work” in the war. Her days are occupied with knitting, managing her ration book, playing with her children, and listening to the radio. 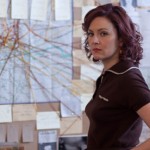 One day, as Susan listens to the news, she hears a report on the discovery of a murdered woman and gets a familiar look on her face. She’s detected a pattern. Sure enough, she’s been following a series of murders with the same M.O. and has tacked a map of the related killings to the back of her mirror. Before long, she recruits the other three women from Bletchley to help her find the pattern before the killer can strike again.

This is a lovely, well-acted period piece that does a thought-provoking job of investigating a historical mystery. No, not the mystery of the serial killer – you can find “mysteries” of that kind every day on every channel. No, the more interesting puzzle here is the women of Bletchley Park – who were they? How have they kept their secrets? What did they do after the war?

The Bletchley Circle airs on Sundays April 21st – May 5th on PBS.