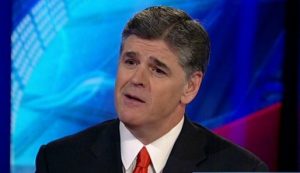 Fox News host Sean Hannity has been under fire of late for his over-the-top support of embattled Nevada rancher Cliven Bundy, who grew quickly famous thanks to people like Hannity giving him a prime-time platform to spew his anti-American rhetoric. Most recently, he and The Daily Show‘s Jon Stewart have been sparring over this issue and Hannity’s handling of it. As almost everyone agrees, Stewart pulverized Hannity in his rebuttal on Wednesday night’s show. The takedown was so complete that many wondered just how Hannity might respond — if he bothered to respond at all.

Then fate stepped in. Bundy opened up his mouth and let fly a litany of vile, ignorant, racist comments that were simply indefensible but entirely predictable. In an instant, every pundit and politician who’d been gleefully riding on the Bundy bandwagon catapulted off as fast as they could manage it. Those comments not only changed the Nevada story forever, but they immediately brought intense focus on the ringleader who gave Bundy top billing at center stage.

Would he also throw Bundy under the nearest bus or, as he has so often done in the past, choose to double down on the insanity? What transpired on Fox News was simply stunning. During the 5:00 PM slot, Fox’s The Five took the baton first. They replaced fellow Bundy supporter Eric Bolling and instead filled his seat with Hannity in a segment called “Ask Sean.” The premise was reported to be a roast but was instead clearly a PR campaign to underscore everything we should love about the man. They recounted his close buddies in civil rights and how he’d worked his way up from nothing to even have a place in that chair. Hannity had an unmistakable aura of defeat all around him. I sat there watching — speechless.

On his own show a few hours later, Hannity pulled out all of the stops in obvious trademark fashion. He started by denouncing everything Bundy said — while also making sure to use clarifying comments like “alleged remarks” — and then came “the shift.” As I’ve noted before, whenever Hannity finds himself without a leg to stand on, his response is as predictable as his hair — he tries like hell to change the subject. Suddenly he’s talking about eminent domain, which has nothing to do with the Bundy story. He recounted case after case involving people and stories he brought to light fighting eminent domain battles (selecting only those stories that had a happy ending, mind you). The footage went back years, which was actually quite hypocritical given that Hannity had just railed on Stewart for doing the same thing in reverse (using similarly old footage to attack him).

He then took a quick but clearly defensive shot at Stewart before moving to the second part of the segment. He introduced a guest who went to great lengths attempting to put Humpty Dumpty back together again. Everything about the whole segment was awkward, including some clear racial overtones. If I didn’t know any better, I’d have thought that we were vetting a potential new Pope.

The problem is that, as far back as I can remember, Hannity’s shows have been prime turf for an endless parade of disgraced “experts.” Ted Nugent, Tom DeLay, Charlie Daniels, Lt. Gen. Thomas McInerney, Jerome Corsi, etc. No nut is too crazy as long as they’re spouting Hannity-approved text. This man is so transparent that I’d be amazed if he could sense his own reflection in a mirror. How twisted can it get? Hannity ripped Stewart for once associating with Yusuf Islam, who supported a Fatwa against Salman Rushdie. But in his own corner, while not only calling Nugent a personal friend, he also opened his radio show for most of 2005 calling for someone to shoot Nancy Pelosi. His ability to ignore the obvious is legendary.

Something happened behind the scenes at the Fox News studios tonight. I suspect that, just as with Glenn Beck before him, Fox will only go so far. Seditious, subversive views have a way of catching up with you, and perhaps, just perhaps, Fox made it clear to Hannity that the crazy train is running too far off the rails.