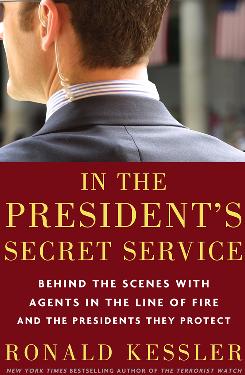 I’m nearly finished reading In the President’s Secret Service: Behind the Scenes With Agents in the Line of Fire and the Presidents They Protect. It’s a book that sounded fascinating based on an interview I saw of the the author, Ronald Kessler, that he did on The Daily Show with Jon Stewart.

The book is supposed to be a behind-the-scenes look at the inner workings of the Secret Service. Initially I found it quite enjoyable and blew through a bulk of it but the further I’ve gotten the more I’ve grown disappointed with it and downright skeptical.

The stories he tells are mainly old stories that simple web searches can provide or that many of us have already known for some time. He, for example, treats President Barack Obama‘s smoking as if it’s a big secret.

However, my biggest gripe with the book had less to do with the general lack of depth and more to do with partisan stories that began to hit you over the head like a ton of bricks. Running down them all (and I’m 80% through the book):

John F. Kennedy – A womanizer (I’ve never heard that before! hehe) who made the Secret Service’s job impossible.

Lyndon Johnson – A disgusting womanizer who treated the Secret Service like dirt and saw them as hired help there to help alert him when his wife was enroute to his current location (often with a mistress).

Richard Nixon – A strange fellow with no love for his wife and with a womanizing Vice President.

Gerald Ford – A great guy who would give every agent a run for their money physically and who did everything he could to help them out.

Jimmy Carter – A despicable fellow who was all show and with a hillbilly family. He saw no value in anything the Secret Service did and micromanaged them to the point of not letting them use tennis courts without his approval.

Ronald Reagan – A wonderful man. He emits Glade air freshener from his ass when he walks and writes out checks to strangers so often that the Secret Service worries about the danger of his pen on his health. Nancy is mentioned in about a paragraph.

George H. W. Bush – He and Barbara Bush are the two best people ever to grace the White House. Barbara does the laundry for agents and makes sure they wear hats, even George’s, when it’s cold outside. Bush went on chocolate chip cookie hunts with agents while Vice President. As President he’d stay in Washington on Christmas for the sole purpose of the Secret Service being able to spend that day with family.

Bill Clinton – I’m just getting into it and already he’s made out as a total disaster. He’s late purposely. He keeps the whole country waiting because he wants a haircut. His wife is a complete monster firing people if a cloud flies overhead. We even are told what a complete jerk Al Gore is and how cheap he is. He also borrows money from agents but at least pays it back. His wife Tipper Gore, who most people are highly-suspect of, is the only one that gets a passing grade with a side-handed compliment about water-spraying agents.

Do you notice a trend here? With the exception of disgraced President Nixon and Vice President Spiro Agnew every other Republican is just a pleasure to deal with while all the Democrats are the lowest order of people who care nothing about the poor agents assigned to them. They’re cheap, inconsiderate, lazy, manipulative, arrogant, backwards, etc.

I put the book down at the point I’m at now and went to Google. I had a hunch about the author and wanted to see if I was right. Wikipedia tells me: “Ronald Borek Kessler is an American journalist and author. He is chief Washington, D.C. correspondent of the conservative news and commentary blog Newsmax.com.”

Great…. Newsmax? I’ve been on that site. It’s a pile of crap. It’s about as balanced as FoxNation. Looking over his stuff there now I find, “Obama’s CIA Actions Belie 9/11 Words”, “Obama’s Speech Remarkable – For Wrong Reasons” and “Gun-Toting Demonstrators Pose No Threat”. This last one from the guy writing about the Secret Service and how hard their job is and yet guys walking around with exposed semi-automatic weapons in crowded, emotional settings are no threat?

Now I have very little desire to finish. It’s not a balanced book full of journalistic integrity. Instead it’s a chance for a partisan hack to take pot-shots at political opponents under the guise of superiority in the form of Secret Service agents doing the reporting. My fault. I should have done my homework on this before I bought it. Live and learn.