Today House Majority Leader Eric Cantor was scheduled to give a speech at the University of Pennsylvania‘s Wharton School of Business. At the last minute he backed out and it’s clear it had everything to do with the audience he knew he’d encounter. That’s leadership? He instead submitted a speech that asks a few questions. I thought it was important that, since he asked the questions, perhaps someone should answer them for him.

“What kind of country do we want to be?” 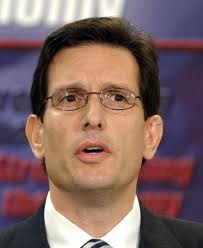 “What happened to the hope of surpassing the success of your parents?”

Nothing happened to the hope. That hope is still there. The reality has changed dramatically however. The economy has gone entirely in the toilet due in large part to those of you in Congress that gutted regulations that allowed Wall Street and the housing industry to gamble with our entire future. They lost and, by-proxy, we all lost. You seem to look back longingly at the period of our history when all of this assault took place.

“What happened to the unyielding American exceptionalism and the sense that in America impossible dreams are possible?”

You realize dreams aren’t actually real right? People are asleep when they dream. In their waking lives things around us changed. American exceptionalism was never anything to brag about. It was only possible due to slavery, child labor, oppressive monopolies, sexism, racism, robber barons, lack of any real governmental limits. It’s amazing what you can do when you only care about your own well being and screw everyone else. Everything was about the almighty dollar and those who didn’t give a rats ass about those around them made out like the bandits they were. The rest of us have evolved. Soon enough people like you will be gone and that’ll be a good thing—a closing of this dark era on our path of continued positive growth as a nation.

The next time you’re on Fox News be sure to tell them, as you have before, how little the Occupy effort matters. Apparently it mattered so little to you that you had to run away from a commitment you made. I’m sure I’ll be seeing you all over the news crying about how Penn changed the understanding you had about who would be in the audience. That sort of thing doesn’t stop true leaders. It only stops those that are wearing no clothes. In this case you seem to be the one shivering in the cold.