Okay, in 44 years on this planet including the inauguration of eight previous Presidents (though I don’t really recall the ones for President’s Lyndon Johnson and Richard Nixon) I cannot recall a spectacle the likes of which we’re seeing now.

My recollection is that Presidents won the race, stayed in the news, and then took the oath of office on the 20th followed by a crazy party that night. Never before can I recall a week’s worth of events leading up to the swearing-in ceremony. 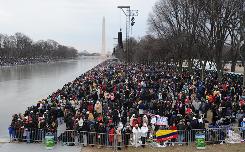 To be blunt, I don’t like it, at all. It sets the wrong tone and it’s one that’s starting to concern me. The first one was “The Podium”. I never before saw a President-elect stand before the press in front of an adorned sign stating his title in such a flamboyant manner—”The Office of the President-Elect”.

Now we get a full week of events leading up to the ceremony. The last time a train ride got this much attention was President Abraham Lincoln‘s funeral procession. Schools are closing on the 20th here. People are going nuts. It’s not a good sign and the fact that Barack Obama is not only allowing it, but seemingly reveling in it, does not start this administration off on the right foot.

The country is reeling and that, in part, probably plays into the situation at hand. However, President Obama (I think it’s safe to call him that now—at least before we have to call him “Your Majesty”) should be the first to see this for what it is and how it comes off and refrain from it.

I had a small pebble of concern with the podium thing. Now it’s grown into a much larger doubt with this procession. Time will tell if this is a fad or a trend. Let’s hope it’s a short former.