Today I’m reading the latest news and I trip over a story about one of the current cases before the Supreme Court—The City of Ontario vs. Quon. 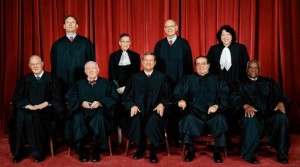 The main thrust of the case is to determine the privacy rights of employees when they’re using company-provided equipment like cell phones and pagers. The case involves Sergeant Jeff Quon and three other plaintiffs who sued Ontario’s Chief of police for reading their sexually explicit messages to each other. We can all agree that the plaintiffs are clearly in a league of their own when it comes to being immeasurably stupid. It also turns out that the plaintiffs include Quon’s wife AND mistress. Ouch.

The scary part is in the understanding of the case with respect to the various justices:

Chief Justice John Roberts inquired as to what the difference was between e-mail and a pager.

Justice Anthony Kennedy wanted to know what would happen if a text message was sent to an officer at the same time he was sending one to someone else. He asked, “Does it say: ‘Your call is important to us, and we will get back to you?’”

Justice Antonin Scalia couldn’t understand the role the service provider plays by commenting about the message, “You mean it doesn’t go right to me?” My favorite part is what he asked next. “Could Quon print these spicy little conversations and send them to his buddies?”

Print them out to send them to his friends? What if he wants to fax them? Heck he could send them, via smoke signal, to his friends all over town as long as he used some form of smoke encryption device to obfuscate the actual content from prying eyes.

Meanwhile no one seemed sure about what happens when messages are deleted by those who send or receive it. Justice Samuel Alito asked Quon’s attorney if this would prevent the city from retrieving those messages later from the provider. Initially the attorney said that deleting them would prevent them from being retrieved only to later admit he didn’t know when pressed on this again by Alito.

That such a case would be heard by a body of individuals so disconnected from the entire concept is just flat-out scary. I’m hoping experts are brought forth to fully explain the technology. What I’d really like to see is video of each of the justices being trained on the use of a cell phone and texting. You can just imagine the awesome texts Justice Clarence Thomas would surely send off to Justice Sonia Sotomayor—all in good fun of course.