It was nice to see Sanity win a victory last night after my return from the Rally To Restore Sanity last weekend.

I’m actually heartened by what I saw last night regardless of party. While Republican fans across the nation are celebrating (and they should) recent history clearly shows they should enjoy it now as these celebrations tend to be short-lived.

As far as sanity is concerned let me first mention the losses of Carl Paladino and Rich Iott. Paladino’s the renegade candidate for New York Governor who boldly threatened a conservative journalist with the famous words, “I’ll take you out.” His concession speech was a sight to behold. It included a wooden bat that he practically threatened winner Andrew Cuomo with in conceding. Then there was Iott, the House candidate from Ohio who thought it was just fine to run around in Nazi SS regalia on weekends as a hobby. He lost to incumbent Democrat Marcy Kaptur by nearly 20 points. 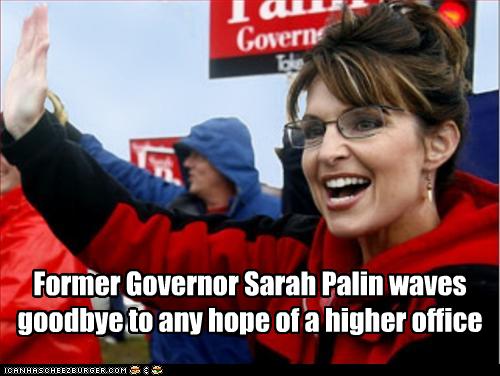 But what I came away with above everything else was the clear message that America has heard Sarah Palin‘s message and soundly rebuked it.

Nearly all of her most visible selections were defeated. Yes, there’s the big win of Rand Paul but it gets very thin after that. Christine O’Donnell, Sharron Angle, Joe Miller , Carly Fiorina and Ken Buck have all lost or are well on their way to losing. O’Donnell and Angle were most notable in their loses. A blow-up punching bag should have been able to defeat beleaguered Senator Harry Reid given the state of affairs in Nevada and, as has been well covered, O’Donnell’s run cost the Republicans a sure win in Delaware. This will be heavily downplayed on the Right but a RINO is preferable to a Democrat if you’re on that side so no amount of smoke is going to cure that damage. By the way. I can now agree with Christine O’Donnell’s commercial statement, “I’m not what you’ve heard. I’m you.” Yep, neither of us have a future in politics in Delaware.

This also tells me that Palin is done. There’s simply no way she’s going to be able to take this showing and parlay it into a successful Presidential run in 2012. The American public has spoken and in a year when her message should have resonated instead it fell short just like her last effort.