I’ve been waiting on the Creative Labs Sound Blaster X-Fi generation of sound cards for quite some time now. I’m still not entirely sure what Creative is claiming this new level of sound engine is supposed to provide. The marketing is a bit of a thick soup-like substance.

Well, the products are finally available, at least in limited numbers, so I finally got one today. 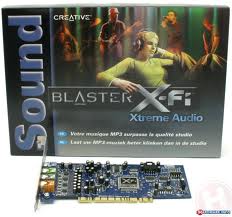 I decided I wanted the Fatal1ty FPS version instead of the top-of-the-line Elite Pro model. The main reason for that is that, based on my troubled experiences with the Audigy 4, I’ve become a critic of their external control box approach. The design introduces unwanted noise on the headphone jacks and the connections often needed to be seated JUST right or else you’d have other intermittent noise problems.

The card showed up today and, so far, I’m rather impressed. The biggest thing that jumps out at me is the clean sound you get out of the “24-bit Crystalizer” feature. Everything coming out of the card right now just sounds fresh and full of life. It’s as if my speakers have suddenly gotten a major upgrade.

However, several little gotchas have materialized already. After installing the card and the Live Drive device (which doesn’t suffer from the same problems as the external box, oddly enough) and rebooting Windows XP, Windows found the new hardware and prompted me as to what action to take with regard to installing drivers for the product. Creative’s Quick Start guide instructs you to select Cancel and then launch their CD-based installer. I followed the directions only to have the installer crash each time I launched it.

Not being entirely new to these sorts of problems, I rebooted and pointed Windows to the right folder on the CD to install the core drivers, which it did, and I then had sound but none of the ancillary software.

I then called customer support to find out how to get around this. Much to my surprise, it turns out that the problem comes down to a file in your Windows/System32 folder called “QuickTime.qts”. Apparently this QuickTime file, used by both Apple‘s QuickTime and their iTunes software, conflicts with Creative’s setup utility and needs to be renamed for the setup to launch. Once everything gets installed you can just rename it back to what it was and you’re all set.

I have to seriously question any quality assurance process that doesn’t identify a crash bug caused but such common software. It’s not like Creative can claim that QuickTime and iTunes aren’t all that popular these days. Clearly this problem is going to impact a large number of customers and how many are going to call support to find the solution?

Once I got past that problem I then found that, for the first time using a Sound Blaster, my audio was reversed. Left was right and right was left. I also noticed that the sound out of the left speaker was significantly lower than what was coming out of the right speaker.

Turns out I needed to install and go into the new THX configuration setup and assign the speakers. It took a couple of passes to actually get the settings to stick but I did get them assigned correctly. Then I had to go to a configuration screen to reduce the volume on the left speaker by 5dB to get it in line with what was now being correctly sent out of the right speaker. I’ve never had this imbalance issue with previous sound cards so now I’m very suspect of what Creative is doing here.

However, as I noted earlier, once I got all this addressed, the end result has, so far, been excellent sound. Next up I need to go find examples of improved performance that Creative seems to be claiming the X-Fi provides. I have my doubts.