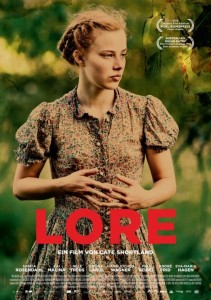 A teenage girl in Nazi Germany is left to look after her younger siblings in the closing months of World War II in Lore.

There are few subject matters that have been the focus of more films than the Holocaust. Countless films have covered the period from virtually every conceivable perspective to the point of possible Holocaust overload. Every so often, another story still comes along that manages to provide something original and worthwhile. Lore attempts to break through that barrier with a tale that focuses on the young daughter of a Nazi SS officer who knows only the propaganda she’s been told by the government and her parents. As the war comes to an end, her innocent notions about the world around her come crashing down. She believes — as did many at the time — that final victory is just around the corner even in the face of obvious examples to the contrary.

Her devastated father is forced to surrender to the Allies and says almost nothing about it to his young daughter or her siblings. He tries to do what little he can to protect them, but that’s of small consolation. Then her mother is forced to join him, leaving 14-year-old Lore (Saskia Rosendahl) and her four siblings to fend for themselves in the devastated countryside. Almost immediately, the enormity of their situation comes down on the unprepared child. Her youngest sibling is just an infant in constant need of attention and fraying everyone’s nerves with his constant crying. The stress mounts as food becomes increasingly scarce and Lore sees only one way out — a dangerous cross-country trip to her grandmother’s house where she’s not at all sure what she’ll even find.

Along the way, she’s forced to begrudgingly accept the help of a young man going by the name of Thomas (Kai Malina) who harbors his own secrets.

The film presents stunningly rich visuals that easily convey the time period beautifully. The music also adds to the persistent tension that permeates every scene.

As the story unfolds, there are a number of confusing elements. Why doesn’t the father say more — to anyone — about his fate? Surely, he could have a frank discussion with his wife. We’re left to assume that this happens off screen, but why? We’re not entirely clear on why the mother is later forced to abandon her children. We’re also not given much information on several neighbors Lore is initially able to get help from. The final resolution is also not all that satisfying because it doesn’t really look beyond the time of the story. Added to this are a few scenes that are a bit too long without really moving the story forward. It’s also very difficult, even today, to fully empathize with pro-Nazi Germans even when they’re obviously ignorant of the bigger picture. We still want to cast blame, and any story from such a perspective gives the audience some pause and a slight sense of feeling dirty.

The end result is a somewhat novel approach to the genre with a clear attention to detail and wonderful performances that make for a worthy experience.