For some time now I’ve wanted to try out a fairly new board game called, 1960: The Making of the President. Something about it sounded like my kind of game. 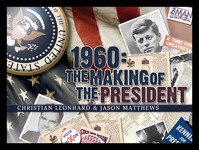 I got a chance to play it Wednesday night and was so taken with it that I did something I rarely do and played the same game twice in the same night.

1960: TMotP is a 2-player game that immerses you and an opponent into the depths of the famous campaign of 1960 between John F. Kennedy and Richard Nixon. Before 2000 this was the most contested campaign in US history. It went down to the wire and has been contested and debated by scholars and pundits since.

The game does a tremendous job of bringing home the feeling of being there. It mainly takes place across a large map of the country that features wonderful artwork and a great overall look. The pieces, especially the event cards, are first-rate. They’re made of very durable material and look like they’ll hold up for years. Plus the detail that went into them is excellent. Seemingly every event and major personality of the time is represented here.

The game takes place over 9 turns. You play 5 turns before heading to the famous debate then two more turns and finally the election itself. During the main turn you choose actions from the event cards to direct your campaign. It’s all about resource management. Where do you campaign? How much advertising do you do? How much emphasis will you put it the events of the day (Defense, Economy and Civil Rights)? Do you bother with going for endorsements? How much rest will you require? All of these items must be well balanced and the game does a great job of making them all count in an equally balanced way. If you don’t get enough rest then you’ll come up short when initiative is at stake or when you need a critical bit of luck.

Battles will wage back and forth. Your candidate will look to be turning the south towards them only to have the other candidate steal it back with timely plays of their own. In both the games I played (against two different players) all three of us were entirely unsure of the outcome. We could just as easily believe we’d win as lose. Tensions ran high as we calculated the final electoral college votes to see who won. Just as in 1960 the necessary count was 269 votes needed to win. As both sides drew closer the tension grew in parallel.

The first game I took over the Kennedy campaign and won by about 40 points or the margin of one large state. In the second I played as Nixon and won by 47 points and again it came down to one or two critical states being the difference. All three of us thought this was one of the best games we’ve played in a long time. You could look back and lament earlier moves both made and unmade. If only you’d spent one more day in California. If only you didn’t waste time in Hawaii. 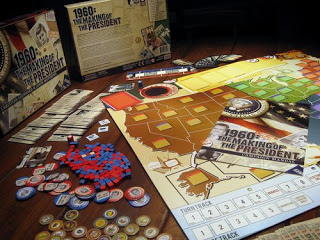 What’s even more interesting is that this would make for a wonderful educational experience. It really does showcase the major elements of any election and provides a historical reference for anyone interested in this particular moment in time. It’s all here. Jackie might show up and woo the electorate causing Nixon to have to work much harder to regain momentum. Will Eisenhower endorse Nixon in time or will his silence go on long enough to raise questions? Will the Catholic issue bring Kennedy support or will it hurt him? Will Nixon’s “lazy shave” doom the debate for him? Can Kennedy get Lyndon Johnson to join him on the ticket nearly assuring him Texas as a result?

The cards allow for all of these to be present but each game is different as you may get each card at times where you need to go in other directions than those historically followed. Opponents can also play cards that restrict your options.

The bottom line is that I haven’t enjoyed a game this much in a very, very long time. I felt invigorated by the whole experience and can’t wait to play it again and expose others to it. I can’t possibly recommend it enough. It’s not the lightest game out there. The manual is a bit lengthy and games can easily run 2 hours but it’s worth every minute of it if it sounds even remotely interesting to you.